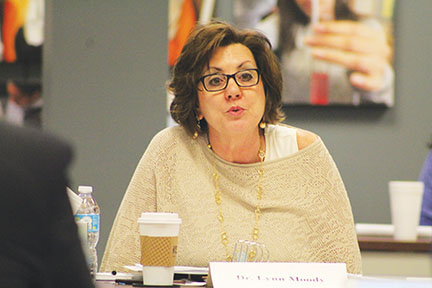 SALISBURY – Lynn Moody, superintendent of Rowan-Salisbury Schools, joined a panel discussion Friday that was hosted by the School Superintendents Association and featured some of the top public education leaders in the country.

The “Pivot to eLearning at Scale: K-12 Leadership Test” webinar focused on the nationwide mass adoption of remote learning as the way districts are coping with extended school closures due to the COVID-19 pandemic. The virtual gathering was moderated by former associations president and 2018 Superintendent of the Year Dave Schuler and included the association’s 2020 Superintendent of the Year, Gustavo Balderas, of Eugene, Oregon, and Eric Williams of Loudoun County, Virginia.

The discussion included steps the featured districts have taken during the closure, including meal distributions that serve students and their families, as well as how the districts have become more integral to communities where mandated temporary business closures are leading to mass unemployment and increasing food insecurity.

“We’ve really become, as schools, hubs of a community in ways that we haven’t served before,” Schuler said.

“That was really rewarding to watch that happen,” Moody said.

Moody also described the district adapting remote learning and making the decision to turn Wednesdays into teacher workdays for staff and for students to catch up on assignments.

“Not just students, but teachers had struggles with internet, and families with four devices on at the same time,” Moody said.

Remote learning has come with challenges for instruction. Moody said school officials would prefer to have students in the classroom and the district has not been able to reach every student. Some students are either nonresponsive or unwilling to turn in work.

Schuler said four superintendents were asked about their biggest challenge during a webinar last week and said it was keeping up with kindergarten and first-grade reading.

Moody said almost 1,200 students in the district have not been in contact with schools since the closure started. About 600 of those are in elementary school.

“That’s what’s keeping us awake at night,” Moody said. “How do we reach them? We know they have technology, we just don’t know why they’re not engaging, and I mean it can be a variety of reasons.”

Moody said the staff recently decided to put together bookbags with materials to try and reach students who are not engaging via technology, and will be working with school resource officers to deliver the bags to the families.

Schuler said the first quarter will have to look different from this past year so achievement gaps don’t worsen during the closures.

Another challenge is providing exceptional children education, which is normally adapted for students.

Balderas, with a nod to Moody, said his district is working with families to make sure students’ needs are met, and closures have made students who are already marginalized even more so.