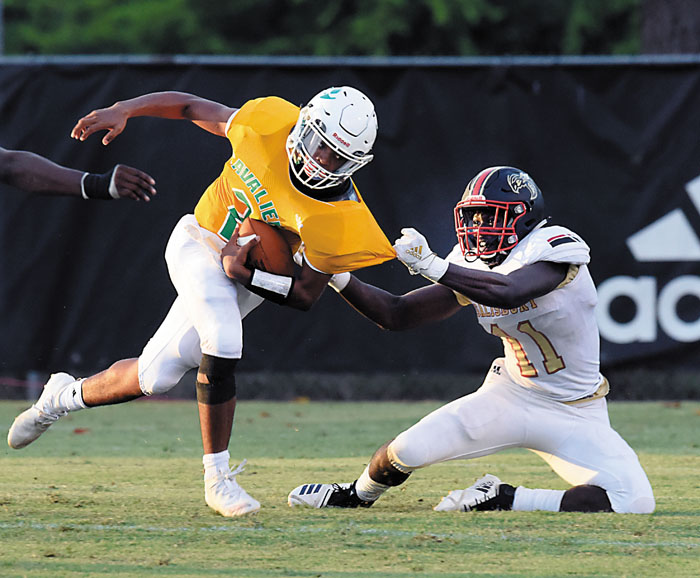 North Rowan’s Malcom Wilson tackled by Salisbury’s Jalon Walker during a game on Aug. 22, 2019. Photo by Wayne Hinshaw, for the Salisbury Post.

Salisbury finished a distant fifth in the six-team county meet last spring when the Hornets’ squad basically was sprinters Tyrone Johnson and Jayden Gibson and hurdler Christian Morgan, but that wasn’t going to happen again.

The Hornets had gotten a major chunk of their state-runner-up football team out for track this year, like they used to do in the old days. A lot of fast guys and some big guys. Walker, Jabril Norman, J.D. Wood, JyMikaah Wells, Donavan Corpening, Max Morgan, Lawon Blackwell, Jacquez Peele, T’kai Gaither, Jaden Hiligh, Wayne Wooden, Reed Fugle — and maybe a few more. A small army of sprinters, jumpers and throwers.

“We did have a nice team,” Walker said. “We only had one actual meet, but we did win it. We were having fun. Most of us will be able to compete against next year. We’ll be back.”

Back in March, before it was shut down by COVID-19 concerns, track and field was providing a pleasant distraction for Walker, who may become the most highly recruited high school football player in Rowan County history. Walker, who turned 16 in February, is 6-foot-3, 205 pounds, with a textbook linebacker frame and a lot of growing ahead of him.

He’s about as athletic as it gets. In the only track and field meet of his high school career, he won the long and triple jumps. He only placed fourth in the 100, but the guys who edged him were 150-pound guys who can move.

In basketball, Walker averaged about 4 points per game — and made all-conference. That tells you what kind of impression he made on Central Carolina Conference coaches as a rebounder, defender and shot-blocker. He may have changed the criteria for the All-CCC team forever. He also made second team All-Rowan County.

His grades are the kind of grades you’d expect to see from a 105-pound kid who spends all day in the library. He’s got a 4.0 GPA, something that sets him apart from dozens of linebacking prospects who might be just as tall and just as fast.

“Jalon has become an awesome young man,” Salisbury head coach Brian Hinson said during football season. “In the halls, in the classroom, in the weight room, and on the field, he leads. He’s a role model for the young kids. He’s very mature for his age, very motivated.”

Walker’s parents are employed by Catawba College (father Curtis as the head football coach since he was hired late in 2012 and mother LaSheka as development officer). Curtis, an All-America linebacker at Catawba, is in the Catawba and South Atlantic Conference halls of fame. LaSheka, a Winston-Salem State graduate, was a good basketball player at North Rowan High.

So Jalon’s athletic ability isn’t a shock, but neither is his classroom effort.

“If he wasn’t making great grades, he wouldn’t even be allowed to play football,” Curtis said.

Walker was a very good player for the Hornets as a varsity freshman, but his stock has risen sharply in the past year.

He took a leap as a sophomore, taking over some games. There were Fridays when he took a side of the field away from opponents. His ability on the outside allowed Salisbury to play either a 3-4 defense or a 4-3 without changing personnel. That was a decided advantage. Hinson also made use of Walker as a receiver. He was a taller target than the Hornets’ other wideouts and came through with some key catches. He scored four touchdowns, three on offense, one on defense. He made the all-county team.

In March, Walker was elevated from a three-star recruit to a four-star recruit. Four-star recruits are scarce. There are just 10 football players in North Carolina in the Class of 2022 who are deemed worthy of four stars. Nationally, Walker is ranked among the top 15 outside linebackers in his class.

An Auburn offer came on April 10. Obviously, there will be a lot more offers from the ACC, the SEC, and elsewhere.

“I’ve been enjoying it all, enjoying the process,” Walker said. “I’m happy so many schools from so many conferences are interested. It means great opportunities. I can’t make any visits now (due to COVID-19 restrictions), but I can tell you I’m looking for a place that makes me feel at home, a place where they do the right things, a place where I fit the defensive scheme. The academic and athletic combination is going to be really important.”

Walker had planned to visit Auburn, Louisville, Georgia and Clemson, but with COVID-19 changing lives, there are no visits being made anywhere. Not before May 31, anyway.

His father reminds him to have fun, to enjoy being a 16-year-old. There’s no hurry.

Walker insists that his recruiting is “wide open,” that he’s completely open-minded, but there probably are some favorites.

UNC has recruited him longer and probably harder than anyone.

Curtis Walker probably has been the most thrilled about the offer his son received from Arizona State. Herm Edwards is the head coach at Arizona State, while Marvin Lewis is co-defensive coordinator.

Officially, Clemson hasn’t joined the long list of schools offering, but it will become a leading contender whenever it does.

Walker has been a regular at Clemson’s camps for years, made an unofficial visit to the Tigers in March and was set to attend Clemson’s Spring Game in early April before everything was canceled.

“I hated to miss that,” Walker said.

Offers for Walker continue to come in via Coach Hinson. At this juncture in the recruiting process, Walker can make calls to schools, but they can’t call him.

Walker says his only established timetable is that he’d like to make a decision prior to his senior year.

He’s in a strong enough position academically that he expects to be able to graduate from Salisbury a semester early — in December of 2021. He plans to enroll at his college choice for the second semester of the 2021-22 academic year to get a head start on football and class work.

“That’s a big thing,” Walker said. “I want to excel in both areas, academically and athletically.”