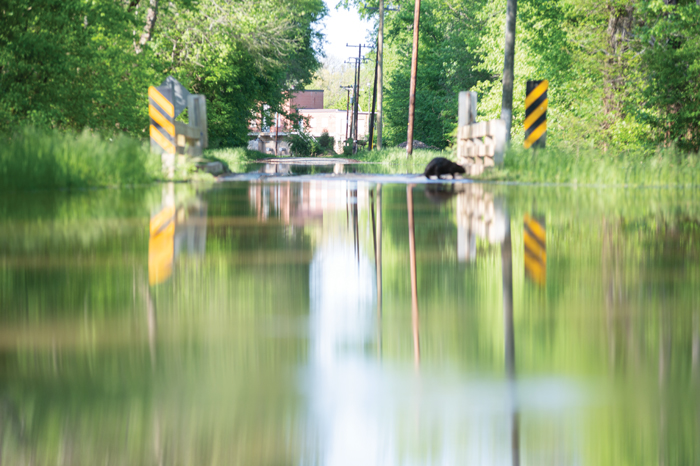 Josh Bergeron / Salisbury Post - Water covers the road leading to the Salisbury-Rowan Utilities pump station in northern Rowan County as a beaver crosses the bridge over a creek nearby.

SALISBURY — City officials are pushing back on a federally-approved plan that it says fails to solve flooding problems at the water supply pump station on the Yadkin River.

The city filed an appeal Monday to the Federal Energy Regulatory Committee requesting a rehearing on a decision approving Cube Hydro’s, the owner of High Rock Dam, plans. In the appeal, the city states High Rock Dam is the cause of the flooding and sediment buildup at the pump station, which is the city’s sole source of water on the Yadkin River.

“It isn’t our pump station that is causing the flooding,” Mayor Karen Alexander said. “It’s the sedimentation build up created by the dam and the Cube Hydro operation.”

The city has two issues with the approved plan: it doesn’t provide flood protection for the water supply pump station building and the access road and doesn’t address sedimentation build up, which increases flooding.

FERC approved Cube Hydro’s plan March 12 after the hydropower company proposed to implement some of the required flood plain measures in 2018. The city had 30 days to appeal.

During a Feb. 6 flooding event caused by heavy rain, Hannah Ferry Road, the access road to the pump station building, was flooded; flood waters were 18 inches from entering the building. Salisbury-Rowan Utilities, which supplies water for 52,000 customers across Rowan County and water for 85% of businesses, had to take action. They turned off the electrical system, which stopped the pump station from taking in raw water.

After SRU employees waited for the flood waters to go out, they had to access the pump station by boat with first responders on call in case of an emergency. Employees determined if the facility was secure and the electrical equipment was dry.

The pump station was down for two days, but customers were not affected because Salisbury-Rowan Utilities has storage to last three to four days. The utility also has an agreement with Statesville’s water utility and a water shortage response plan that is typically used for droughts.

The Cube Hydro plan has no flood protections proposed to prevent future, similar incidents. Corriher said the pump station property will continue to flood under their plan. Among other things, the approved plan calls for electrical equipment to be moved up the wall and to create a mezzanine to work on the equipment while the pump station is flooded.

“Their proposal is to use an amphibious vehicle when flooding is relatively minor and use a boat when flooding is severe,” Corriher said. “As for the pump station itself, the improvements recommended in the plan are to move the electrical and pumping equipment above the 100 year flood line.”

Corriher said employees would have to wade or swim inside the building during a flood.

Behmer said Cube Hydro hasn’t done structural analysis to determine if a mezzanine is possible. Working on electrical equipment is unsafe for employees and would not meet electrical code, he said.

Mayor Karen Alexander said Cube Hydro’s plan was “woefully inadequate” and “to say that you would put people in jeopardy is just incredible.”

Multiple engineering firms, including Charlotte-based Black and Veatch, agreed the design elements should include: a dry pump room floor, no obstructions, easily accessible electrical equipment and an access road drivable during flooding.

Corriher said the city is asking for a plan that protects against flooding in the pump station and on the road, which was covered with multiple inches of water on Tuesday.

“If we can have dry conditions on the road and dry conditions inside the pump station, assuming it’s all well-engineered work, we will be satisfied because we think that will satisfy the constituents,” he said.

Behmer said the city does not prefer one particular method of preventing flooding, just one that identified problems.

The North Carolina Department of Environmental Quality has two conditions that Cube Hydro’s plan doesn’t accommodate, which is stated in the appeal. The department requires the company to remove sediment at the City of Salisbury’s water supply intake and to develop a sedimentation and flood protection plan to protect the intake, pump station and access road.

The state also submitted a letter that was included with the appeal.

Alexander said the support of DEQ is a “key factor” in getting a rehearing.

What’s next is in FERC’s court, Corriher said. A response could come in 30 days or later.

Behmer said he wants to see all design flaws corrected in a plan by the end of the year. He doesn’t want the protections to be delayed anymore. But a solution is still at least two to three years away, he said.

Behmer said the dam owners are responsible for the flooding and sedimentation, and that SRU customers shouldn’t be footed the bill.

“It’s caused by the dam and the dam owners,” Behmer said. “I have a hard time having our rate payers have to pay for something that is not caused by us.”

‘What are we supposed to do? Die here?’: Citadel…