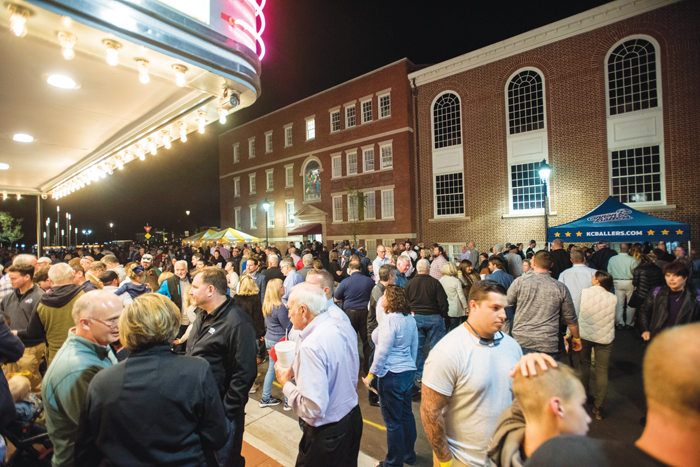 Gatherings like this one seem such a thing of the past, but it was only in October when Kannapolis baseball officials released the name of the new team that will play in a 4,900-seat stadium downtown. SALISBURY POST FILE PHOTO

SALISBURY – Waves of event cancellations and program changes in the wake of the COVID-19 pandemic are leaving community organizations and institutions with financial challenges and uncertainty.

Cancellations began en masse in mid-March immediately before Gov. Roy Cooper issued an executive order for all public schools in the state to close to prevent spread of the respiratory infection.

Barber shops, salons, theaters and bars have had to close. Some restaurants have closed while others have stayed open for take out and drive through service and some retailers have closed. Seasonal business as well as nonprofits and educational institutions that rely on fundraising have also been hit by the pandemic.

This is the 100th anniversary of the Salisbury Rotary Club, which the club planned to celebrate the event in May and has pushed back to October, Communities in Schools canceled a major volunteer appreciation event, Kannapolis’ Jiggy with the Piggy has been postponed and the Rowan County Chamber of Commerce canceled an international trip to Spain.

These are just a few of the events which have been put on hold or canceled altogether in the wake of the pandemic.

Programs being canceled can also impact revenue for the places that host them. Catawba College Dean of Students Jared Tice said an important piece of the college’s revenue comes from third parties renting facilities for events, though the college hopes to receive support from the $2.2 trillion stimulus packages passed by Congress.

Local colleges have had to cancel donor luncheons as well — something Tice said encourages sustained and continual giving from donors who meet scholarship recipients face-to-face at Catawba.

Despite the hardship created by the pandemic, Tice said there are “heroic donors” in a tough circumstance and that the college is trying to support students through its emergency fund, with expenses like rent, car repairs and travel costs.

The Kannapolis Cannon Ballers, which just built a new stadium and went through a total rebranding for this year’s season, had to put its season kickoff plans on hold due to the pandemic. After almost a year of anticipation, the new ballfield, name, mascot and team office are all on hold for their public debut at a game. The team had to cancel a competition in March to pick National Anthem performers. The team had to cancel an open house planned for April 6, too. That’s in addition to the game debut of the new stadium, which would have been Thursday.

“For eight months, we’ve been working around April 16 to just have the pause button pushed on us,” Millward said.

Millward said a major revenue stream for Major League Baseball is media rights, but for the minor league, ticket sales are “roots at the trunk of the tree.” Now, the entire Minor League Baseball season is in limbo as COVID-19 continues to spread throughout the country.

Millward added there have been talks about extending the season for a few weeks, which would end on Labor Day under normal circumstances, and the team is still hopeful.

“It’s going to be gangbusters. There will be baseball fever,” Millward said, adding that even after things begin to return to normal the team understands there may be part of the population still uncomfortable in the stadium.

Chamber Executive Director Elaine Spalding said the organization does not make much off of the speaker series, but it has cancelled its Disney Institute, a professional development program of Disney Parks and Resorts. That was expected to be one of the chamber’s major quarterly fundraisers.

“Most not-for-profit organizations have already started to do some financial analysis,” Spalding said, adding the organization would need to take a hard look at its expenses like all others dealing with economic shutdowns.

Muddy Sneakers, a nonprofit that works with local schools and guides classes through outdoor science field trips, had to postpone a Mountainfilm on Tour fundraiser in March. And because of school closures, it has stopped all of its in-person programming.

Elise Tellez, the nonprofit’s Piedmont field office director, said all of the education staff, both part time and salaried, have been furloughed so they can draw unemployment while Muddy Sneakers can not keep them on staff.

“In some cases, we’re paying schools back for all the expeditions that ended up not happening” Tellez said.

Even though the costs to schools are a small amount of what it costs the organization, she said the nonprofit is not receiving expected income.

“It’s putting us in a situation to evaluate what it’s going to look like next year,” Tellez said. “We hope that we don’t lose any staff in the meantime, but we recognize that is an unfortunate possibility.”

Muddy Sneakers is also trying to maintain relationships with schools through the outbreak and create other learning resources like videos and reflection prompts to continue engaging with families.

Legion: N.C. Legion baseball and softball shut down for…