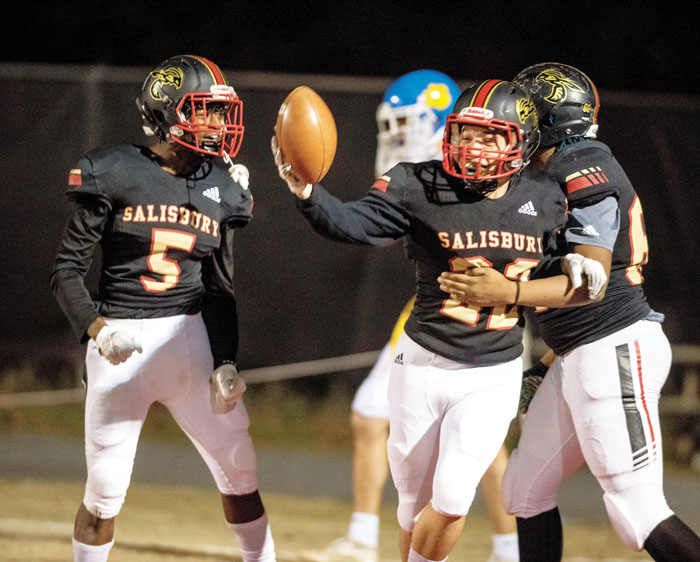 JON C. LAKEY/SALISBURY POST file photo Salisbury’s Max Morgan picked up a fumble by Mt. Pleasant and ran it back for a touchdown during a game on Nov. 15, 2019. Morgan will continue his football career at Ferrum College.

SALISBURY —  The excursion to Ferrum College may have been more terrifying than the receivers Salisbury DB Max Morgan covered in the Central Carolina Conference.

“It’s up in the mountains, middle of nowhere — the boonies, really,” Morgan said, during a break on his Monday shift at Food Lion. “Some beautiful scenery, but the drive was a bit scary.”

Morgan made two journeys to Ferrum, which is located in southwestern Virginia, between Martinsville and Roanoke. The largest annual event in the rural village of Ferrum, which has more college students than permanent residents, is the Blue Ridge Folklife Festival.

Ferrum is Latin for iron. The town got its name from iron ore deposits that were mined in the area, although Ferrum is mostly farmers now.

On Morgan’s first trip to Ferrum, things were low-key, not much hustle and bustle, but he was introduced to Jaquis McCray Jr., the newly hired DBs coach. He liked the coaches and the spacious, rambling, hilly campus.

“That visit was a good overall experience,” Morgan said.

Morgan’s second trip, an overnight stay in February, convinced him Ferrum was the right place for him to continue his football career and education. That trip included more hype and more noise.

“They took us to see the big athletic complex — the Hank Norton Center — and I really liked the positive atmosphere,” Morgan said. “On Saturday, the whole football team was going to the basketball games. Athletes in different sports supporting each other like that is great. I got a good sense of camaraderie and family from that visit.”

Morgan committed to Division III Ferrum about a week later, on March 1. His other football option was Averett, where SHS teammate Kameon Alford is headed. Ferrum was in USA South for years, but made a recent move to the Old Dominion Athletic Conference, where it now competes with Guilford and a pile of Virginia schools —  Bridgewater, Randolph-Macon, Emory & Henry, Washington & Lee, Shenandoah, Southern Virginia and Hampden-Sydney.

“I’m glad I was able to get everything settled before everything got shut down because of the virus,” Morgan said.

Morgan’s mother (Tangela) is a guidance counselor at Salisbury High, a Wake Forest graduate with a masters from Liberty, so there’s never been any doubt that the gregarious Morgan would attend college.

“When I was a sophomore and got called up to the varsity for the football playoffs, that’s when I got it in my head that maybe I also could play college football,” Morgan said. “I set my sights kind of low with D-III schools. I started looking at options. I filled out questionnaires. One of those schools I started looking at was Ferrum.”

Ferrum was a junior college powerhouse back in the day, winning four national championships. It made the transition to a four-year D-III school in the mid-1980s.

Morgan remembers Ferrum contacted him for the first time while he was playing in a church league basketball game with football teammates. He missed that first call, but he called back.

“They said they liked my film and wanted me to visit,” Morgan said.

Like everyone on a Salisbury defensive unit that keyed a 13-3 season, three playoff road wins and a trip to the 2AA state championship game, Morgan (5-10, 170)  turned in a vibrant senior season.

“He was showing flashes in spots when he was a junior,” Salisbury head coach Brian Hinson said. “He was more consistent and did a whole lot of good things for us as a senior. He was a big communicator in the back of our defense. He helped us win, and he can do the same thing for Ferrum.”

Morgan produced a huge third-round playoff game against Hertford County’s tall, talented receivers. He scored a defensive touchdown when he scooped a fumble in the first round of the playoffs against Mount Pleasant.

“I don’t think we could’ve been any better than we were my senior year,” Morgan said. “We were a brotherhood and became the team we always knew we could be.”

Morgan won the 400 meters in Salisbury’s only track meet before the season was shut down.

His career goal is to become a sports chiropractor. He plans a health services major at Ferrum, with a minor in business.