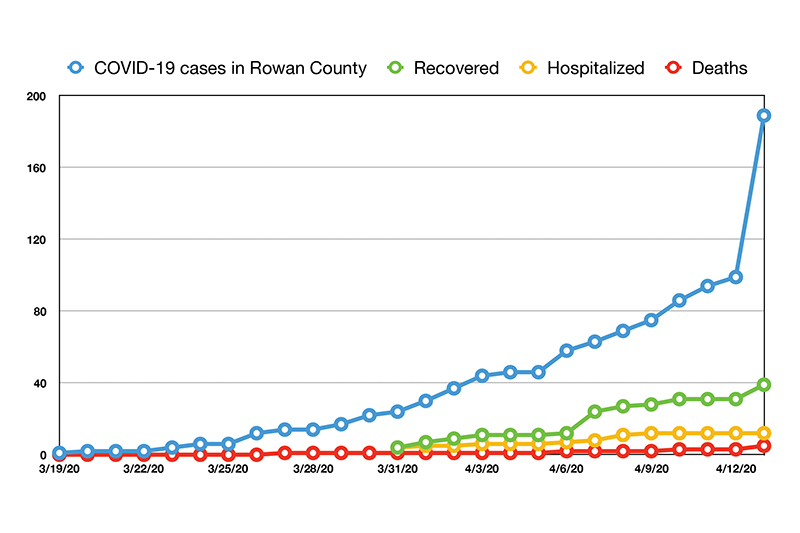 Those announcements were in addition to two new deaths from the virus locally — information about which has not been disclosed, including whether they were at risk because of age or underlying health conditions.

A spokeswoman for PruittHealth, the company that manages the Salisbury-based veterans home, said its seven positive patients have been isolated to one unit of the building and are being monitored and treated by designated staff. The facility is one of two nursing homes in the county that have seen an outbreak of more than two cases, with the other being The Citadel on Julian Road.

The Citadel’s ownership group Accordius Health has not released information about cases since disputing the existence of an outbreak at its facility last week.

The N.C. State Veterans Home is located on the campus of the Hefner VA Medical Center. PruittHealth officials said they tested 71 veterans at the facility for COVID-19 on Friday; two patients tested positive. The rest were found to be negative. PruittHealth also said all employees at the location will be tested for a COVID-19. Test kits are expected to arrive no later than Tuesday.

The escalation in positive cases at the N.C. State Veterans Home comes at the same time that the community at large is seeing a spike in cases, according to the N.C. Department of Health and Human Services and Rowan County Health Department.

Monday evening, the county said the number of positive cases here was 189 rather than the state’s 204.

“The most accurate numbers will be reported by Rowan,” Oliver told a group of community leaders during a Monday morning conference call.

In an interview with the Salisbury Post later in the day, Oliver said cases had increased so significantly because of a facility that had an outbreak, though she would not specify which one. However, she did say there were no new outbreaks at congregate living facilities such as nursing homes, jails or prisons.

“It’s really difficult to control an outbreak in places like this because of the close living quarters,” Oliver said.

Oliver said the health department sends its tests to the state lab, and any facility such as a nursing home or prison that has an outbreak is given priority. Local tests at the unspecified congregate living facility were submitted to the state on Saturday, and Rowan County received the results Sunday.

When asked why the results were not publicized on Sunday, Oliver said the health department nurses had to confirm whether or not the patients were Rowan County residents. Easter Sunday also delayed the release of results.

To date in Rowan, there are 1,362 negative cases from 1,551 total tests, and a total of five deaths. Officials said 12 people are currently hospitalized and 39 individuals have recovered. Officials continue to follow-up with 133 people. The average age of those who had tested positive by Monday was 61.4 — a major increase after it previously hovered around 49 and 50.

According to NCDHHS, there were a total of 4,816 lab-confirmed positive cases in North Carolina, 86 deaths, with 63,388 completed tests. There are 313 people currently hospitalized. These numbers are based on reports from 92 counties.