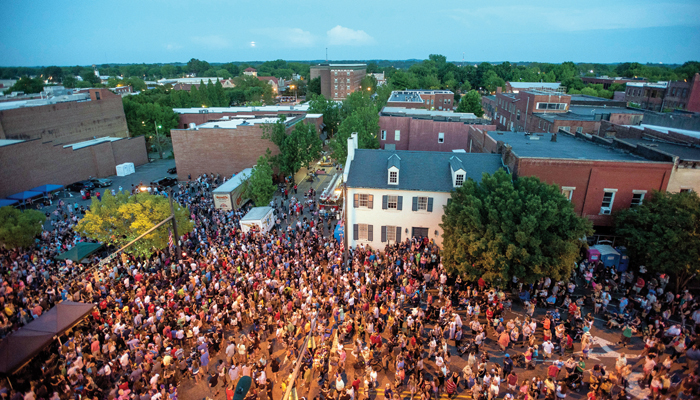 The crowds ebbed and flowed all day on May 20, 2019 during the third Cheerwine Festival. The final band of the day, Smash Mouth, drew a large crowd for the free outdoor concert on North Main Street. Jon C. Lakey/Salisbury Post

It’s time to make the call.

Organizers of the Cheerwine Festival, scheduled for mid-May, must postpone it until later in the year because of the uncertainty about how long the COVID-19 outbreak will last. Even if numbers of new cases are declining by mid-May, continuing with a festival that has attracted tens of thousands in the past could produce an avoidable spike in cases.

Social distancing has been the modus operandi during the COVID-19 outbreak, with people wearing masks in instances where they cannot put 6 feet or more between themselves and strangers in public places. At an event like the Cheerwine Festival, social distancing seems close to impossible; wearing facemasks and taking steps toward increased cleanliness is unlikely to totally prevent a spike in cases, especially considering that 100% of attendees wouldn’t follow suggestions.

What’s more, it seems probable that enough people and performers would avoid attending because of lingering worries about the coronavirus that it wouldn’t be worthwhile to continue as planned.

The festival has been among the best annual events Salisbury and Rowan County host every year. It deserves to keep that title and move to a later date — when city and Cheerwine staff can dedicate their full attention to putting on another first-rate festival.

At present, about one month out from the festival, cases are increasing at their sharpest rate yet. The county reported an increase of 90 cases on Monday alone. In late March, when Cheerwine Festival organizers said the event was still on, there were fewer than 10 cases in the county and cases had not spiked yet across the state. The governor had not yet implemented his stay-at-home order.

Now, there have been two significant nursing home outbreaks here. And there are too many complaints that government leadership and managers in the private sector have not been as transparent as the moment requires as well as that the general public has not taken COVID-19 as seriously as it should. Postponing the festival would help reduce any beliefs that it is, in fact, OK to gather in large groups.

Projections that show North Carolina staying below its hospital bed capacity require full social distancing through the end of May. And projections are just that. They decreased when the state began to take social distancing more seriously. They would reverse if an event like the Cheerwine Festival continued, drawing attendees from across the state who are eager to return to normal.

The city of Salisbury has been using its pulpit to preach the important message of staying at home to save lives. As a primary organizer of the event, the city should extend its stay-at-home message to the Cheerwine Festival and delay it until crowds can gather in large numbers.