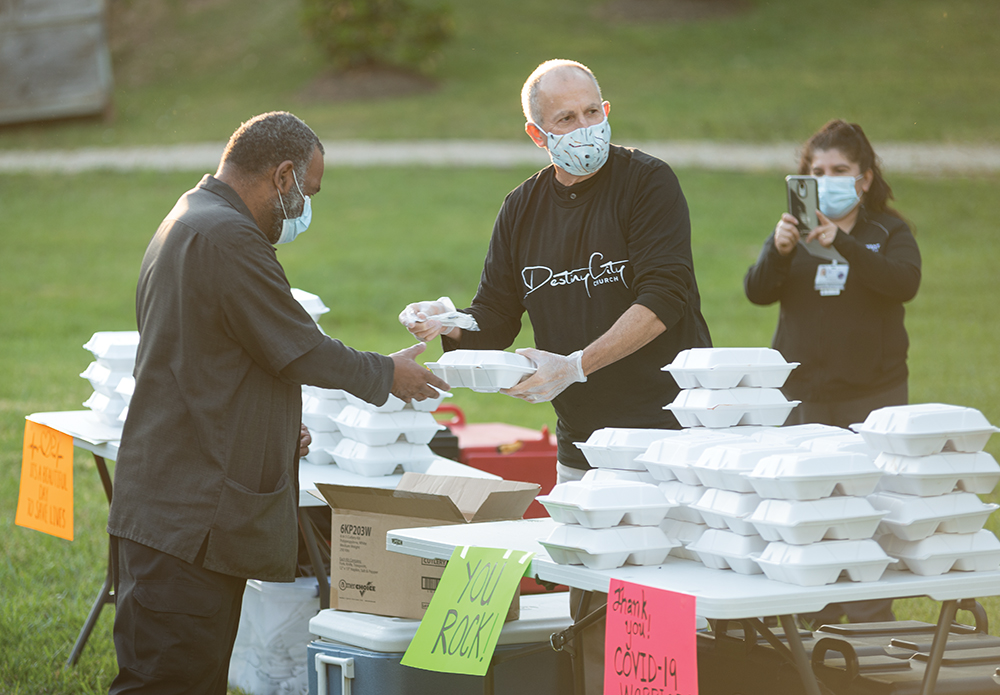 Laurels to our heroes, the health care workers who are living in an uncertain world with outcomes that are not yet clear.

Whether they work at a nursing home or inside of a hospital, nurses, technicians and workers of all types are facing a more stress-filled environment than they’ve ever experienced. Protective equipment remains in short supply and they’re being asked to do things that training has taught them could raise the risk of infection, including reusing masks or wearing them for longer periods of time than recommended. That’s all while a rapidly spreading virus is accelerating in our community.

That’s why it’s particularly important that community organizations, churches and people of all stripes continue to do whatever is possible to show their appreciation. For The Refuge Church and Destiny City Church on Friday, that was providing free meals and drinks, offering cheers as shift change happened and writing kind messages in chalk on the sidewalk around the hospital.

For firefighters and police, it was a parade of lights and sirens.

As COVID-19 accelerates in Rowan County, we hope groups who are able will do their part to thank hospital workers and that Rowan Medical Center administration will work with interested groups to make gestures of appreciation happen.

Laurel to grocery stores that have taken steps in recent weeks that include encouraging people to stand 6 feet from one another and protecting their cashiers by installing plastic barriers.

Grocery stores remain one of the few places where more than 50, likely more than 100, people can easily gather in the same building. Those people are not as close to one another as they might be at a pre-planned event, but shoppers are regularly within 6 feet of one another and too many are still not wearing masks when they shop, which the Centers for Disease Control and Prevention is recommending.

Gov. Roy Cooper on Thursday announced an executive order that says stores cannot exceed 20 percent of their fire capacity or five people for every 1,000 square feet. They must also have 6-foot markings at checkouts, have shopping hours for seniors and at-risk people, have hand sanitizer accessible for shoppers and clean and disinfect frequently.

Stores like Food Lion and Harris Teeter had already begun to take those steps days or weeks ago. And at Walmart, where hundreds of people gather at once, there’s now one way in and one way out.

By taking steps before the governor required it, those stores showed they were interested in slowing the spread of the virus before it was mandatory at 5 p.m. on Monday.