Drive-in services working out for some area churches 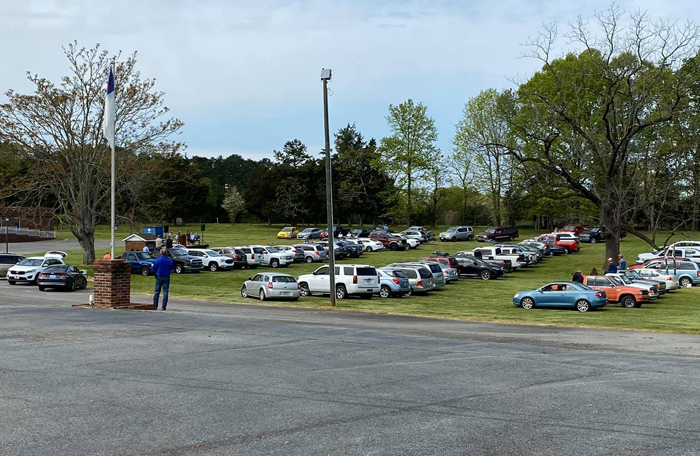 Bible Missionary Baptist Church is one of the local churches using a drive-in service for Sunday worship instead of streaming it online. Submitted photo

The coronavirus outbreak has changed the way places of worship conduct in-person fellowship nationwide, which has led some local pastors to get creative by opening up their parking lots and fields to drive-in church services. That’s because on March 30 Gov. Roy Cooper issued a 30-day stay-at-home order and limited the number of gatherings to no more than 10 people in order to slow the spread of the coronavirus, the virus that causes COVID-19.

Zorn said he began relying heavily upon lived streaming services via Facebook, which is something the church had always done.

“What is new and different, I’m preaching to an empty building,” Zorn said.

The church gathered with essential staff — sound and camera operators.

He said he’d much rather preach to people than pews but he knew there would be 200 plus people tuning in to watch the message.

“They’ve seen so much and it’s got them scared so I give them a message of hope,” Zorn said.

Last week, he decided to move to “outdoor church.” Zorn got the idea from a pastor friend in another state who had been conducting drive-in church for a few weeks.

Some in the congregation parked, spaced apart on the church lawn. Zorn has delivered his message using speakers outside.

Easter for many Christians is one of the most-celebrated seasons, one filled with fellowship during Sunday worship experiences, and Zorn wanted to continue to give that to his congregation. Since Sunday was forecast to bring showers, Zorn decided to hold church outdoors on Saturday.

“Easter Sunday, that’s Resurrection Sunday. It’s already tough to celebrate in the midst of a pandemic,” he said.

Zorn said meeting via drive-in church gives some social interaction while also hearing the lord’s word. They don’t shake hands or hug, but some families sit on the back of pickups and others bring camp chairs and sit in front of their vehicles. Zorn said his congregation enjoys gathering in this manner. Some have called to say they would like to meet similarly after the threat of the coronavirus has ended.

Meanwhile, The Refuge Church has multiple campuses — the main campus in Kannapolis, and other campuses in Salisbury, Greensboro, Brazil and Africa. Salisbury campus co-pastor Dana Rollins said they’ve reevaluated how they reach the community by arranging opportunities to serve, including drive-thru communion and providing a meal for health care workers at Novant Health Rowan Medical Center.

Rollins said the church’s Easter services will be online, but they planned to have their congregation take part in a drive-thru communion. The church had four pastors and staff on hand who wore gloves and masks and provided communion elements, read scriptures and prayed with members.

Their Brazil church conducted the first-ever drive-thru church service in that town and sparked other churches to do the same.

Pastor James Harley — the pastor of two churches, Freedom Presbyterian Church in Statesville and Reid’s Memorial Presbyterian Church in Mooresville — has been able to bring those two together for drive-thru services. They also blow the horn as a sign of “amens.” He joked that he’s getting more “amens” now more than ever.

“The first time we did it. A lot of people came out. It was good,” he said.

Even before the coronavirus, both churches would gather together every fifth Sunday.

During the COVID-19 pandemic, Harley said, he can’t help thinking, “What the devil meant for bad, God turned this thing around.”

Harley said none of his members were against meeting in the new way.

“Everybody was like yes, we will come out and we’ll sit in the car,” Harley said.

Bates said he contacted the Rowan County Sheriff’s Office and Statesville Police Department to determine if this was considered a safe alternative to meeting indoors. Both law enforcement agencies gave their approval.

The first Sunday, Bates said, some members got out of their cars and he asked them to stay inside. Instead of shouting “amen” above the loudspeakers, they, too, honk their car horns.

He admits he has mixed feelings about meeting in person at the church because he doesn’t want to put anyone in jeopardy. To minimize contact, a parking attendant spaces the vehicles six feet apart and he keeps the service to an hour or less.

Rowan Public Health Director Nina Oliver has advised churches, some of whom have contacted the agency, not to host drive-ins because it violates Gov. Roy Coopers’ mass gathering restrictions of no more than 10 people. Under Cooper’s order, individuals are allowed to attend church.

Pastor Anthony Smith’s church Mission House, located on Statesville Boulevard, is going against the grain and has hosted church online only. Before the governor’s stay-at-home order in late March he and his wife, Toni, who is the co-pastor, decided to meet online beginning March 15.

Smith said he’d began tracking the movement of the coronavirus and following reports from the World Health Organization. When North Carolina had its first positive COVID-19 case, Smith said, it really hit him.

“We’ve got to play our part. We have people in our church who are elderly and people who have lung issues,” Smith said.

Smith said he realized quickly Mission House would have to stop meeting in person. He and his wife have been hosting church from their kitchen table. Alternatively, Smith broadcasts solo and live from the church.

“Every church has its own culture, and so the DNA of our culture is to be adaptive. For us, it’s normal to adapt to the shifts that we experience in the surrounding culture,” Smith said.

He said the church still maintains its traditions, including as observing communion and baptism. But when it comes to how they conduct church: “For us we maintain a flexibility and agility, plus we have a shared leadership structure. Ut’s easy for us to adapt.”

Smith said he’s open to shifting how they hold church online. They haven’t held a traditional worship service with music, but the church has created a space their children’s ministry — Mission Kids on Facebook live before he goes live with his Worship Rally.

In a social media post from Gov. Cooper, he thanked places of worship for holding online services and encouraging their congregations to worship at home.

“You are protecting your members and everyone in the community by making these changes,” Cooper wrote via Twitter.