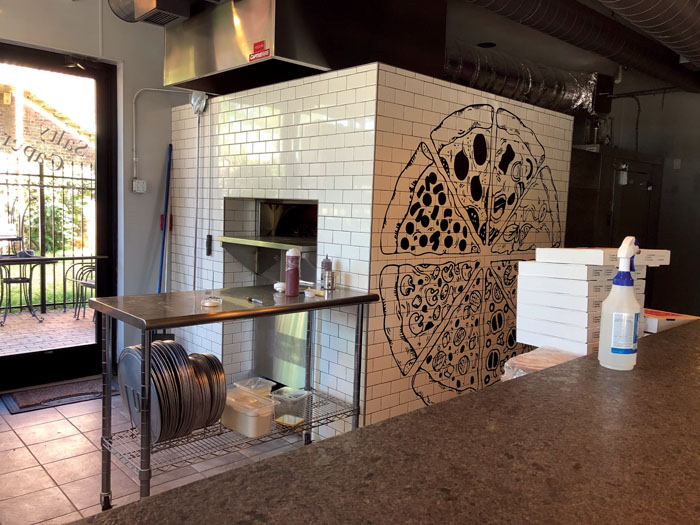 Natalie Anderson/Salisbury Post — Salty Caper reopened on April 1 after closing in February to renovate and expand its restaurant space into the next unit. A new, more efficient pizza oven is part of the new facelift, measuring about 7 feet in diameter and with a speedier cooktime.

SALISBURY — Despite the impact of COVID-19, beloved pizza joint Salty Caper was welcomed by a “super embracing” community when it reopened on April 1, said owner Gian Moscardini.

Salty Caper, located at 115 South Lee St., closed in February for renovations and reopened amidst the COVID-19 pandemic — and amidst Gov. Roy Cooper’s stay-at-home order implemented on March 30, which restricts restaurants to offering take-out and delivery services only.

And within just a few days, on April 4, so much pizza was ordered using three weeks’ worth of pizza ingredients that the restaurant was unable to serve on Monday, April 6.

“It’s almost like a blessing in disguise because everybody was so ready that our business has been pretty much the same without alcohol sales,” Moscardini said.

A new, more efficient pizza oven is part of the new facelift, as well. The new oven is about 7 feet in diameter and cooks pizza faster compared to the original oven from 2005 that was 4.5 feet in diameter. The old oven, Moscardini said, was custom-created with a top from Italy and tile from France. The new unit is pre-designed, but Moscardini assured it would still use wood.

Getting the old oven out and the new one in was a challenge, however. Moscardini said it took three days of jackhammering to destroy the oven. The new oven required the windows to be removed to get it inside.

Salty Caper is open from 4 p.m. to 9 p.m., Tuesday through Saturday. It will be closed on Sunday and Monday, but online ordering from the Salty Caper website will be available on April 14. Additionally, neither alcohol nor non-alcoholic beverages are being served at this time.

The tap walls and cabinets still remain as they were before, but additional TVs have been added above the tap wall to display a digital menu.

Salty Caper has also taken extra safety precautions to ensure “our employees and customers are very safe,” Moscardini said. Customers receive gloves, employees have been wearing face protection and the pens and pads used by customers are being sanitized before they’re put back into the rotation for use.

Moscardini said Salty Caper has sustained its full staff — with the exception of one employee who quit — and hasn’t had to make any cuts.

“This has been kind of a weird time with the coronavirus, but it’s kind of shown people how to bond,” Moscardini said, adding that the community “looks out for each other” and the virus has “made people aware of local businesses.”

An arcade in the corner of the dining room will be an additional touch once customers are able to eat inside again. And though it depends on when the pandemic is over and restrictions are lifted, Salty Caper plans to have a party for the community with live music to celebrate the re-opening.

Downtown Salisbury postpones Wine About Winter due to COVID-19 surge