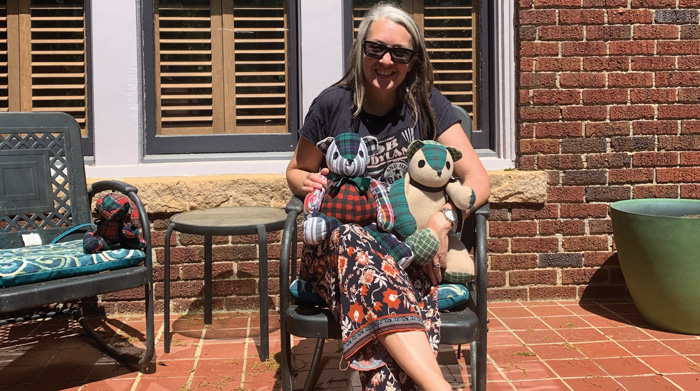 Pitner shows some of the teddy bears she has sown during quarantine.

SALISBURY — In West Square, there is a teddy bear looking at the window, and in Fulton Heights, there is a tiger looking onto the street.

Residents across Salisbury are participating in the Salisbury Bear Hunt, where people place a stuffed bear or another animal at the windows of their homes to show support of essential workers and provide an activity for kids. On Monday, the City of Salisbury called out to its residents to join the hunt as other cities have started to participate. It was inspired by Michael Rosen’s “We’re Going On A Bear Hunt” children’s book.

Mayor Karen Alexander placed a teddy bear in the window of the mayor’s office with a red shirt and a collar stating “I love Salisbury.”

Theresa Pitner began sewing stuffed animal bears when the calls for social distancing started. She sewed dozens of bears, a hobby she had when she was newly married. She gave the teddy bears as gifts. She saw a client of hers in Concord who had placed a teddy bear in the window and, later, saw posts on the website Nextdoor.

She found a home for her finished products.

In her second story window, Pitner has piled up her sewed bears and hopes others will begin placing stuffed animals in their windows.

Shelley Harper Palmer and her family have been walking or biking from Fulton Heights to Innes Street every day. Her kids started to notice homes in the West Square that had a teddy bear in the window. They decided to participate by putting a stuffed black-and-white tiger, which was the largest and newest stuffed animal, named Teasho in the window. Palmer added the tiger plays off Netflix’s popular series “Tiger King.”

The bear hunt has become a game of “I spy” for the family, even one that her 12-year-old son can enjoy.

“I hope it just gives someone a bright spot,” she said.

Palmer’s family also created a chalk mural on a fence that runs along Fulton Street. They have placed food in the little library by their home, too, something that they generally do in the summer. She said the pandemic has caused the family to slow down and enjoy their time together.

Carol Palmer, in West Square, has also placed several bears in her windows and one on her balcony — though had to remove it when it rains.

She was inspired by a post on Nextdoor and put up four bears that are her now-grown daughters’ house.

Palmer said she’s been excited to return to Nextdoor and see posts from people in different neighborhoods around Salisbury.

“It gives you reassurance that we’re all in this together,” Palmer said. “It takes our attention away from the sadder event. It’s heartwarming.”

Alexander said the bears can bring a moment of levity and is something children can enjoy.

Pitner said the bear hunt “really brings us together.”

The City of Salisbury is encouraging participants to take a photo and post it on their social media with the hashtag “#SalisburyBearHunt.”

The hunt can be modified with a paper cutout of a bear, a drawn bear or another stuffed animal.