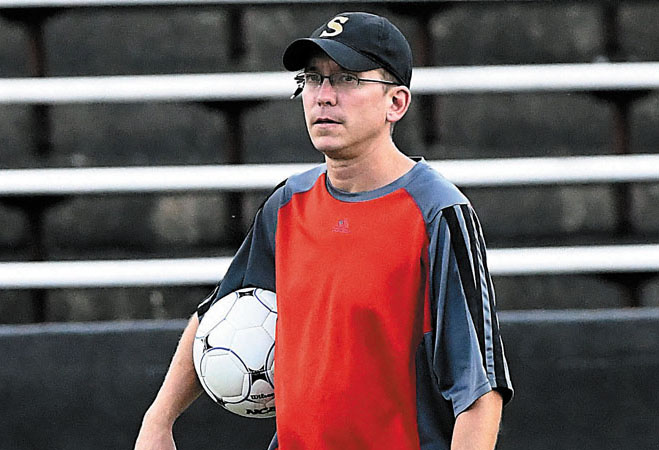 SALISBURY — Overflowing with nervous energy, Salisbury High English teacher Matt Parrish calculates that he annually paces 79 miles as he prowls the sideline as a girls and boys soccer coach.

But there’s no pacing to do now. There’s no sprinting by Parrish after balls that leave the field of play.

On the soccer front, the mid-March shutdown has been painful for Parrish. He’s guided three SHS boys teams to state titles, and he was convinced this was the best shot the Salisbury girls had ever had to make a run.

“That’s my big regret,” Parrish said. “This is a group I’ve been waiting for since a lot of them were in middle school. This season was our greatest opportunity, the best chance we’ve ever had. Our seniors knew their roles perfectly.”

Parrish said Salisbury held its own in preseason scrimmages against traditional 2A bullies Forbush and Lake Norman Charter.

“I realize they didn’t have everyone, but still we looked well enough that I was confident we were a top-tier team in 2A,” Parrish said. “And I think we had a big advantage on a lot of our competition as the season moved forward. Some schools weren’t going to have the opportunity to improve as much as we were, weren’t going to have the opportunity to be tested the way we were. In our league, we had North Davidson, Oak Grove, West Davidson, Central Davidson and South Rowan, all contenders, and all of them were going to make us better. We also had set up a battering ram of a non-conference schedule. Our non-conference schedule was nothing but conference champions and all on the road. We wanted to play those games on the road. But you know what they say about best-laid plans.”

Salisbury had a routine win against Thomasville and a mighty one at West Davidson, the team that tied for the Central Carolina Conference Championship with Salisbury in 2019. Piper Muire scored to decide a 1-0 struggle.

“We not only beat a great West Davidson team, we won on the road and we won playing a man down for much of the second half,” Parrish said. “That was a big one.”

It was Parrish’s 250th win with the Salisbury girls.

But it’s likely the last one for this season.

“I don’t have much hope right now,” Parrish said. “Honestly, I don’t. There’s no school before May 15. Graduation is May 22. I do hope they can play those basketball state championship games for closure for winter sports, but as far as spring sports, I don’t see how it’s going to work. The easiest way and the safest way is just to call it quits, and that’s the likely scenario. We’ve got four great seniors. I don’t think I’ll get to coach those girls again.”

Parrish got a text from one of his boys players, Hugo Trujillo, this week, explaining how much playing soccer for Salisbury had meant to him.

“Athletics are so important to these kids,” Parrish said. “We forget sometimes just how important, but we should never take it for granted.”

The cycle of life and nature moves on, despite COVID-19.

Some brown birds built a nest by one of the Salisbury goals. Parrish kept tabs on their progress. He informed his girls by text earlier this week that baby birds had safely hatched and were starting to make their way from the nest out into the world.

“I think within an hour 17 girls on the team had responded about the birds,” Parrish said. “It’s a very connected team.”

But now a potentially historic season is flying away.