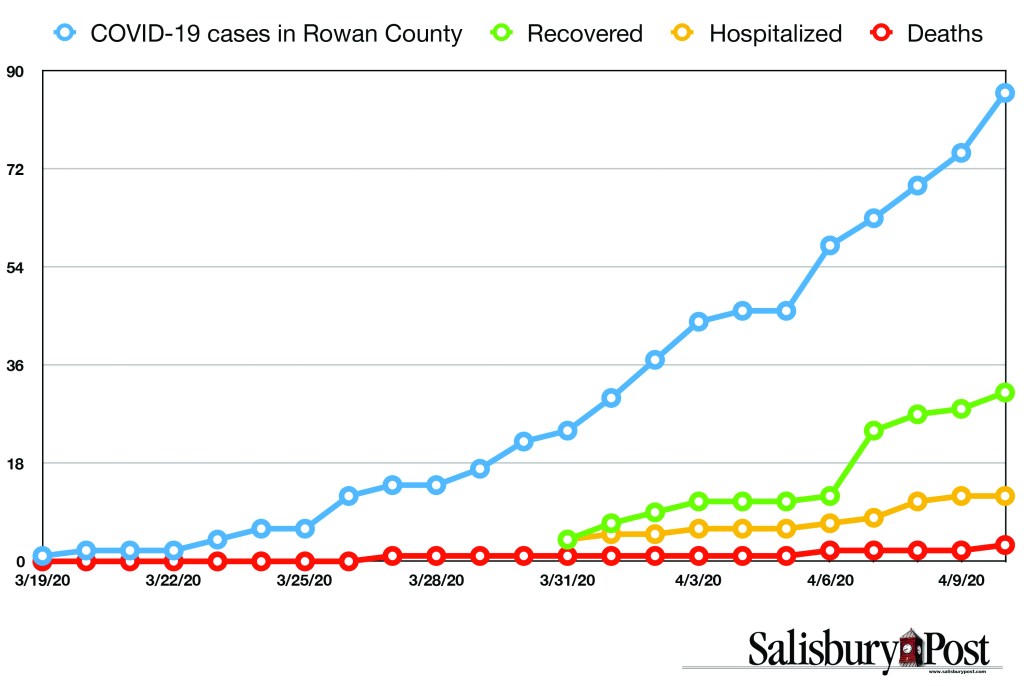 This graph shows the progression of COVID-19 cases and their outcomes in Rowan County. Since one week ago, the county has seen two deaths and nearly a doubling in the number of COVID-19 cases.

SALISBURY — In a week, two veterans staying at the N.C. State Veterans Home, located on the campus of the Hefner VA Medical Center, have died after testing positive for COVID-19, according to a spokesperson with PruittHealth.

The second veteran, whose name and age have not been released, died Friday at a local hospital. It’s unknown if the veteran had any underlying health conditions.

PruittHealth is the managing company for the N.C. State Veterans Home in Salisbury.

The first patient from PruittHealth’s facility died on April 4 and had also tested positive for COVID-19. The veteran was the second local death that occurred after a positive test for COVID-19, which is caused by coronavirus, and considered to be in the high-risk category due to age and underlying health conditions. Health officials said the veteran was already experiencing serious illness prior to his death and that the death might not be directly because of COVID-19.

Rowan County this week also doubled the number of positive COVID-19 cases, with 46 people reported a week ago and at least 94 on Saturday, according to the local health department. The State Department of Health and Human Services had a noticeably higher total for the county — 105 — on its online tracker, which keeps track of the county of residence for positive cases regardless of where they were tested. The Rowan County Department of Public Health on Saturday reported there were 1,165 negative tests, with a total of 1,259. Of those numbers, 12 people were hospitalized and 31 patients had recovered. Health officials were following up with 41 individuals on Saturday.

Rowan County Public Health officials on Saturday only reported two deaths, but a confirmation on Friday by Pruitthealth brought the count to three. The company’s confirmation also noted that at least five people in the N.C. State Veterans Home in Salisbury had tested positive for COVID-19, the disease caused by coronavirus.

The Veterans Home this week was the second nursing home in Rowan County with a COVID-19 outbreak, which was confirmed by PruittHealth’s statement as well as Public Health Director Nina Oliver.

“With any outbreak, we follow up and investigate the cases and work with the facility to try and prevent additional cases,” Oliver said.

The first nursing home outbreak was verified by Salisbury Post reporting on Thursday to be at the Citadel, a skilled nursing facility owned by Accordius Health on Julian Road. Oliver also would not speak to specifics of the outbreak at that facility.

She did say an outbreak is defined as two or more positives in a congregate setting.

However, the Post spoke with nurses at the facility who said they were aware of at least four patients who had tested positive, some of whom have been hospitalized, as well as one staff member who has worked in the facility. A statement provided by Accordius Health, contrasted sharply with the facility’s state-designated outbreak status and statements from nurses who worked there, saying there was only one “confirmed resident case” at the Salisbury facility.

Of the 91 counties reporting to NCDHHS, there have been 3,908 confirmed lab cases, 74 deaths, 57,645 completed tests, with 74 deaths and 423 currently hospitalized. The agency provides daily morning updates via its website.

During the statewide outbreak there have been questions about the care of inmates, and in response to a question posed during a Friday community leaders’ meeting Maj. Tim Wyrick said there are no current plans to do that.

Wyrick said staff isolated one inmate as a precaution. That isolation will be lifted within the next few days. Additionally, two other inmates, who were also isolated as a precaution, have since been released on bond.

“If arrestees show mild symptoms they are admitted and isolated from the rest of the population for two weeks. If they make bond during that time, they are released. If they show severe symptoms, they are taken for testing before they are allowed to come in the facility,” Wyrick said.

He added that, if an inmate tests positive, the sheriff’s office would be contacted by the Rowan Public Health Department.