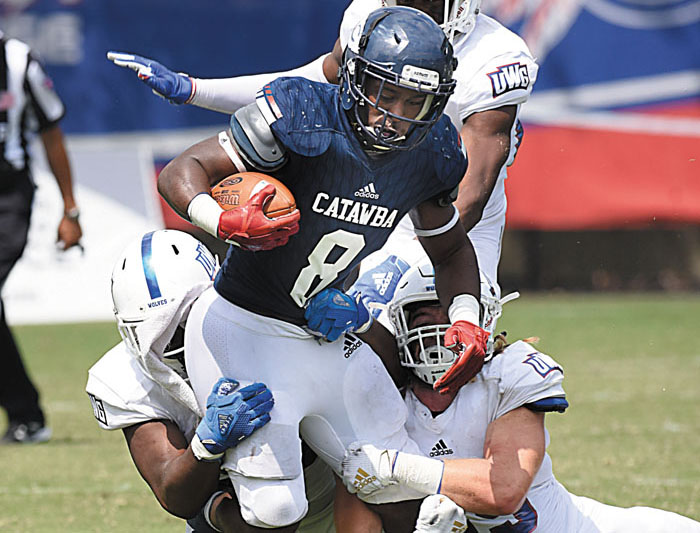 Catawba's Nasjzae Bryant runs the ball against University of West Georgia during a game last season. photo by Wayne Hinshaw, for the Salisbury Post

SALISBURY — One of the college athletic rituals of spring is football, not “games,” but workouts and scrimmages that culminate in a spring intrasquad contest with a lot of noise, a lot of interest and a decent crowd.

Catawba’s Blue-White Spring Game on Kirkland Field at Shuford Stadium would’ve taken place last Saturday, but there was only silence.

“It was going to be a full weekend, a lot more than just the football game,” Catawba head coach Curtis Walker said. “We had former players coming back from as far away as California. We had an alumni flag football game scheduled for halftime of the regular spring game. I hate it didn’t happen. We were looking forward to all of it.”

While the fall of 2019 was basically an injury-plagued, 1-10 disaster for Catawba football, as soon as the ball was snapped in 2020, the Indians were officially moving forward and putting 2019 in the rear-view mirror. Now, with some assistance from COVID-19, the struggles of 2019 will try to linger a little longer.

“We only had two days of spring practice before everything shut down,” Walker said. “We were excited about getting some key people back from injury. We had a few guys who were coming off surgeries and were not ‘full-go’ yet, but they were going to be able to participate in some of the drills.”

One person Walker was looking forward to seeing back on the field was quarterback Ken Avent III, the promising 2018 starter, who missed the entire 2019 season with an injury. Kendall Davis replaced Avent until he suffered a shoulder injury. Then true freshman Kaylon Wade had his redshirt year burned. He was calling signals at the end of a lost season. It was that kind of year, but now Catawba plans to have three seasoned QBs entering the 2020 season.

That’s assuming things are back to normal by this fall.

Walker is always optimistic. That’s part of the job, to be upbeat and positive. There are some reasons for optimism.

Catawba announced 12 talented recruits in February, on National Signing Day, or right after it.

Catawba landed six more athletes in March, who were not just typical walk-ons.

“We added some great players in March, guys that definitely are Signing-Day caliber players,” Walker said. “They were just players who took a more deliberate approach, made more visits, some of them to D-I schools, and made an informed decision, along with their families, to come to Catawba. They didn’t feel like they had to sign on Signing Day. They wanted to make sure they had the right fit.”

The challenge for Walker and his staff now is that some of the avenues they normally take advantage of in recruiting aren’t available.

Due to COVID-19 concerns, college recruiting is in a “dead period” that has been extended to May 31.

“That means we can’t bring people in for workouts and we can’t host anyone,” Walker said. “We can’t sign anyone to a National Letter of Intent.”

Catawba can still connect and communicate with potential recruits, via emails and texts, but there’s no face-to-face contact.

“We like to bring in 45 to 60 athletes per year, and we’re at 18 recruits right now,” Walker said. ” We’re all looking forward to the day when we can get back to normal business. When we can bring kids on to our campus, when they can see who we are, we can show them that Catawba is a place they’ll be happy for four years and get a degree. But right now, we’re taking a lump as far as our numbers.”

Catawba coaches are also putting in some work on the class of 2021, identifying prospects and reaching out to some of them.

Very close to home there’s been plenty of great news for Walker, His son, Jalon, a 16-year-old sophomore linebacker at Salisbury High, is a major prospect with great grades and is collecting lots of Division I offers already.

Catawba’s 2020 schedule is friendlier than it has been. The Indians won’t start with West Georgia this time.

The season is scheduled to start at Erskine on Sept. 5. The first home game is scheduled against Barton (and head coach Chip Hester) on Sept. 12.

Erskine and Barton practiced in 2019, but those long-dormant programs basically will be making on-field debuts in 2020.