Local hospitality, lodging sector loses more than half of its workforce 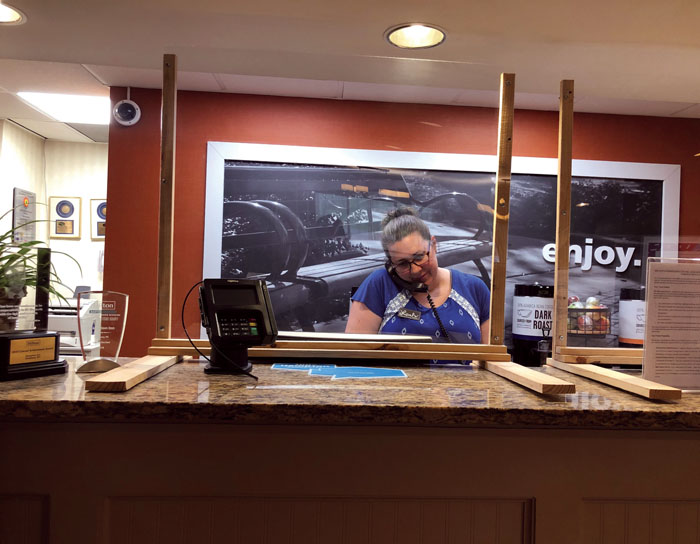 Natalie Anderson/Salisbury Post — Hampton Inn of Salisbury, located at 1001 Klumac Rd., has put up transparent barriers as an extra precaution amidst the COVID-19 outbreak. The coffee pots have also been moved behind the front counter in the lobby, behind where guest services manager Leah Hamm is working.

SALISBURY — The hospitality sector was booming in Rowan County just months ago, but has seen a majority of its jobs lost because of the impact of COVID-19.

The hospitality sector includes lodging, tourism and service-oriented businesses and has taken a massive hit due to the COVID-19 pandemic, which is caused by coronavirus. Meacham estimates between two-thirds to 75% of labor has been lost — meaning workers have been furloughed or released — within the local lodging sector due to the COVID-19 pandemic. An average of at least 2,000 people worked in that sector locally prior to the pandemic.

Hotels are still seeing some traffic, however. Meacham said traffic from construction workers has contributed to the overnight business, and hotels have seen an uptick in demand for “self-related” lodging for doctors and other health care workers who wish to stay there as they travel. Additionally, since truckers are considered essential workers, local hotels have seen their business, too.

Krista Osterweil, who serves as the general manager of Hampton Inn of Salisbury, located at 1001 Klumac Rd., said the hotel has had to furlough 75% of its team, which initially included 30 employees. Additionally, the hotel has suspended its food service and added transparent barriers between customers and front desk workers as an extra precaution.

A concern Osterweil has from listening to others is that some people may not be taking Gov. Roy Cooper’s stay-at-home order seriously.

“As a person who is managing a business being directly impacted, I would hope everyone would stay home so we can get back to business as usual,” she said.

And since hotel rates fluctuate based on supply and demand, Osterweil is having to offer lower rates to adjust to the lower demand. Hampton Inn is also offering lower rates to health care organizations looking to house traveling doctors and nurses.

Since the tourism authority can’t market travel during this time, it has worked with the Rowan County Chamber of Commerce and Rowan County Economic Development Commission to provide displaced workers with resources, including unemployment benefits and financial relief with Small Business Administration loans.

The three entities compiled a list of resources for locals impacted by COVID-19 that can be found at visitsalisburync.com/resources. Since its compilation, Meacham said the site has seen 8,000 unique visitors. And most of the clicks have been for available jobs, unemployment information and financial relief options with the SBA.

After the pandemic, however, the focus of the tourism authority will be to re-incentivize business and corporate travel to come back to the area.

However, hotels are not the only businesses in the lodging sector taking a hit.

Andrew Walker, who owns Across the Pond Bed and Breakfast at 324 N. Fulton St., said he hosted his last guest on March 16. Since then, he hasn’t hosted any others.

He’s issued refunds to guests who have canceled their stay. Some have postponed for a later date. And since the spring and fall seasons are busiest for the bed and breakfast, Walker estimates a loss of $5,000 per month. In April, for example, he would normally have guests for 20 days of the month, and he could often fill all three of the rental rooms.

But while “lots of people are in worse situations than we are,” Walker said, his concern is that small businesses might run out of cash and have to shut down their business. His bed and breakfast rental home is also the home he lives in, and things will be “real serious” if the virus continues for another three or four months.

“The problem for a small business (is) once they get closed down, how do they ever get started back again,” Walker said.

Walker said he and his wife have applied for an SBA loan, and the couple is hopeful they’ll qualify.

Rob Romero, owner of the Carolina County Campground, located at 185 Jim Neely Drive, said he’s usually full on weekends this time of year. And on Easter weekend, the camp sites are usually sold out. But now, he’s hosting only one or two campers.

Additionally, Romero said all guests have canceled their reservations for the campground until Memorial Day, causing him to refund $2,300. That lost revenue doesn’t include the loss of customers who come to the campground without a reservation.

“It’s a business. Without money coming in, it’s tough,” he said.

At the campground, the bathhouses, office and laundry mat have been closed, meaning campers have to be “self-contained” and have bathrooms in their campers. Thus, no pop-up campers or tents are allowed at this time.

Romero, like other business owners, plans to apply for financial relief from the SBA. If he’s granted the relief, or if the pandemic has subsided by June, he “should be fine.”

Romero is offering a 50% discount to nurses and doctors who wish to stay at the campground during this time.

Meacham said some of the relief coming from the federal government should be helpful for businesses in Rowan County. He credited the coordination during this time between the health and business sectors — since “it’s both a health and economic crisis” — and for “recognizing we’re in this together.”