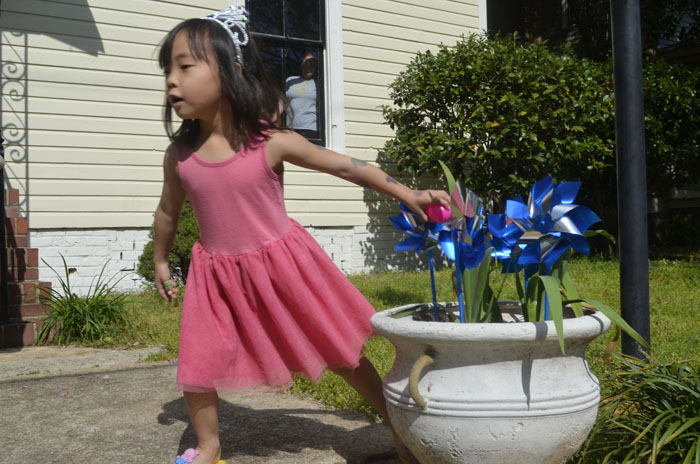 SALISBURY — Margaret Redmond excitedly placed a plastic Easter egg into her colorful pink basket. And the 4-year-old scooped up a few more eggs during an egg hunt in her front yard.

The Easter egg hunt was the brainchild of First United Methodist Church’s youth ministry. The church has always held an Easter egg hunt for its children, but because of the mass gathering restrictions due to the COVID-19 pandemic they came up with a creative way “to bring Easter to them.”

“I think it’s so important for people to remember that right now, even though we might not be able to meet in person for church, we can still be the church and spread the love of Jesus,” Weisensel said.

And Weisensel said they wanted specifically to find a way to meet the needs of the youth. She said the church took extra precautions, including wiping down packages, using hand sanitizer and gloves as well as washing their hands.

Each child received six eggs filled with candy as well as an Easter and holy week devotional.

The church began their at-home Easter egg hunts on Tuesday and will continue through today.

“It’s a great outreach to the families,” Weisensel said.

Alissa Redmond said she told her daughter, Margaret, about the treat 20 minutes before Weisensel arrived to hide the eggs. Margaret planned to wear a special outfit for the hunt, which included a tiara, pink dress and bringing her bunny rabbit stuffed animal, Redmond said.

Redmond said she’s struggled to figure out how to still make Easter special for Margaret.

“It’s so sweet,” she said about the idea.

The family was in Bolivia late last year because Redmond was working for the state department and they missed Halloween, she said.

Margaret also has a birthday in July, and Redmond said she had concerns that plans will be put on hold.

Margaret, who was adopted three years ago from Hong Kong, ran back inside to retrieve her stuffed animal, her first present after adoption.

When asked what her favorite candy was, Margaret pulled out a mini Kit-Kat.

In another family, Raleigh, 9, excitedly ran outdoors to hunt for Easter eggs as his older brother, Nate, 15, fell behind him.

Their mother, Laura Shaffer, said it was sad that they were not going to be able to attend their traditional Easter egg hunt, but the personalized Easter egg hunt was a welcome distraction.

Shaffer is also a volunteer at the church. Nate said the hunt was a nice change because he only got to help hide the eggs in the past. This year, he got some candy of his own.