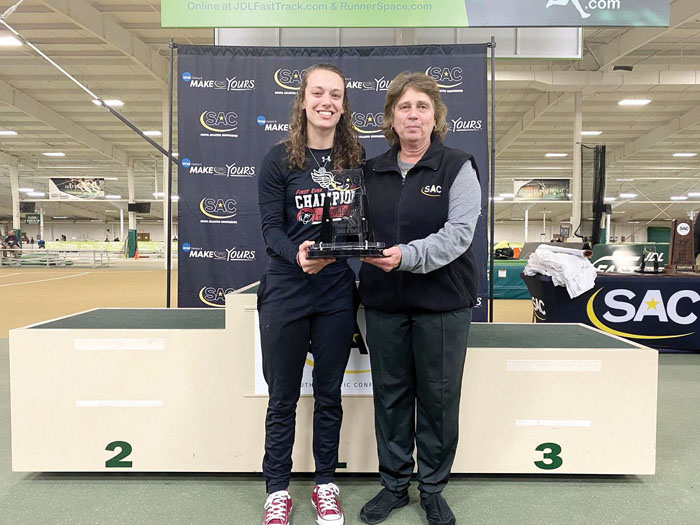 Jocelyn Lowe receives the Elite 20 award from a SAC representative.

Biomechanics and kinesiology sounds like an even rougher class, a class that could make an average student consider changing majors.

Concepts of physics, well, that’s a class that’s been messing up the lives of college students and had them running down hallways screaming for decades.

But for East Rowan graduate and Lenoir-Rhyne University senior Jocelyn Lowe, none of that academic stuff has presented much of a problem. She’s a 4.0 student  — straight A’s —  in health and exercise science.

“It’s in my major, but exercise physiology probably was the toughest class I’ve taken,” Lowe said. “It’s the study of how a body heals during exercise. It was pretty technical, but it was also pretty interesting.”

What’s interesting about Lowe is that she’s maintained that 4.0 GPA despite the time demands of competing as a winter and spring track and field athlete.

She was honored as the 2020 Elite 20 Award winner for South Atlantic Conference women’s indoor track and field on March 1, following L-R’s second-place finish in the SAC Championships. That “Elite 20” award honors the student-athlete with the top cumulative GPA in each of the league’s 20 team championship sports.

She didn’t win, but Lowe also was a candidate for the SAC’s Elite 20 award for the 2019 outdoor track season. She was recognized as Lenoir-Rhyne’s top female scholar-athlete for all sports.

“Our faculty always has been awesome, really understanding about the different schedule you have as an athlete,” Lowe said. “Sometimes it’s been challenging to maintain high grades, but I’ve always been dedicated to doing the work and I’ve always made school work a high priority.”

Lowe admits that if she’s got a problem, it’s that she studies too hard sometimes. But that’s not the worst flaw in the world.

The 5-foot-8 Lowe is one third of a set of triplets. She was a fine athlete at East Rowan. She believed for a long time that basketball was her thing and would be her ticket to a college education. She played four years of varsity basketball as a pass-first point guard. She scored 568 points, pulled down 425 rebounds and had 350 assists.

The college recruiters never came around for basketball, but track was a different story. She was a solid triple and high jumper for the Mustangs, but she excelled even more in the throws. She lacked the size and bulk of a classic thrower, but she combined excellent technique with surprising strength and explosion.

In the 2016 Rowan County Track and Field Championships her senior year, she won the discus, placed second in the triple jump and was fourth in the high jump and shot put. That effort was good for 26 points. She was named Field Events MVP.

In the South Piedmont Conference Championships her senior year, Lowe won the discus, placed in both of her jumping events, and ran a leg on a fourth-place 4×100 relay team.

At L-R, she has focused exclusively on the throwing events, which are much different than in high school.

Lowe jokes that her L-R coach told her that it would be OK with him if she retired from the shot put, but she’s performed well in the other throws. She scored in the meets.

“It was an adjustment, learning so many new events, but I got pretty good at them,” Lowe said. “I think all throwers would prefer to throw outdoors than indoors. The hammer throw was all new to me, but it became my favorite event.”

Athletically, her shining moment came in the spring of 2019 in the South Atlantic Conference Championships. Lenoir-Rhyne’s program won its first league title. Lowe contribute to that banner with a sixth in the hammer throw, a seventh in the javelin and a ninth in the discus.

“That was special because that winning the conference was something we’d really been pushing for as a team,” Lowe said. “Queens is the big rival in track and field, the school that usually wins. It was an accomplishment to knock them off.”

L-R’s track women were honored at halftime of one of the Bears’ home football games. It was a big crowd. Lowe received a championship ring.

Lowe estimated that a third of L-R’s student body is made up of athletes.

“Athletic events have been a big part of the college experience” Lowe said. “I think my first two years at L-R we won six football games, but the last two years (12-2 and 13-1), we didn’t lose many.”

In Lowe’s last athletic competition for L-R, in the SAC Indoor Championships in February, she placed ninth in the weight throw.

L-R’s outdoor track and field season was canceled by COVID-19 concerns, so the Bears didn’t get to defend their title.

Students were sent home from Hickory. Lowe has been trying to maintain that 4.0 GPA via her online classes.

“It’s a big adjustment mentally because home was always where I came to take a break, to relax,” Lowe said. “Now home is my classroom, and I’ve got other family members here, working or studying from home. I just have to make sure I set aside a couple of hours every day for school work. You have to prioritize.”

Lowe is engaged to Logan Shuping, a college senior at East Carolina. They’ve been a couple since they were freshmen at East. COVID-19 has postponed the wedding for a while, but they hope to settle in the Piedmont, no more than an hour from their families.

Shuping is the East Carolina University golfer who was on the runner-up team at the 2019 Amateur Four-Ball Championship held last May in Oregon. Lowe made the trip to Oregon to support him. This year’s Four-Ball event was to be conducted in Philadelphia, but like a lot of things, it’s been canceled.

“We’re all looking forward to things getting back to normal,” Lowe said.

Until then, she’ll keep making A’s.