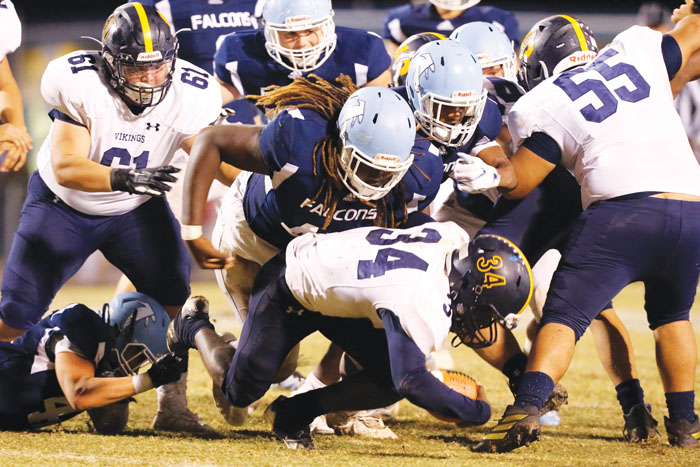 West Rowan’s Zeek Biggers (44) knocks South Iredell’s Alterek Adams (34) into the backfield during a game on Oct. 18, 2019.. James Sipes for the Salisbury Post 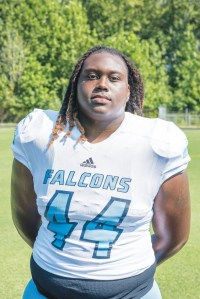 The junior comfortably carries 330 pounds on his imposing 6-foot-5 frame. Those are Biggers’ own numbers. You see just about every imaginable size listed for him — anything from 6-3 to 6-6 in height; anything from 290 to 335 on the scales.

Watch the highlight of Biggers swallowing up a Crest pass play during last year’s 3A state playoffs, and it’s pretty clear that Biggers is a mobile athlete, not just a big guy. He’s going to be a Division I football player. It’s early and you never know, but there’s a reasonable chance he could develop into an NFL player.

While he’s been used primarily as a defensive tackle for West’s Falcons, many people predict his future will be on the offensive side of the ball as a guard. He’s been used as a blocker in short-yardage and goal-line situations. West plowed for a touchdown behind him against Crest.

“It’s just really unusual for someone that athletic to be that big,” West head football coach Joe Nixon said. “He can run. He has good footwork. Zeek has lots of God-given gifts.”

COVID-19 has changed the recruiting game, has postponed or canceled visits by prospects to colleges as well as visits by college coaches to high schools.

He has offers from at least eight schools — N.C. State, Georgia Tech, East Carolina, Akron, Liberty, Georgia State, and most recently, Temple and Campbell. Liberty was the first to offer, back in the fall. There will be a lot more.

“I haven’t really tried to count up the offers or anything like that,” Biggers said. “I knew this could happen for me. I’m not surprised, but I am really happy about it.”

Biggers’ highlights for his junior football season included the nimble interception of a South Iredell screen pass that turned into a back-breaking West touchdown.

His strengths in addition to being strong are his work ethic, his ability to get off the ball quickly and his physicality.

“We’ve known for a while he had a chance to be a highly recruited athlete,”Nixon said. “He’s done a very good a job in the weight room. He’s very done a good job in the classroom as a solid 3.0 student. He’s taken care of his grades. Grades combined with size make him  recruitable. Most college coaches will ask me about a player’s academics and a player’s character before anything else.”

Even with school and gyms shut down, he still gets in regular workouts.

He’s in no hurry to commit. He has campus visits he’d like to make once things return to normal.

There’s no clear-cut favorite to land Biggers, but the programs he’s followed for years are N.C. State and North Carolina.

North Carolina isn’t on the list of schools that have officially offered at this point, but Biggers visited Chapel Hill on a “Junior Day” in February.

High school girls soccer: Things were looking up at…