Community Action Agency among those moving services to remote delivery 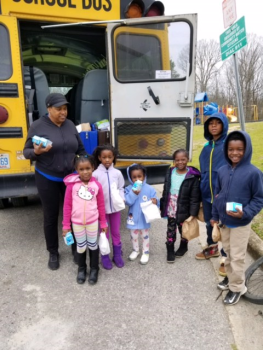 Submitted photo – Patricia Jackson with children at one of SRCAA's meal delivery locations.

SALISBURY – The Salisbury-Rowan Community Action Agency is continuing its programs remotely to serve clients in all of its programs during the COVID-19 pandemic.

The agency had a response plan for the pandemic in place on March 12 and began delivering meals to the more than 500 children it serves in Rowan and Davidson counties on March 16, two days after the Saturday order from Gov. Roy Cooper for all K-12 schools in the state to close.

The nonprofit agency was delivering meals daily until spring break, when it opted to deliver a large quantity of food at once that’s intended to last students for the entire break.

Rowan County children also have electronic learning materials on the tablets sent home with them as well take-home packets, which are usually sent home with kids but have been expanded.

“Not just the toddlers, but also our infants. The teachers are calling daily, we’re doing activities with them, talking with them over apps such as Dojo, Remind, things of that nature,” Executive Director Dione Adkins-Tate said.

The agency has been delivering more than food, too, providing diapers and baby formula for enrolled families as well.

“This is definitely an unprecedented event for us, and I’m sure many others around the nation not just our county,” Adkins-Tate said.

Adkins-Tate said the agency has a responsibility to the community, and its leadership team for the is still working. Center managers and frontline workers have been sent home but are checking in with participants and families daily.

“We’re still here. It does not stop, believe me,” Adkins-Tate said.

The agency also will be continuing its education programs into the summer — something Adkins-Tate said goes beyond the work the agency would normally take on.

The agency receives federal funding for its programs. Head Start, specifically, is a program of the U.S. Department of Health and Human Services.

“There’s always going to be a cost associated with it and that is why we are always welcoming donations,” Adkins-Tate said.

The agency is also surveying the people it works with to make sure it is providing services needed now as well as after the pandemic. In addition to child services, the agency operates a self-sufficiency program. Adkins-Tate said SRCAA takes a holistic approach to families in need.

The agency is anticipating a surge in requests for assistance when the pandemic subsides. People who need services can apply on the agency’s website at srcaa.com

“We are encouraging people to go ahead and start applying We want to make sure they are in our system so we are ready to rock and roll when all this ends,” Adkins-Tate said.

The National Head Start Association has compiled resources for parents on how to deal with the pandemic, including links to companies providing free internet access, coping with a newborn during the pandemic, how to speak to children about the virus and stress management.