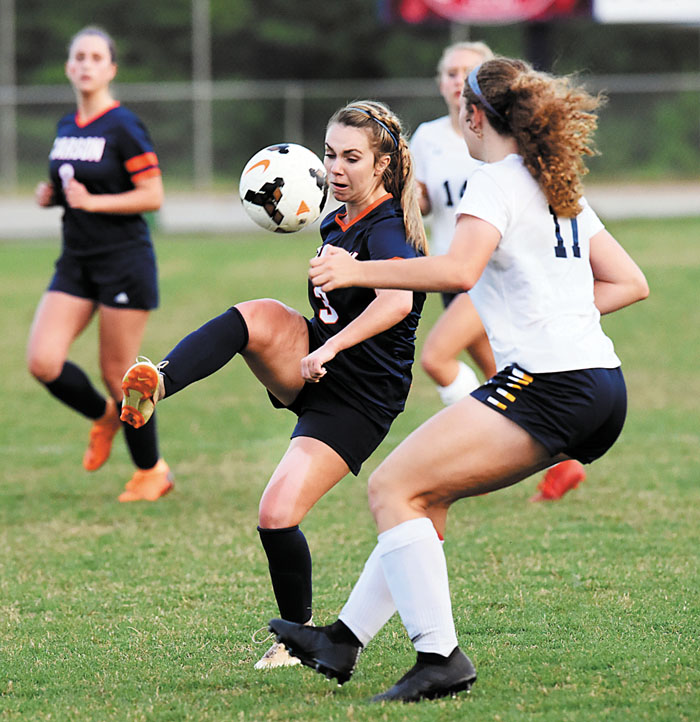 Carson's Gracie Thomason and South Iredell’s Erin Shaver during a match on April 29, 2019. Photo by Wayne Hinshaw, for the Salisbury Post

2019 playoffs: Lost to Asheville 1st round

CHINA GROVE — Carson head coach Lauren West is a history teacher, so this virus-disrupted season is going to provide instructional material for years to come.

“Everything is unprecedented,” West said. “This is history in the making, and we’re living it.”

Living it, but not necessarily loving it.

Talking about what might have been this season while she made a food pickup at Romano’s Italian Cuisine on Monday, West used the adjective “tough,” 10 times in 10 minutes to describe life without soccer.

You can’t blame her.

There was a good chance this was going to be an exceptional season for a Carson team with 10 seniors. Maybe a championship season. It was a squad that had a chance to achieve Carson’s first playoff success since 2014.

Catawba-bound senior Gracie Thomason is the leading scorer in program history with 72 goals. That’s a great person to build around.

Throw in two Conrads (Taylor and Lindsey) and three Isleys (Lani, Hannah and Riley), and the Cougars expected to be even better in 2020 than they were in 2019 when they were runner-up in the North Piedmont Conference and had an impressive 90-39 overall goal differential. In NPC matchups, Carson outscored opponents, 52-8.

The Isley sisters combined for 31 goals last season, while the Conrads were defensive anchors.

“The talk of the off-season was that it was going to be very close between us and South Iredell this year,” West said. “South Iredell has a great program and can compete with just about anyone. They did have a little bit of an upper hand when we played them last year, but we were missing key people. We had very high hopes of a conference championship this season.”

Carson received its first bad news before the season even began. Emelyn Sotelo, one of the team’s top juniors, tore an ACL playing for her club team.

West said the soccer team was just starting to mesh after adding basketball players who reached the third round in their sport.

“We only got to play three games, and I couldn’t be at one of those because I had the flu,” West said. “That’s not much of a season.”

There was disappointment in a 7-0 loss to Hickory Ridge, the eighth-ranked team in 4A, but Carson had scored 10 goals in its early wins against Davie County and A.L. Brown. Thomason, a Catawba signee, piled up six goals and three assists. Hannah Isley, Lani Isley, Sydney Borst and Kate Carter scored goals.

“Gracie Thomason was dominating, playing great,” West said. “Once she signed with Catawba, that was a huge weight off her back.”

West misses working with Carson’s experienced players, but she’s also missing practicing with the new ones. Borst, who scored 14 goals for the Cougars in 2019, has twin sisters, Hayley and Makayla, in Carson’s freshman class.

“The plan was for those two to play in jayvee games if our opponent had a jayvee team, but to play on varsity if they didn’t,” West said. “Our future looks pretty good.”

But the present looked even better. Now the present is on hold, and time is not on the side of the Class of 2020.

“It’s tough, it’s just really tough,” West said. “I know our girls are still working out. I think they’d play all summer just to have some kind of season.”