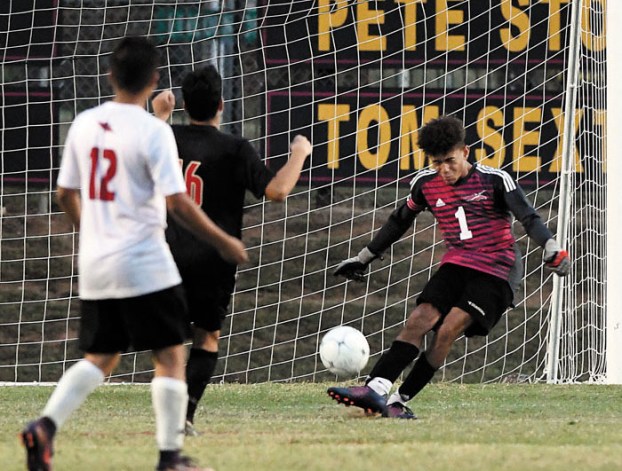 South's goalkeeper Parker Anderson kicks the ball in front of the goal during a match against Salisbury on Sept. 30, 2019. Anderson will continue his soccer career at Pfeiffer. Photo by Wayne Hinshaw, for the Salisbury Post

CHINA GROVE — South Rowan goalkeeper Parker Anderson’s save numbers rose steadily the last three seasons — from 185 to 226 to 267, as a senior.
While the rewarding of a save simply means a ball was stopped that would’ve otherwise gone into the goal, there are different degrees of save. There are routine saves that roll politely into the gloves of keepers and there are hard ones that are blasted to their left or right. Anderson stops a lot of the hard ones.
“I realize that sometimes that save stat is just a matter of picking the ball up, but in those 200-save seasons, Parker probably saved 40 or 50 strong shots that would’ve been goals,” South coach Russ Fisher said. “I thought he was the best at his position in Rowan County and the best in a good conference (the 2A Central Carolina).
Saves are the most obvious part of the goalkeeper’s job, but they’re just part of it. He also has to be a communicator, directing the defense. He’s also frequently a passer, initiating the offense.
Anderson’s proficiency at those things has earned him a spot on the Pfeiffer University team next fall.
“That all happened recently,” Anderson said. “I was thinking I would probably be going to a school in Virginia, but then one of South’s former coaches told me Pfeiffer was looking for a goalkeeper. I contacted them, they looked into it, and they surprised me by making an offer. It happened unexpectedly, but life can take unexpected turns.”
Anderson moved from the mountain town of Marion to China Grove when he was in seventh grade. He’d always liked soccer, but he was an offensive-minded midfielder. One day in eighth grade at China Grove Middle School, he was asked to play between the pipes — and he found his true calling.
“It was all more of an accident than a plan,” Anderson said. “But it was really a break for me. I’ve been able to accomplish more as a goalkeeper than I ever would’ve been able to do as a field player.”
Anderson’s freshman season at South, the starting goalkeeper was senior Cameron Corriher.
“I worked with Cam every day, and we took shots at each other,” Anderson said. “I learned a lot.”
Anderson has been the starter for the Raiders since his sophomore year. He’s steadily gotten better.
“I think my strengths are being able to make good decisions under pressure and my work ethic,” Anderson said. “I do work at it. I try to keep a ball on my foot. A lot of the time when I’m home, I’m watching something that’s going to make me a better soccer player.”
Anderson is not tall (5-foot-9) or big (145 pounds), but he compensates with mobility.
“From the center of the box to the top corner, he’s explosive,” Fisher said. “He’s not as tall as most keepers, but he still jumps higher than most.”
A lot of Anderson’s saves last fall weren’t of the smother-it or catch-it variety. They were soaring saves, punching it wide or knocking it over the cross bar.
With Anderson’s goal-prevention playing a major role, South made strides, improving from 6-14-3 overall to 13-9 and improving the CCC win total from four to nine.
“He saved so many goals and kept us in so many games,” Fisher said. “He just never stops working at soccer. There were Saturdays where I opened the gate for him and someone (usually teammates Harrison Ward or Eber Tapia) took shots at him for a few hours.”
Anderson posted a season-high 19 saves in a 2-0 loss to West Davidson. He had 13 saves when South won against Salisbury and 11 when the Raiders lost to the Hornets in overtime in the rematch.
But he felt like his best game and the team’s best game came in the 1-0 loss to Surry Central in the first round of the 2A state playoffs. It was the first playoff match for the Raiders since 1993.
South players struck the cross bar five times with near misses, while Surry Central’s lone goal was flukey. It was tough loss, but a good experience.
“There were a lot of nerves because we hadn’t been in the playoffs, but once we settled down it probably was our best effort of the season,” Anderson said. “Being in a playoff game was an experience that is really going to help our returning guys.”
One of those returners will be Noah Steedley, a sophomore goalkeeper who has been learning from Anderson in the same manner that Anderson was tutored by Corriher.
“He used to be really quiet.” Anderson said. “Now he’s communicating a lot better.”
Anderson works at Food Lion in China Grove. He says things are “extra-crazy” there due to COVID-19 concerns.
Some day Anderson may be a guy who discovers vaccines for diseases.
“Biology always has been my favorite subject,” Anderson said. “That’s what I want to study at Pfeiffer. Not to go into the medical field, but with the idea of being a research scientist.”
You Might Like