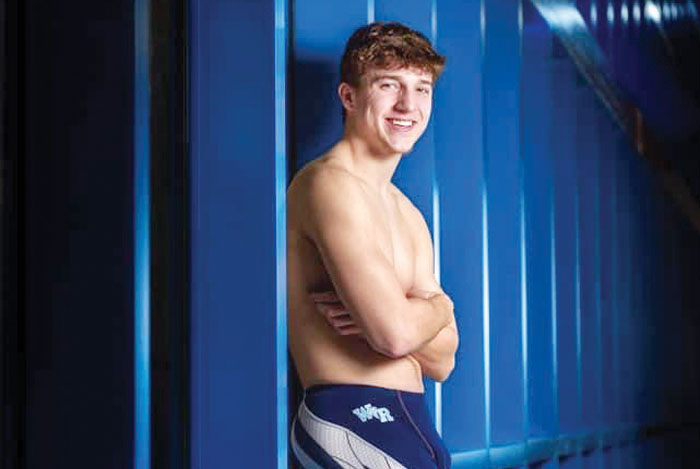 Max Blackledge was a standout swimmer at West Rowan.

MOUNT ULLA — West Rowan senior Max Blackledge may be only 17, but he’s already figured out what’s most important.

It’s why he’s one of the 35 student-athletes that the North Carolina High School Athletic Association is honoring with “Heart of a Champion” recognition.

“This award super-surprised me, just totally unexpected,” Blackledge said. “It really means a lot. I realized a few years ago I couldn’t be that star athlete. But I always tried to be that guy that lifted everyone else on my team up.”

Some of the athletes who receive “Heart of a Champion” awards are the same ones who provided the home runs, dunks and touchdowns, but most of these champions are being recognized for more subtle virtues such as character, selflessness, sportsmanship and citizenship.

But high school football is tougher. Guys get bigger, stronger and faster, and there’s a lot more competition. Blackledge’s last touchdown came as a member of West’s jayvee team.

He caught only a handful of passes as a senior receiver. Mostly, he blocked. He did his job on special teams — on the hands team as well as the standard kickoff return team.

“The most memorable moment for me as an individual was a game (Crest) when we had Jalen Houston, Quay Weeks and Reggie Everhart deep, and the guys on the row in front of them were Baiden Suddarth, Daniel Sell and me,” Blackledge said. “We were in there to block, but they didn’t want to kick it to our fast guys, so they kept kicking it to me. I had four kickoff returns.”

Blackwell wore the No. 13 jersey, but he considered it good luck to contribute to solid teams that never lost to a county opponent.

“What I’ll remember most is that West football really was a family,” Blackledge said. “We all got along. On a lot of teams, you have groups, but we didn’t. When we practiced, everyone wanted everyone else to get better. When we played, everyone just wanted to win. We played a tough non-conference schedule, but we gave it our best every game.”

Most of Blackledge’s individual success for the Falcons came in the water. He was the standout on West’s swim team. That was ironic because he had no intention of swimming when he started high school.

“I got cut from basketball tryouts as a freshman, and that’s why I decided to join the swim team,” Blackledge said. “I never swam for a club team or anything like that, but my parents always wanted us to be active in the summer months, so I practically grew up in a pool. It worked out for the best. I loved being part of the swim team.”

In the Rowan County Championships in January, Blackledge placed second in the 50 freestyle, which placed him on the all-county team. He was fourth in the 100 backstroke. He helped the Falcons accumulate more points by swimming on the third-place 200 freestyle relay team and the fourth-place 200 medley relay team. That was a good day’s work at the Hurley YMCA.

Max’s sister, freshman Anna Grace Blackledge, was one of the better swimmers for West’s girls.

Blackledge played baseball in the spring at West as a freshman and sophomore. He had a decent sophomore season for the varsity squad, drove in two runs in one game and scored three in another, but he switched to golf his junior year. He wasn’t Tiger Woods, but he was respectable. He shot 97 in the regional and usually was the fourth scorer for the Falcons.

“The crazy thing was we didn’t even get to play a golf match this spring,” Blackledge said. “Our first match was scheduled for the 16th of March, and everything closed down right before that.”

He was always involved in a sport, so he was never a joiner of clubs. He did enjoy helping out with Special Olympics, but even that project is on hold right now because of COVID-19 concerns.

Guys like Blackledge don’t stay shut down long, though.

He’s looking forward to intramurals at Appalachian State University, where he plans to major in business communications.

“That’s the family school,” he said. “My parents met there and my uncle went there. It was the only place I ever considered.”