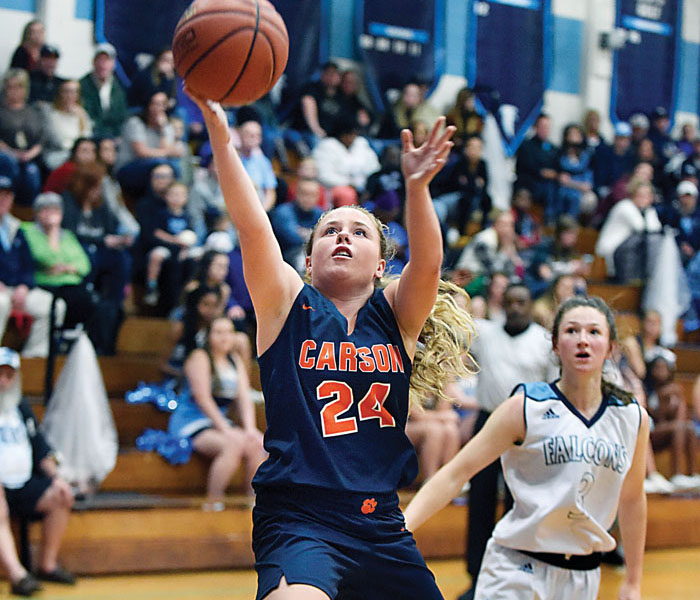 Carson's Maci Cooper excelled in four sports in her high school career. Here, she is seen during a basketball game against West Rowan on Jan. 25, 2019. West’s Mary Sobataka looks on. Photo by Wayne Hinshaw, for the Salisbury Post

CHINA GROVE — Carson’s 5-foot senior Maci Cooper tried not to short-change any of the four sports teams she played on.

She put in such a towering career in basketball, softball, tennis and track and field, that she’s one of the 35 student-athletes that the North Carolina High School Athletic Association is honoring with “Heart of a Champion” recognition.

“I tried to work as hard as I could for four years, and it paid off,” Cooper said. “This award means a lot.”

At the center of the “Heart of a Champion” awards are character, sportsmanship and citizenship. Cooper always provided those things, in addition to some serious ability.

“To know Maci is to love her,” Carson head basketball coach Brooke Stouder said. “She does a lot of sports, and she’s really good at all of them, but she’s an even better person than she is an athlete. She’s driven, but she’s also funny. She’s kind-hearted.”

Cooper played varsity tennis for four seasons. She was a key member of two North Piedmont Conference championship teams, a conference runner-up and a third-place team. She occasionally played No. 1 as a senior, but she played mostly No. 2 singles for a strong team that went 18-1 and reached the fourth round of the 3A state playoffs.

As a four-year varsity player in basketball, she contributed mightily to three straight NPC championship teams, as well as a third-place team in a 10-team league when she was a freshman. As a senior, Cooper averaged 10.8 points per game and was second team all-county. She made 61 3-pointers as a senior, shooting 38 percent from 3, and shot 84 percent from the foul line.

Cooper, who scored 705 points for the Cougars, is the only player who was a member of all four teams during the best four-year girls basketball stretch in school history. No one in program history has been involved in so many basketball wins.

Cooper missed the three games Carson played in the Dale’s Sporting Goods Sam Moir Christmas Classic back in December, as she was involved in Carson’s Christmas Honors Chorus trip to sing in New York City and Washington, D.C. That couldn’t have been an easy decision, but the singers are also her teammates and that was a once-in-a-lifetime trip.

“She’s all-county in chorus, too,” Stouder said. “Just so well-rounded.”

In the spring, when things are operating normally, Cooper helps out the Cougars in two sports. She’s the dazzling center fielder for Carson’s softball team, but she also appears at the marquee track meets, like the Rowan Championships and NPC Championships, as long as it doesn’t conflict with a softball game.

“The spring is always a busy time, so it’s been different to be at home the last few weeks (due to COVID-19 concerns),” Cooper said. “I miss being at school. I miss my teammates and coaches.”

In 2018, Carson was NPC co-champion in softball, won 20 games and made it to the regional championship series. Carson was NPC runner-up to West Rowan last spring.

In track and field, Carson’s girls have become perennial champions in Rowan County and the NPC. Cooper has been the individual county champ in the triple jump and she’s sprinted on a county champion relay team in the 4×100. While the triple jump is her strongest event, she’s also been a top-five finisher in the 100 hurdles.

In the 2017-18 school year, all four teams that Cooper competes on were NPC champs or co-champs.

“It’s amazing when you think how much Maci impacted four teams,” Stouder said. “She’s clearly an awesome athlete. She probably could’ve picked any one of her four sports and played in college, but she really enjoyed playing everything.”

While Cooper has no plans to compete on a college team, she’s not retiring. She’s going to be a terror in intramurals at Western Carolina University. She’s not sure about her major, but she knows Spanish will be a large part of her studies.

“Our basketball team made a trip to the Dominican Republic before the season, and it was life-changing for me,” Cooper said. “I want to be able to communicate with people all over the world. If you can communicate, you can help out a lot more.”

There’s usually a banquet for all the honorees, although that won’t be possible this year. Athletes such as Cooper and West Rowan’s Max Blackledge will be recognized by the NCHSAA mostly on social media.

“We are honored to recognize this group of student-athletes that have consistently demonstrated the values we hope all student-athletes learn through our programs,”  NCHSAA commissioner Que Tucker said. “Now, more than ever, our society is in need of young people that are dedicated to excellence in sportsmanship and citizenship.”

Sportsmanship and citizenship. Those were always as important for Cooper as the diving catches, momentum-turning 3-pointers and backhand winners.

“I’ve loved playing high school sports — everything about it,” Cooper said. “I’ve had great coaches in every sport and I’ve always had teammates that I loved. We did some great things together.”