High school soccer: South was off to fantastic start 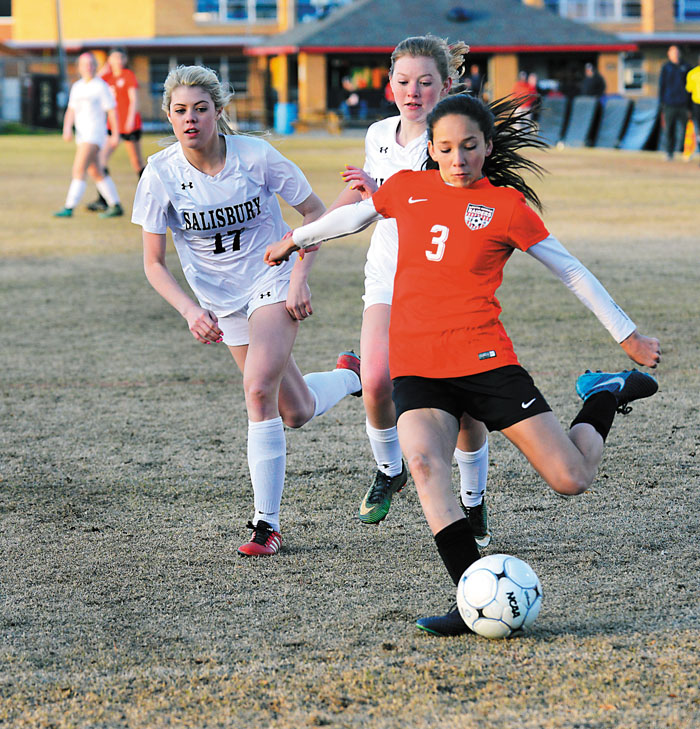 South Rowan's Madison Henry and Salisbury's Olivia Dagenhart (17) go after the ball during a match on March 26, 2018. Photo by Wayne Hinshaw, for the Salisbury Post

LANDIS — “Fantastic” was the adjective that coach Russ Fisher used to describe South Rowan’s start to the 2020 season.

Fisher, South’s boys coach, had taken the reins of the girls this year.

There were five straight wins at the outset of the season for the Raiders, who currently are ranked 16th in 2A by MaxPreps.

Before play was halted in mid-March by COVID-19 concerns, there were bragging-rights county wins for the Raiders against West Rowan and East Rowan.

There also were Central Carolina Conference victories against East Davidson and Ledford that were even more important in the big picture. South was shut out twice by Ledford in 2019 and was outscored 14-2 in two 2019 losses to East Davidson.

“East Davidson and Ledford were great wins for our girls and for the program.” Fisher said. “When you’re beating teams you lost to the year before, it’s usually significant.”

So what changed so quickly?

Well, fast, skilled, talented senior Madison Henry was 100 percent healthy this fall, for one thing. The UNC Wilmington signee was proving to be virtually unstoppable. She’d scored 13 of South’s 20 goals and assisted on two others.

“Madison had a chance to break state records this season,” said Fisher, who expects Henry to be in the East-West All-Star Game if the game can be played in Greensboro this summer. “And we had the girls around Madison to be a very successful team.”

South’s fortunes also had been positively impacted by the addition of a talented freshman class. Freshman Mackenzie Chabala was South’s No. 2 scorer in the early going with five goals, while freshman goalkeeper Cheyanne Hunter had registered two shutouts.

“She’s probably the best keeper South has seen in a long time,” Fisher said. “She has the chance to do for the girls program what Parker Anderson has done in recent years for South’s boys program. She’s going to be special. As a freshman, she’s well ahead of where Parker was.”

Freshman Yameli Landaverde hadn’t figured directly in the scoring yet, but Fisher said her speed on the outside was causing problems for opponents and opening up scoring chances for her teammates.

“The freshmen have taken some of the pressure off Madison,” Fisher said.

Senior Ambar Hernandez also was doing some scoring for the Raiders. She had goals against East Rowan and East Davidson.

Fisher is still optimistic that the season can resume at some point. His team hasn’t stopped working individually.

“They’re all sending me pictures of them working on drills in their yards,” Fisher said. “It’s a great group of girls. I do hope we get to play some more.”