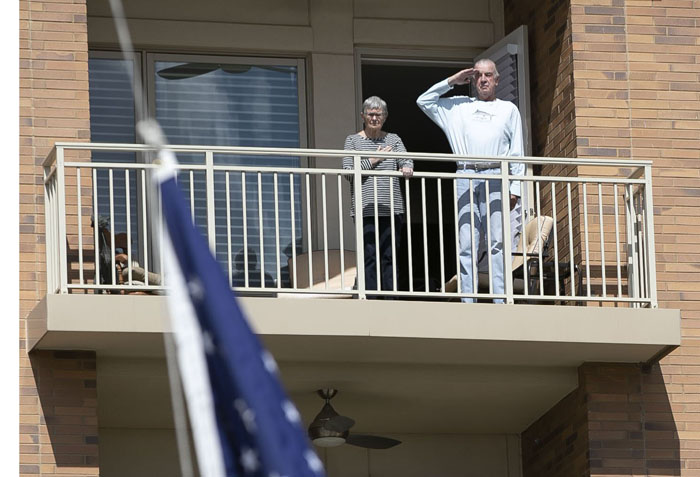 Vietnam veteran John Durfee salutes the American Flag from his balcony as it raised in the courtyard on Thursday, April 2, 2020 at The Cardinal at North Hills in Raleigh, N.C. Durfee's wife Patricia joins him as do other neighboring residents for their morning ritual, staying in their homes now to practice social distancing. (Robert Willett/The News & Observer via AP)

By GARY D. ROBERTSON Associated Press
RALEIGH, N.C. (AP) — North Carolina’s chief legislative economist has estimated that state revenue collections could take a billion-dollar hit during the current budget cycle due to the coronavirus pandemic.
The state could see overall revenue fall $1.5 billion to $2.5 billion below previous collection forecasts for the two-year budget cycle ending in June 2021 because of the economic slowdown, the General Assembly’s chief economist said this week. That forecast projected $51 billion in combined collections for those two years.
Most losses would occur in the fiscal year starting this July, resulting in 5% to 10% less money that year than anticipated, according to Barry Boardman, the economist who wrote an email to Senate budget writers obtained by The Associated Press. He cautioned the estimates are “very preliminary” and that an updated forecast is expected by mid-May.
In comparison, revenues fell more than 15% short of forecasts in 2009 during the Great Recession, Boardman wrote.
The losses also are in stark contrast to revenue surpluses the previous five years, reaching nearly $900 million last year.
Most state revenues come from sales and income taxes.
As of Friday morning, state health officials reported more than 2,000 positive cases of COVID-19 statewide including about 250 hospitalizations. Nineteen people have died. For most people, the new coronavirus causes mild or moderate symptoms, such as fever and cough that clear up in two to three weeks. For some, especially older adults and those with existing health problems, it can cause more severe illness, including pneumonia, and death.
Complicating requirements for a balanced budget is the extension of the April 15 income tax deadline until July 15. That could shift $2 billion or more in collections from the current fiscal year to the next year, Boardman wrote. The General Assembly’s session is still set to begin April 28.
North Carolina lawmakers have at least $3.6 billion in reserves and other cash at their disposal to close the gap. But lawmakers are already receiving a long list of spending requests to prevent agencies, schools and industries from buckling under the weight of COVID-19.
Boardman wrote he anticipates statewide unemployment reaching 7% to 9% at the bottom of the slowdown. About 370,000 people have filed for unemployment benefits in North Carolina over the past two weeks, most of them citing COVID-19, according to a state Commerce Department statement Friday.
“How well we are able to contain the virus so that we can return to our normal economic lives will determine how severe the economic effects will be,” Boardman wrote. “An extended shutdown of several months would see those job losses grow.”
___
Follow Robertson at https://twitter.com/garydrobertson
______
Follow AP news coverage of the coronavirus pandemic at https://apnews.com/VirusOutbreak and https://apnews.com/UnderstandingtheOutbreak