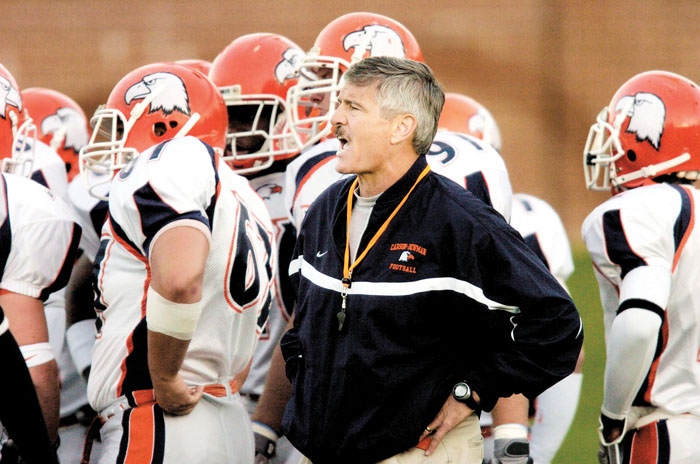 East Tennessee State was the 12th stop on a relentless, 42-year ride on the coaching carousel.

His life was never normal, never routine. He was a baseball lover who became a football lifer based on one fork-in-the-road decision in his 20s.

Baseball was what Torbush loved, and that was the case from the first time he saw Mickey Mantle swing a bat as a child. But football was what he did.

You can debate his brief head-coaching career in Chapel Hill, but there’s not much doubt he was one of the finest defensive coordinators there’s ever been.

When a young Mack Brown brought Torbush on board as defensive coordinator at UNC (a post he held from 1988-97), Tar Heel defenses did marvelous things. UNC led the Atlantic Coast Conference in total defense in 1995, 1996 and 1997 and was among the best in the nation in 1996 and 1997.

Torbush’s life is still eventual. He recently was elected to his third hall of fame. This was the biggest HOF for him so far — the Nashville-based Tennessee Sports Hall of Fame.

He already was a proud member of the Carson-Newman Athletics Hall of Fame, where he was an All-American player in baseball and football, and the Greater Knoxville Sports Hall of Fame. Knoxville is the Tennessee city where he went to junior high and high school. His family moved from East Spencer the summer between his sixth and seventh-grade years. Integration arrived when he was in Knoxville. He was the only white athlete at Austin-East High, which handed diplomas to its first graduating class in 1969.

“Being elected to a Hall of Fame usually means you’re old or they think you’re about to die,” Torbush said with a laugh. “But, seriously, it’s a huge honor. It’s exciting when you get that call.”

They made a major deal out of his Hall of Fame election at East Tennessee State, where he’s probably loved more than anywhere else for taking the school’s program from non-existence to respectability in a short time. There were no players, no stadium, no uniforms and no helmets on campus when Torbush was introduced as ETSU’s head coach in June 2013. In 2015, his team competed in the Southern Conference. In 2016, the ETSU Bucs beat a ranked Samford team. He was inspirational, something of a miracle-worker.

Torbush had gotten the call earlier informing him of his election, but East Tennessee State trotted him out to mid-court at halftime of a February home basketball game, let the crowd know he’d been elected, along with folks like long-time Tennessee Titans coach Jeff Fisher, and gave him a few moments to wave to the crowd and take a bow.

“I’d already gotten the call, but I acted surprised, like it was all news to me,” Torbush said. “I enjoyed it. That was the first standing ovation I ever got as a football coach.”

Now, 68, he’s a hyper-active fellow who still would rather play baseball than watch it. He still talks his wife (Janet) into pitching batting practice occasionally, and he still hits the long ball.

The one perk Torbush had counted on when his life slowed down with retirement was the precious gift of time — time for family, time to travel, time to enjoy ballgames as a spectator.

But COVID-19 concern is impacting lives even in eastern Tennessee.

“Now that I’ve got the time to go places, I can’t do it,” Torbush said. “This is an awful situation for everyone.”

He’s been in robust health since beating a cancer scare in 2011.

He still considers East Spencer home, and he would’ve happily lived out his school days there if his father, a brakeman and a yardmaster on the East Spencer side of the Southern Railway tracks, hadn’t been promoted to terminal train master in Knoxville, Tenn. That was a big break, a big step-up. The family relocated.

He’s come back often to Salisbury, Spencer and East Spencer over the years for liver mush, barbecue and Cheerwine. Torbush Drive was named for him years ago when he was still coaching at UNC. He loves gazing at the old neighborhoods in Salisbury. He says it’s like looking at a place from a different time.

“The last time I came home was when North Rowan’s Class of 1969 held a 50th reunion,” Torbush said. “My wife (Janet) came with me, and it was a chance to see a lot of guys I grew up with, guys like Kelly Sparger that I played Little League baseball with — and a few old girlfriends.”

He also made an unofficial tour of the old East Spencer school building.

“I walked down every hall and walked through every inch of every classroom, and there were so many good memories,” Torbush said. “It’s still home. I hope things are back to normal and the boys are able to play ball at Newman Park and at the Eighth Street Ballpark this summer. If they’re playing, I’ll be making a trip to see them.”

High school softball: Hornets had a shot at double-digit…