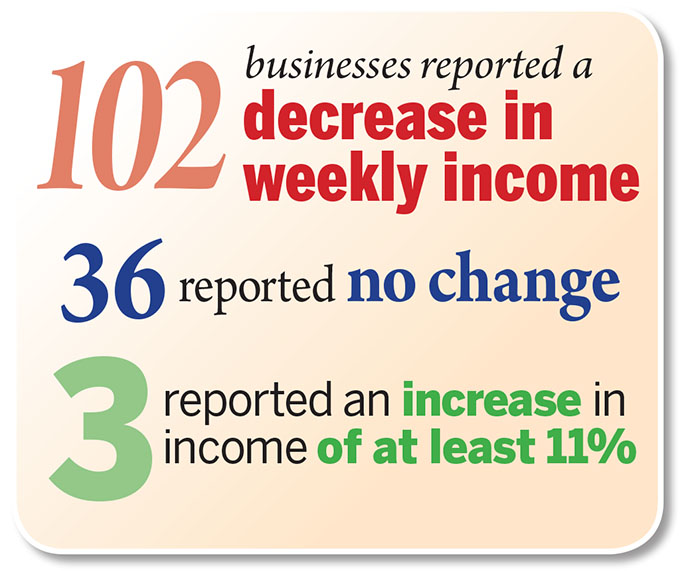 SALISBURY — Findings from a survey sent out to local businesses in Rowan County last week indicate that most companies are being affected by the COVID-19 pandemic, and that the hits are coming fast.

But the extent to which business are affected has varied.

The Rowan County Economic Development Commission sent out the survey last week. Rod Crider, who leads the EDC, says the speed at which businesses have been affected is the only overarching trend among all businesses. Crider added that, while manufacturing companies seem to be doing OK right now, hotels and other businesses in the tourism and lodging sector took a massive hit early on.

Of the companies reporting, 14.3% were in the manufacturing business. Other companies that responded included retail trade, finance and insurance, real estate, accommodation and food services as well as other service such as automotive repair, churches, civic and social organizations, barber/beauty shops and labor union organizations.

Responses among businesses regarding their biggest concerns included the impact of lost income for the employees and anxiety/stress over taking care of their daily and family needs.

Additionally, 102 businesses reported a decrease in weekly income, while 36 reported no change. Three companies reported an increase in income of at least 11%. And 19 of the companies losing weekly revenue reported a loss of 91-100% of income.

Crider said it’s difficult to characterize a summary of the responses overall, but a few things stuck out to him.

One, for example, is that 50%, or 70 companies, reported that they hadn’t talked to a banker or hadn’t previously arranged for business bridge loans from their banker. He added that the Small Business Administration loan program is run by banks, so it’s important for businesses to talk to their banker as soon as possible to discuss various options. SBA loans provide small businesses that have been impacted by the COVID-19 outbreak with low-interest, federal disaster loans.

The top three future concerns reported by the companies included decreasing consumer confidence/spending and the financial impact on operations and/or liquidity and capital as well as a global or U.S. recession. Employee stress was another concern for almost 40% of the companies.

Those concerns showed Crider that “people are looking at the big picture here,” he said. But he recognizes there are some immediate issues that have to be addressed now, especially regarding concern for the well-being of employees.

Surveying businesses has become a global effort among approximately 250 other economic development commissions, Crider said, adding that the various commissions are conducting similar surveys in hopes of discovering data and trends that can be helpful for businesses.

The Rowan EDC plans to send out more surveys every other week or so to continue monitoring the impact of COVID-19 on businesses. In the meantime, the EDC, as well as other organizations like the Rowan County Chamber of Commerce, are working to monitor resources being funneled by the federal, state and local governments. That includes the $2.2 trillion coronavirus relief stimulus package passed by the U.S. Congress last week.

“Everybody in our position is just trying to be helpful and as supportive as we can,” Crider said.