High school softball: Hornets had a shot at double-digit wins 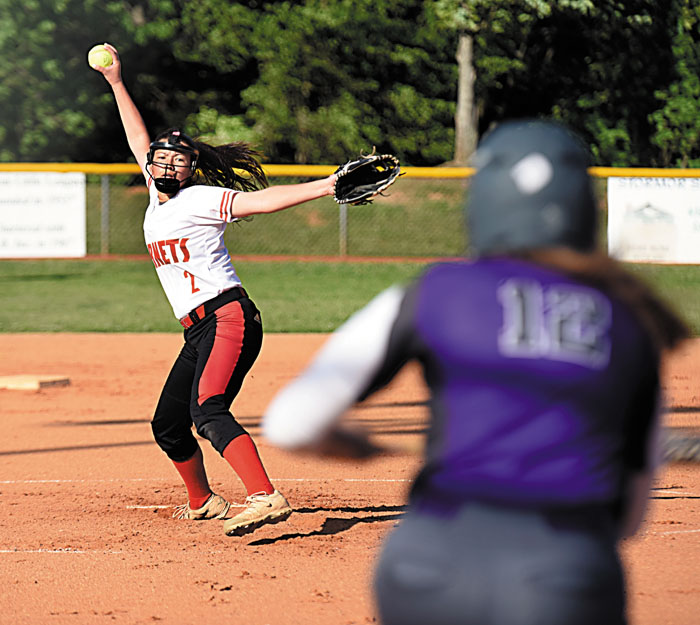 SALISBURY — Championship banners are common in a wide range of sports at Salisbury High, but softball success has proven to be a difficult barrier to hurdle.

When Salisbury won nine games in 2019 under first-year coach Scott Cozart, it marked only the second time the Hornets have won nine times in a season in this century.

Salisbury’s 2015 team went 9-9 overall, the only time the Hornets have broken even in this century. Those 2015 Hornets were 6-4 in the league with sweeps of North Rowan, Lexington and Thomasville. But the Central Carolina Conference of 2020, with softball bullies North Davidson, Central Davidson and Ledford thrown into a 10-team mix, is a much different animal than the six-team league of 2015.

Still, the SHS program is showing signs of being on the upswing. Salisbury swept South Rowan last season and finished ahead of the Raiders in the CCC, which surprised some people.

One of those two losses came in a well-played game in which Salisbury led East Davidson 1-0 going to the seventh, but eventually fell in extra innings. That was a disappointing result, but it also was encouraging. Salisbury never has finished ahead of East Davidson in the CCC standings.

“Their pitcher got a triple to the fence in the top of the seventh and scored the tying run,” Cozart said. “Then in the eighth inning they were seeing our pitcher (Ellen Yang) for the fourth time through the lineup. They finally figured her out.”

Yang struck out 15 Golden Eagles before they figured her out.

Salisbury’s other loss — 11-0 to North Davidson — sounds discouraging, but it wasn’t a negative. North Davidson will always be one of the best programs in 2A and wiped out the Hornets 16-1 and 15-0 in 2019, games that went three and four innings. This time the Hornets lasted five innings. That may be a baby-step, but it’s still a step in the right direction. It’s progress.

“I was tremendously encouraged by what I’d seen from our girls in the early games,” Cozart said. “We were really looking forward to a strong season and we were hoping to move up in the CCC standings. In those first five games we played, we met every goal that I set for this team — or exceeded them.”

Cozart praised first-year assistant coach Leah Huggins, who was a standout outfielder at Catawba a year ago. She’s made the adjustment from playing with girls who have excelled in softball most of their lives to coaching girls who, in many cases, have limited experience with the sport.

“Leah had to switch gears, but she’s doing a great job,” Cozart said. “We don’t have the talent of some schools. We don’t have the number of travel-ball players the county schools have. We’ve got six girls who are brand new to softball. We’ve got German exchange students who are learning the game.”

Yang has been a student of the game for a while. She had 18 strikeouts and walloped two triples in a 5-0 non-conference win against South Davidson.

The NCHSAA hasn’t officially canceled the rest of the 2020 season and continues to offer glimmers of optimism, but the earliest possible return to the field would be on May 18. Usually, the state playoffs are well underway at that point.

Cozart hopes his team will take the field again. He has three seniors — catcher Journie Dawson, second baseman Caroline Harrell and Jaliyah Oats, a member of Salisbury’s CCC champion basketball team who can play third base or outfield.

He’d like to see those three girls have some closure to their careers.

The other player who was off to an exceptional start at the plate for the Hornets was Cozart, a freshman first baseman who is the coach’s daughter. She was 5-for-11 (.455) with an inside-the-park homer and two doubles.

“There’s talk among coaches about trying to do something for the seniors, trying to give them one more chance,” Cozart said. “I hope something happens. It’s hard to be sitting. It’s hard to not be practicing and playing.”