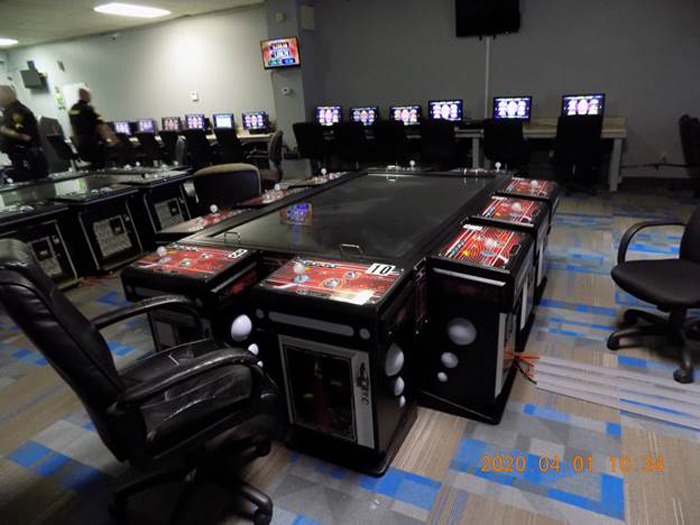 SALISBURY — Rowan County Sheriff’s Office investigators on Wednesday executed a search warrant at the now-shuttered Fishzilla Arcade, which the agency says was an illegal gaming establishment.

The sheriff’s office seized various equipment in the raid and said the operators of the business at 1812 East Innes St. could face criminal charges. The agency has been investigating and pressuring closure of businesses more frequently called “fish arcades” for more than two months. Fishzilla Arcade was allegedly committing violations that included allowing customers to bet credits in violation of state law and paying cash for winnings, also a state violation, said Capt. John Sifford.

The sheriff’s office determined that the business had a total of 37 server-based gaming terminals operating with the use of a mouse. The terminals were using “Aloha,” “8Fuse,” and “Gateway” software.  Additionally, the casino had four fish tables with a total of 38 terminals that offered a variety of games.

A news release said investigators searched the gaming systems and confirmed customers were able to wager credits exceeding those allowed by law. Having more than five machines makes this violation, a felony, the sheriff’s office said.

The Rowan County Sheriff’s Office has maintained “fish arcades” are essentially illegal gambling establishments and have been crime magnets for drug transactions, robberies and murder.

The particular establishment raided Wednesday was the site of a shooting in 2018 that resulted in the death of an Albemarle barber. James Christopher Davis was an employee at the business when he was shot and later died at the hospital. Dedric Michelle Mason, a social worker, was charged with second-degree murder.

In January, the Rowan County Sheriff’s Office began notifying operators of suspected casinos that the sheriff’s office would begin enforcement of North Carolina law. The notifications were via hand-delivered letters in addition to media coverage.  The operators were told the Rowan County Sheriff’s Office intended to “vigorously enforce” the state laws as they pertained to illegal gambling, which included sweepstakes, fish games and similar businesses.

The businesses were told to cease operation by Jan. 20 or risk the consequences such as arrest and seizure of equipment and profits from their illegal businesses. After business were notified, some ceased operation, some remained open and some briefly closed and then reopened. The FishZilla Arcade had been open sporadically since the public notification, Sifford said.

The Rowan County Sheriff’s Office said in a news release it has identified operators of the FishZilla Arcade and will consult with Rowan County District Attorney Brandy Cook regarding appropriate charges.