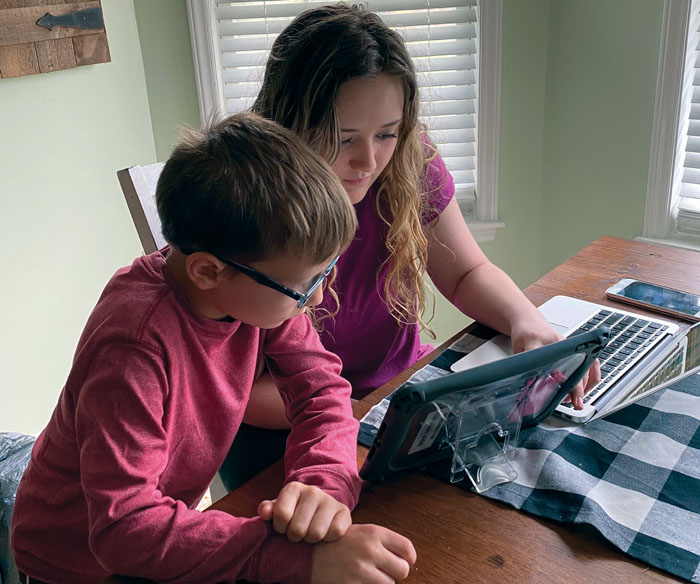 Courtesy of Linda Smith — East Rowan High senior Jaylee Usher is helping her cousin Elijah with schoolwork as Elijah's stepmother and father undergo cancer treatment during this time. Elijah is one of five boys that Jaylee and her brother Cayden help.

SALISBURY — Wanda Cohoon says everybody has a talent that can help someone else.

Wanda, 63, and her husband, Rodney, have both recently received cancer diagnoses, leaving little room or energy for them to dedicate helping their five adopted children with their schoolwork — especially since students across the state have been ordered to stay home amidst the COVID-19 pandemic. Fortunately, Wanda’s niece and nephew, East Rowan senior Jaylee Usher and her brother Cayden, a sophomore, have stepped in to help.

Rodney adopted Isaiah, Elijah, Jonathan, Joseph and Harold after his late wife passed from a sudden heart attack in order to keep all boys together. In October, Wanda and Rodney got married and moved from South Carolina to Rowan County.

The five boys all struggle with ADHD and the ability to focus, Jaylee said. Thus, the boys are behind in school and can’t read well. So, because Jaylee had help growing up and is now able to take advanced placement courses, she wants to help them get back on track, too.

“I have the ability to help them,” Jaylee said. “They’re not going to fail classes because I’m here to help them.”

Jaylee said she keeps a list of each boy’s name and what their assignments are for the week. She focuses on helping the older boys while Cayden works with the younger ones. Both Jaylee and Cayden arrive to the boys’ home around 10 or 11 a.m. and stay until 4 or 4:30 p.m. Jaylee said she works on her homework when she gets home and, fortunately, is only taking four courses this semester.

Jaylee said she uses hands-on techniques to keep the boys interested. She uses pizza and basketball to explain fractions. And on Fridays, if the boys have racked up enough points for getting their work done, they can participate in a “Fun Friday.” Last week, Jaylee said the boys enjoyed a bonfire, made s’mores and slept in a tent. Over the weekend, she took the boys to play with water balloons and a slip-n-slide.

“(They can) kind of be kids, but when Monday rolls around, it’s back to school work,” she said.

Wanda said she is no stranger to her niece Jaylee’s help. She said Jaylee helped her during her first round of cancer before she married Rodney.

She added that the tutoring is “the sweetest thing in the world because (the boys) are getting what they need and getting their encouragement.” The experience overall has made for a “family-oriented bonding experience” as her boys have gotten to know her side of the family since Wanda and Rodney’s marriage.

And Wanda hopes Jaylee can still provide help to the boys over the summer. Jaylee said she wants to be able to help as much as she can in the fall when she’s studying nursing at Eastern Carolina University, even if it’s by using video chat services.

The cancer diagnoses prompted Jaylee and Cayden’s mother, Linda, to think, “there’s a lot of families that find this overwhelming.”

Linda hopes Jaylee and Cayden’s efforts will inspire other young people to help younger children with their schoolwork, particularly during a time when students are home with parents and grandparents who may be overwhelmed with new realities.

“There’s always someone out there that needs help,” she said.