CHINA GROVE — Before a China Grove man was charged with trying to break into a local church, neighbors say they spotted someone trying to sell drugs in the parking lot. 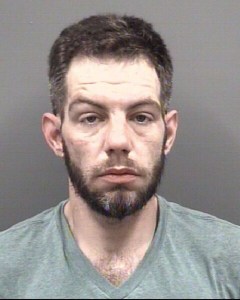 Dustin Blake Sloop, 32, of the 800 block of Old Linn Road, was charged this weekend with misdemeanor attempted breaking and entering, misdemeanor injury to personal property and misdemeanor probation violation. He remains in the Rowan County Detention Center under a $13,000 secured bond.

A neighbor contacted authorities to say they saw what appeared to be someone inside a blue car conducting a drug deal in the parking lot on March 5, said Rowan Sheriff’s Capt. John Sifford.

Sometime between 10 p.m. and 11 p.m. on March 5, someone tried to break into the church. The caller said a male wearing a blue hooded sweatshirt, jeans, a baseball cap and shoes with red soles was tearing down the church’s motion lights.

A deputy arrived and found Sloop on the property. He told the deputy his name was Justin Blake and, later, that it was Blake Adinolfe, which is the last name of someone Sloop knows, Sifford said.

According to an incident report, Sloop appeared under the influence of an unknown substance. Sloop told the deputy he was looking for a friend. Sloop could not provide the friend’s name.

Sifford said Sloop was not arrested. Instead, arrest warrants were issued March 7 and served on March 27 at Sloop’s home, which is located near the church.

The damage to the church included pry marks on a side door, four broken motion lights, bent screens on exterior windows and a bent gate that contained an air conditioning unit.

A pocket knife was found near the door that had pry marks on it. A golf club was also found and collected as evidence. Prior to the attempted break-in, a witness told deputies, they saw Sloop in the front of the church “acting crazy” with a golf club.