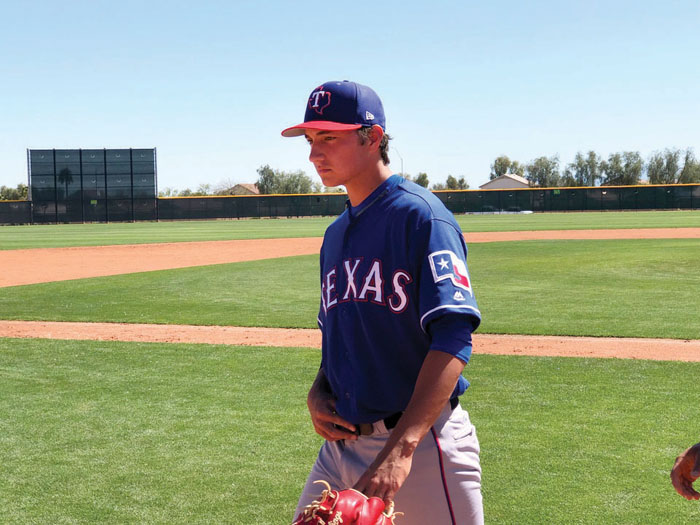 Owen White has bounced back from Tommy John surgery for a torn ligament in his elbow. File photo by Jeff Wilson/Forth Worth Star-Telegram

With the Texas Rangers complex in Surprise, Arizona, shut down by COVID-19, promising professional pitcher Owen White is continuing his rehab from ulnar collateral ligament surgery at home. In layman’s terms, UCL surgery is elbow joint surgery. In baseball terms, it’s Tommy John surgery, named for the pitcher whose career it saved back in 1974, 25 years before White, who turns 21 in August,  was born.

“My mom (Casey) had me spreading pine needles around the yard on Monday,” White said with a laugh. “A pine needles workout is a pretty tough workout. But being back home and with the gyms closed, I guess you have to be creative.”

Tuesday was supposed to be a glorious home opener for the Rangers at their new park — Globe Life Field — which cost $1.2 billion. Construction began in 2017. Now the 40,300-seat stadium, which includes a retractable roof, is an architectural marvel, but it sits silent and empty, a victim of COVID-19, waiting for the return of noise, the return of Texas Rangers and fans.

The goal is for White to pitch at Global Life Field once his right arm is healthy, and once the world is a healthier place. When he was drafted in the second round in 2018, he was projected to grow into a role as a frontline starter for the Rangers.

The son of two great athletes and inspired by three older, athletic sisters, White enjoyed a storybook career at Carson High that included Gatorade North Carolina Baseball Player of the Year honors as a senior and back-to-back Rowan County Athlete of the Year awards. He signed with the University of South Carolina, but when the Rangers made him the 55th pick in the draft and offered him $1.5 million to skip the college experience, he entered the pro ranks.

White was rated as the 15th-best prospect in the Rangers’ farm system not long after he signed. The Rangers were ultra-cautious, extra-careful with his workload following the draft.

But White’s right arm lit up on a pitch he threw in extended spring training in Arizona in April 2019. Tommy John surgery followed on May 1. While that operation has become fairly routine for hurlers and odds are favorable, full recovery isn’t automatic. The success rate is in the 85 to 90 percent range.

After the surgery, the Rangers placed White on a 16-month recovery timetable, with the goal being a return to full health on Aug. 20, 2020.

The first few months were the toughest, with slow and sometimes painful progress, as White’s arm slowly straightened from a 90-degree angle to 180 degrees. Next came flexibility exercises, and then light throwing.

“It’s a day-by-day experience,” White said. “If you do your stuff, everything else will fall into place. You’ve just got to trust the process.”

White says he was still right on schedule as the calendar turned to 2020.

He was following his rehab program in Arizona in early March when COVID-19 fears started to get serious. The last Spring Training games were played on March 11. There won’t be any baseball before May, and the wait may be a lot longer than that.

“Everything was feeling good and going well with my rehab, but I knew the day they canceled the NCAA basketball tournament (on March 12) that this baseball season was going to be affected a lot,” White said.

The Rangers had called in White during the second week of March to talk about his scheduled “deload week” and a trip home that he had coming up. A “deload week” is basically a break from the rigors of  daily training. The idea is that this enables your body to fully recover and come back bigger and stronger.

“They called me in for a meeting in Arizona and asked me to stay on there through March 21, when I was scheduled to go home, and I was going to stay,” White said. “Then it was later that same day they called me again and said everyone was being sent home. It all blew up fast, and then I was on a flight home.”

White isn’t totally on his own at home. Technology keeps the Rangers close. Via FaceTime, there’s steady communication with coaches and trainers, who carefully monitor White’s progress.

White has thrown from a multitude of different distances, longer and shorter, but he hopes to be throwing fastballs soon from the standard 60 feet, 6 inches off a half-mound. Then he’ll progress to throwing fastballs and changeups off a mound of regulation height. Eventually, he’ll be permitted to mix in sliders and curveballs. Then he’ll progress to throwing batting practice before he makes the long-anticipated move to actually pitching in live games.

White has pitched to batters who are being paid to hit in instructional league settings and spring settings, but he’s still never been in a true minor league game.

“The breaks of the game,” White said. “But I do feel really good. My body has gotten a lot of rest and I’ve gotten stronger.”

The 6-foot-3 White has built himself up considerably since his high school days. He was usually listed at 170 pounds when he was drafted. He was at about 188 when he had surgery. Now he’s at 203, and his gains have been muscle. Part of the growth is weight training and nutrition. Part of it the natural maturing process.

Now he finds different ways to get his work in every day and he dreams about buckling the knees of hitters at Globe Life Field.

“I still believe everything is going to fall into place,” White said. “Pitching at Globe Life — that’s the plan.”