High school basketball: McCain moves on after 5 seasons at South 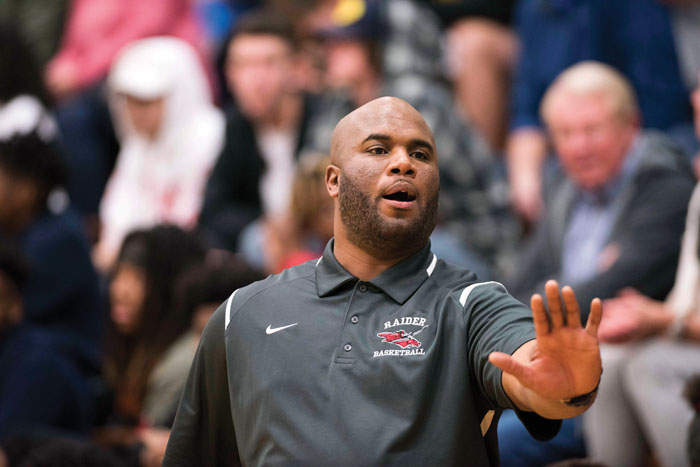 CONCORD — South Rowan is in the process of identifying its 10th head boys basketball coach.

The ninth man to hold that job, Andre McCain, coached the Raiders for five seasons. He’s currently teaching earth science (via electronic technology) at Carolina International, a charter school in Concord. Most of his students are freshmen.

“An opportunity at Carolina International School came to me at the beginning of the year that I couldn’t pass up,” McCain said. “I thought about it, prayed about it and made the decision to make the move, but I wasn’t going to leave in the middle of a basketball season. I did finish out the season. The guys did their best. They never stopped coming to practice and never stopped wanting to get better and working to get better.”

McCain, made the move not because he grew weary of hoops, but because he has two daughters, ages 11 and 14, who are middle school students in Concord. He plans to move to Concord in the near future.

South boys basketball has never been an easy job. Whoever follows McCain will have their work cut out.

The last winning season (14-13) for the Raiders was 11 years ago. In 59 basketball seasons, the program has enjoyed four first-place finishes. The most recent conference championship came in the measles-shortened 1989 season.

The most recent season in which South managed to finish second or third in its league was coach Bob Parker’s 1995-96 team that tied for second in the 4A Central Piedmont Conference. That team also was the last South team to win 20. Those Raiders — Tony Propst, Jason Cross, Jason Crook, Ashanti Miller, David Arey and Cedric Little led the way — were also the last South players to celebrate victory in the Christmas tournament at Catawba.

McCain brought an impressive background to the job at South. He played on a national championship AAU team. He played on a state championship team at West under coach Bob Shipwash and he played on Mike Gurley’s first two powerful West teams, clubs that won 51 of 59 overall and 30 of 32 conference games. McCain was a solid starter for the Falcons, playing alongside superstar teammates such as Scooter Sherrill and Donte Minter. His high school teams were 96-23.

McCain also played football for coach Scott Young at West and picked up a lot of life lessons from him as a running back. He played college football for Elizabeth City State for three years and graduated from East Carolina in 2004.

McCain worked as an assistant strength and conditioning coach at N.C. State, before returning to Rowan County in 2010.

He was one of the coaches who guided a 13-under national championship team.

He assisted in football and basketball at East Rowan before moving over to Carson, where he was a key assistant for coach Brian Perry on good teams. Carson won 17 games twice in that stretch with players such as Tre Williams, Colton Laws, Jacob Raper, MyQuon Stout and Marquez McCain, Andre’s nephew.

McCain’s goal was to bring a winning mentality to South when he was hired in the summer of 2015. He appreciated the opportunity to be a head coach, but South was playing in a stacked 3A South Piedmont Conference with the Cabarrus schools. The odds against him proved insurmountable.

“I had a lot of experience with winning and tried to change the mind-set at South, but it was a challenge,” McCain said. “There were a lot of losses in five years.”

McCain endured an unprecedented 0-47 start to his head-coaching career before South beat East Rowan in two overtimes in the last game of the 2016-17 season to give him his first victory. On an average night, South was outscored 71-49 in the 2015-16 season and by an average of 66-43 in 2016-17. South didn’t have a chance very often.

The best team McCain got to coach at South was the 2017-18 squad that had some size and some depth and a strong core of seniors in the Raiders’ first season of competition in the 2A Central Carolina Conference. Bailey Graham and Tyrese Shaver led the Raiders to seven wins. On an average night, South scored 60, while allowing 67, so there were a lot more games that South could have won or nearly won.

“The move to 2A and the CCC gave us a much better chance to be successful on the court,” McCain said. “We beat Thomasville twice that first year (73-72 and 82-77 in overtime) and we beat Ledford. Those were really good wins for our guys.”

“Eighteen conference games is a tough road,” McCain said. “As a coach, you’d really like to have a month or so to build up to conference, but we always were playing league games in November. ”

South was in a 10-team league for all five of McCain’s seasons (two in the SPC, three in the CCC).

“The CCC is a good 2A league, and the league was exceptionally strong this year, with Salisbury, Thomasville, North Davidson, Lexingaton, Ledford and Central Davidson all having good teams.” McCain said. “The most memorable game for me was the West Davidson game late in the season. We knew we needed that one to finish in the top eight and qualify for the CCC tournament, and our guys gave one of their best performances. They played hard and played for each other. That was a gratifying win.”

Junior Braden Graham, who led Rowan County in scoring this season with 19.7 points per game, was All-CCC and first team All-Rowan County. He’s on track to become only the second 1,000-point scorer in program history and the first since Larry Lentz in 1989. Barrett Thompson, South’s No. 3 scorer, also was a junior. There are six more Raiders who contributed this season who were sophomores or juniors.

The CCC isn’t likely to get any easier, but at least South’s next coach will have some experienced players to work with.

“Looking at the program from outside, people tend to just see the wins and losses, and I understand that,” McCain said. “But I did see improvement.  Guys improved as far as their knowledge of the game. Guys learned how to deal with adversity better. I thought our guys were resilient. Most nights, we hung in there and we competed.”

McCain, 39, said he isn’t planning to coach at Carolina International next season.

“They have talked to me about it and nothing is set in stone, but I’d really like to take a year off,” McCain said. “I think a year would help me get the passion back.”

Other head-coaching positions that are open in the county include North Rowan football, East Rowan boys basketball and East Rowan girls tennis.