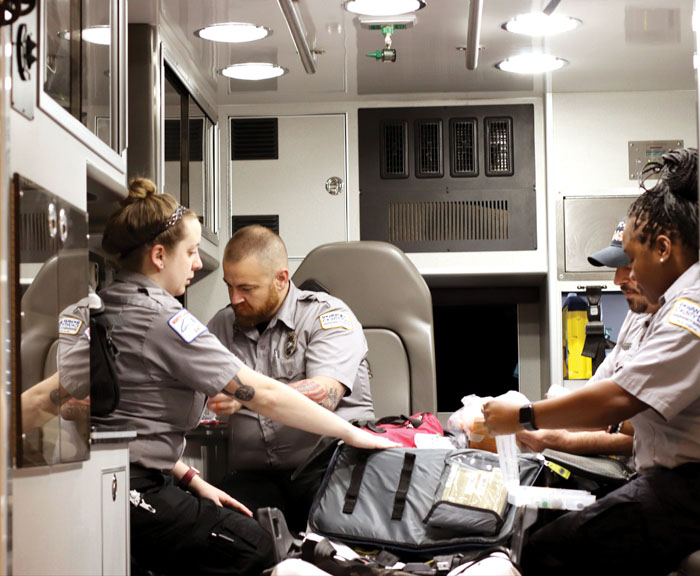 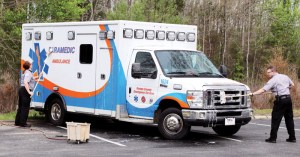 SALISBURY — Some local first responders are seeing changes in call volumes and types during the outbreak of COVID-19 here.

For example, the Salisbury Fire Department on a typical day runs an average of 18 to 22 emergency calls, but they’ve seen a decrease in medical calls. The decrease is due, in part, to the COVID-19 outbreak. The department is only responding to critical, or severe, calls and not minor ones. Emergency Medical Services would still respond as usual to any call.

“Citywide it has impacted us,” said Division Chief Jay Baker.

He said medical calls, which make up a majority of the department’s volume, are down to an average of eight to 12 calls now. The Salisbury Fire Department, by comparison, responded to 6,400 calls last year (about 530 a month). Of those 6,400 calls, 57% were medical.

Baker said during “downtime” firefighters are still training but in a different way. Training is now limited to three to four people. Before the outbreak, training drills were conducted with two companies, which included three to four firefighters from each as well as an instructor.

Firefighters are learning as much as they can about the virus and putting new protocols in place that would allow them to social distance themselves, Baker said.

He said sleeping quarters, for the most part, were already in compliance.

Police Chief Jerry Stokes said call volume for the department is lower in some areas, but officers are seeing an increase in domestic-type calls.

He said the calls are not necessarily domestic violence. They may just be disputes.

The department also has readjusted staffing to meet the demands of the crisis.

“We are not having the officers gather for a briefing or equipment check to lessen the possibility of a team all getting sick at once. We have limited their time at the PD as well,” he said.

Robinson said it’s the agency’s hope that the decrease means people are staying at home if possible and being socially distant from others.

When responding to patients now, EMS personnel begin by distancing themselves upon initial contact and, once the patient is screened, they can get a little closer, he said.

“At this point, we put a surgical mask on them regardless if they have signs and symptoms,” Robinson said.

He said EMS had a small reserve of masks but have since placed orders with the state and their regular suppliers. They’ve had a small amount of items trickle in and “hopefully the supply will pick back up shortly,” Robinson said.

“We’re still here and we will be here. Everybody here is dedicated to the community and taking care of the community. They are doing a great job and will see it through,” Robinson said.

He said one of the best ways to prevent the spread and reduce the burden on the medical community is to stay “socially distant” from others and stay home.

While calls are down slightly, not much has changed for the staff at Rowan County 911 Communications, said Director Allen Cress.

“We run between 500 to 600 calls for service per day. The time of year doesn’t have a lot to do with it. Although, spring and summer is a little busier but is not significant,” Cress said.

He said there’s just not a whole lot of change from the norm when it comes to 911 communications.