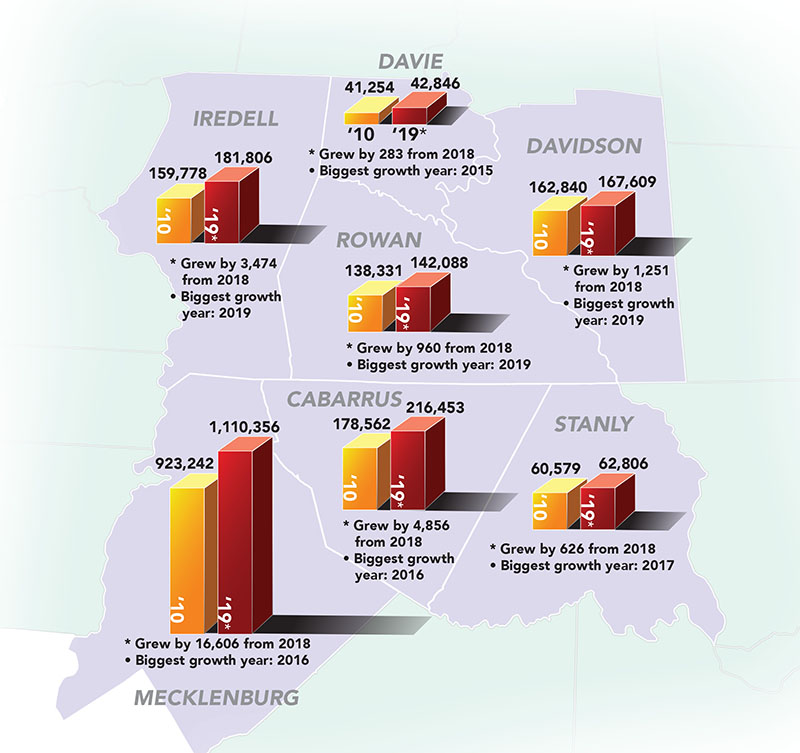 SALISBURY — Compared to neighboring counties, Rowan County maintained a relatively flat increase of 960 people from 2018 to 2019.

But last year produced the largest population growth in the period since the previous U.S. Census in 2010, and some in the county anticipate more significant growth in the next few years because Chewy’s distribution site and the widening of Interstate 85. Optimism isn’t dashed by the state’s partial shutdown because of the COVID-19 outbreak.

The data come from annual estimates of the resident population from July 1, 2010 to July 1, 2019. The Census released its most recent estimates last week.

Rowan County commissioner Greg Edds attributes the growth of neighboring counties, including Mecklenburg and Iredell counties, to their proximity to metropolitan areas. But he anticipates “quite a bit of growth” over the next five years now that I-85 is complete and Rowan County is preparing for more jobs.

“When you bring a Chewy to northern Rowan County, you’re probably going to manufacture your own growth for that part of the county,” Edds said, adding that it’s likely there will be more housing developments to accommodate the workers who move to the area.

Victor Wallace, president of Wallace Realty, echoed that same message, crediting the county with a housing “upspring” due to the prices of land for developing property in the county right now.

Wallace also attributed future growth to the county’s lower cost of living, a “political wheel energizing job growth” and a lower population density. He added that the county is especially attractive for individuals in their late 40s and early 50s due to the proximity to metro areas without the traffic congestion of such metropolitan areas and due to the county’s “slower pace lifestyle.”

However, Wallace said one reason for the relatively stagnant growth over the past year is because of the school system. But since the Rowan-Salisbury Schools system has received funding, particularly for the Renewal program, he said the county is in the “effort phase” of increasing school quality, which will be attractive for younger families raising school-aged children.

Edds said he doesn’t think Rowan County would have been prepared or ready for a significant population growth before now because of past infrastructure challenges.

“We’re much more ready for growth now than we were just a few years back,” he said.

East Spencer Mayor Barbara Mallett echoed the same message of being ready for growth due to Chewy’s distribution site be located near the town of East Spencer. She anticipates growth in the town due to recent purchasing of vacant lots and the filling of apartments, like the East Winds Apartments, for example.

Mallett added that East Spencer has been preparing for the growth and cited an 83-acre site near Exit 79 that’s ready for development.

“We’re just waiting,” she said, adding that, “we are that gateway into the county.”

Edds said that population growth allows leadership to know “they’re on the right track.” He added that people come here by choice, because the people are nice and because both amenities and opportunities are available.

Here’s how the population growth for other neighboring counties look:

Blotter: Rockwell man charged with assault on female and…