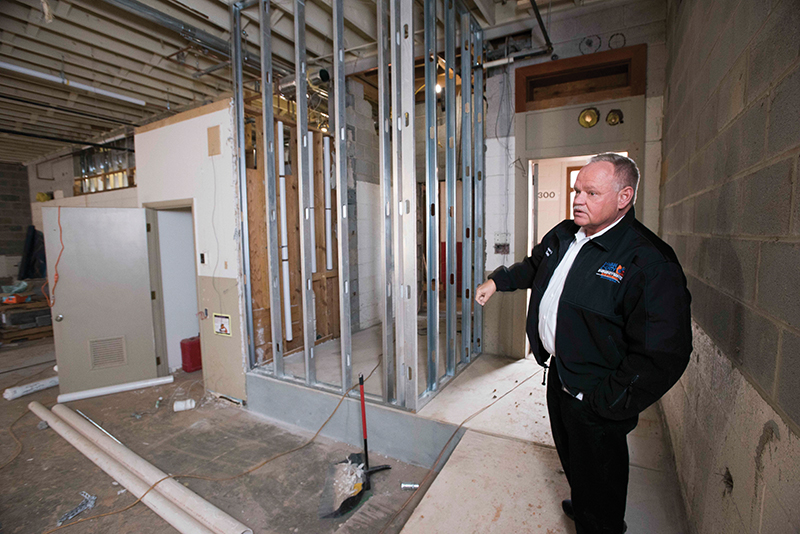 It’s not just the media center. Another part of the former Cleveland Elementary School is getting a new use as the West Rowan EMS station, Station 88.

Formerly housed in a nearby movable building, the new station was once a kindergarten classroom connected to the main building by a breezeway, says Lennie Cooper, EMS division chief.

Frequent rains this winter slowed construction a bit, particularly on the outside, but Vertex Construction, which is also refitting Cleveland’s former auditorium and media center into the West Branch of Rowan Public Library, has worked to catch up.

The building will house quarters for EMS personnel, an office and equipment room and bathroom. A metal building will be attached to house the ambulance for the station. The former red brick building also will get a coat of gray paint to go with the pre-engineered metal building that is going up.

The school building itself was not tall enough to house the EMS unit, Cooper said, but is an improvement over the modular building that has been housing the crew.

Cooper said that modular building can be picked up and moved to another location, replacing older, smaller stations.

The new station in the former school building has two levels. One will be used to store items such as a trailer that EMS uses and equipment such as generators, some of which were stored in the open previously.

There will be room at the station for a spare ambulance, which ends up at various stations depending on the last one to need it, Cooper said.

Vertex had to remove most of the building’s interior, replace all the plumbing and electrical work. But the footprint remains the same, and the plaque outside stating when it was built on the school will remain.

The electricity was tied to the old school building, and radiators heated the space. All that has been upgraded.

Cooper said the town of Cleveland approached Rowan EMS more than six years ago and asked for a station to reduce response times to the town and residents along U.S. 70.

Cooper said the Hurley School Road station, also off U.S. 70, was used for emergencies, but that the new station will shave off 8-10 minutes response time, “and that’s critical in so many cases,” he said.

The classroom, complete with a vintage green blackboard, will house the office and the area for EMS workers. It will include a bathroom that conforms with the Americans with Disability Act, a kitchen area, and places to eat and rest. The storage area also has a bathroom, and a small space between the two rooms that housed electrics, etc., will be used for the same thing and a data center.

The metal building holding the ambulance and, at times, a spare unit will have two bays, with doors at front and back to keep the traffic flow around the building and away from the surrounding structures.

The crew side, which was the classroom, had large windows, but they were 65 years old. So, they will be replaced with tiers of new windows. The bottoms will be translucent, and the top row will be clear to let in more light. The interior will be painted an orange color, with blue on the outside walls facing the street. Blue and orange are EMS colors.

Most stations do not have a washer and dryer, but Cooper said they will be added in the electrical room.

Cooper asked to keep the chalkboard so workers can use it like a spirit rock, and he’ll make sure they  have chalk and erasers.

“But they can’t clean the erasers on their black pants,” he joked.

The exterior wall on the storage side had to be rebuilt. A concrete canopy over the door actually pulled the bricks away from the structure. New doors will also allow easy access to the things in the storage area.

The parking area is small, with five spaces and one that is handicap accessible. Mostly there will be just two people there at a time, but more during shift change.

Cooper said, “I’ll be glad to get something permanent out here.”

With a large industry in Daimler nearby, the school and residential areas, having a quick response time is important, he said.