Spirit of Rowan: Wallace Cancer Institute will provide services under one roof 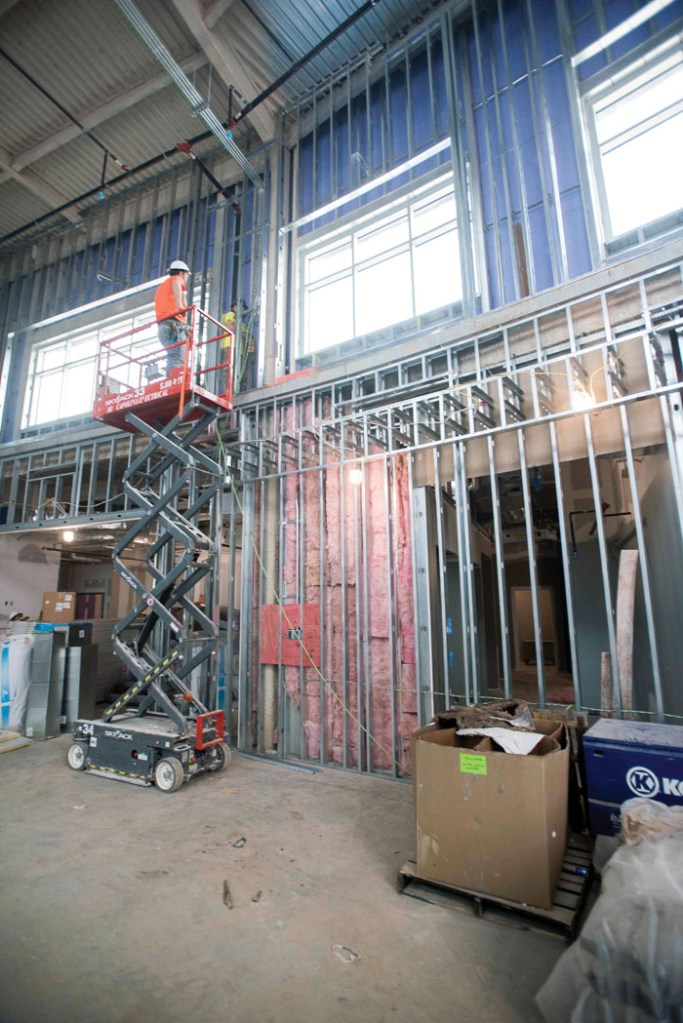 JON C. LAKEY/SALISBURY POST The front entrance foyer. Work continues on the Wallace Cancer Institute on Mocksville Ave across from the Novant Health Rowan Medical Center. Drywall, wiring and the installation of the new 15 ton bi-parting sliding doors that will secure the Linear Accelerator for Radiation Oncology. Salisbury,North Carolina,2/26/20.

Four years ago, when it decided to create a single destination for patients, Novant Health Rowan Medical Center made a decision to change its trend of often sending patients to other facilities for cancer treatment.

This summer when it’s scheduled to open, the Wallace Cancer Institute, a 32,000-square-foot-facility, will allow patients to receive care under one roof. The building will combine Novant Health’s radiation and medical oncology departments in addition to clinical trials, genetic counseling and other services. Novant previously had radiation and oncology, imaging and its infusion center on the third floor of the hospital as well as some medical and oncology physicians who work with Novant but were not part of the Novant Health system, said Rick Parker, director of Rowan Medical Center Foundation.

The cancer center was the result of many priorities, but it was also the result of a promise Parker made to foundation supporter, the late Tippie Miller, who died of cancer in 2017. While undergoing treatment, Miller would provide feedback about her experiences. She had chemotherapy and then returned to her car for radiation treatment elsewhere.

“Every time you have to do that, it’s not that far away but you have to get out and it becomes a burden on patients,” Parker said.

Parker said Miller had a support system, but that isn’t true for patients whose support may run thin over the life of their cancer treatment. Some patients don’t have a vehicle while others may not have the gas to travel out of town and to other locations locally.

“It could become complicated. This makes it easier for patients and their families,” Parker said.

In 2018, the Novant Health Rowan Medical Center Foundation announced that the name of the facility — The Wallace Cancer Center — would recognize husband and wife, Lee and Mona Lisa Wallace, whose substantial donation brought the foundation’s capital campaign to just over $7.4 million. It has since received a slight tweak from “center” to “institute” to match Novant’s naming conventions for cancer care locations.

In addition to consolidated, existing services, others will include genetic counseling, access to clinical trials and research, palliative care and nurse navigation. Special amenities and support services will include a resource library; areas where patients can meet for support groups and workshops; a wellness garden; a Look Good, Feel Good Boutique; and a gift shop that will be run by the Rowan Medical Center Auxiliary. The facility will also have space for physicians to meet in collaborative teams to discuss leading-edge treatments for cancer patients.

Parker said the construction remains ahead of schedule. The facility is expected to treat patients in early August.

Close to 900 cancer patients received services through Novant Health, and Parker said he expects that number to go up, with patients coming from the surrounding communities to the facility.

In late February, the cancer institute was at 90% of its fundraising goal, with $11 million raised and contributions from 12,000 donors.

The goal, Parker said, is to finish the capital campaign in July. However, the fundraising does not end there.

“We will always be raising money to help patients who can’t afford anything,” he said.

And although the building is still not completed, Novant Health has already put plans in place for future additions.

“We want to make sure that the building base footprint is expandable. We have built-in a reinforced foundation so that we can have a second floor. We have an elevator and a stairwell,” Parker said.

The reinforced foundation means an additional 14,000 to 15,000 square feet could be added to the second floor.

Some in the community who’ve been directly impacted by cancer have even given in-kind gifts to the institute. One resident lost his wife to ovarian cancer and his sister and sister-in-law have created a project, July 63, where they’ve made knit caps for women who’ve lost their hair. The project gets its name for each year that his wife lived.

Another citizen created crochet pads to protect those who have a Port-a-cath so that it doesn’t rub against their seatbelt.

“It’s a building that has brick but it’s the people that have made this happen,” Parker said.