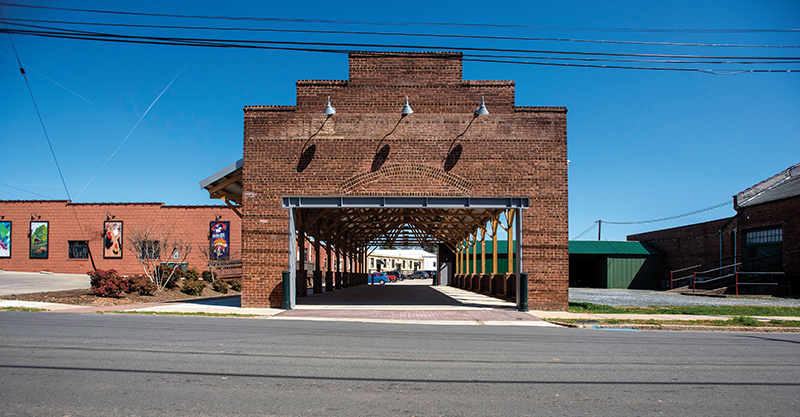 JON C. LAKEY/SALISBURY POST Railwalk Pavilion on East Kerr Street has been a welcome addition to patrons wishing to access several business. A 100-year-old brick wall that faces the road is all that remains from the original warehouse. The pavilion will be the latest addition to a growing arts, entertainment and dining district along a former rail spur that served the warehouse district.. Salisbury , NC , 3/12/20

In March 2018, the Rowan County Board  of Commissioners approved a loan to renovate the 1920s Fisher Thompson Hardware storage structure, 228 E. Kerr St.

The Railwalk Pavilion is now open. James Meacham, chief executive officer of the authority, said the pavilion will serve as the home for concerts, outdoor picnics and the Salisbury Farmers Market and be used as a driveway into the railwalk.

“The dream is it to remain dynamic,” Meacham said. “We wanted it to be a flexible dynamic space.”

Architect Bill Burgin said he pictures the pavilion as an ideal place for a community hub. The pavilion can be home to not only the farmers’ market, but artists can set up there and provide entertainment.

“It can begin drawing people there,” Burgin said. “The tipping point can be reached.”

As an architect, Burgin said he has a key interest in historical buildings. Workers repurposed metal siding to highlight the Emporium. They created the same column rhythm of the previous structure. They opened up the Railwalk to create a driveway or a “gateway” to the large parking lot.

Burgin also served on the tourism board and said he understands the economic value of attracting newcomers to the area.

It can be an attraction for people to visit Salisbury. It will also be a place for citizens to stop, he said.

The Rowan County Tourism Development Authority, Burgin said, recognized that a pavilion could be an anchor to the Railwalk district. He called the Fisher Thompson Hardware storage structure the “snaggle tooth” of that area.

Meacham said he is watching the momentum grow around the Railwalk with the addition of Team Chevy nearby and having two breweries in close proximity along with Lee Street Theatre.

The dream of a multi-faceted and multi-purposed space has been realized with the inclusion of the Salisbury Farmers Market.

David Correll, of Correll Farms, said the vendors of the market are extremely thankful to be able to use the pavilion as its new location.

The market for two seasons has been at 520 S. Main St. Correll said the location was not very customer-friendly and the aesthetics were not great.

Correll said they lost the feel of the farmers market when vendors moved to the S. Main Street location.

But excitement is building about the new location. The Salisbury Farmers Market announced on Facebook it would be call the Railwalk Pavilion its new home. The post was shared hundreds of times.

Correll said that showed the community will support the market no matter where it is.

“We made this move for the customers,” Correll said.

The Pavilion will not be able to fit all vendors of the farmers market.

Correll said the market will not condense to fit under the structure. Instead, it will spread around, which will benefit nearby businesses as visitors flood into the parking lot.

The Railwalk will be a destination for their customers.

“We can make a real sense of community in this area.” Correll said.

Burgin said he envisions an outdoor plaza that will be able to attract and build the community around it like never before. It will create an opportunity for downtown residents to buy fruits and vegetables and give Park Avenue residents, who are in a food desert, an opportunity to buy fresh foods.

The farmers’ market will open for the season April 18 at 8 a.m. to 12 p.m. every Saturday until the end of September.