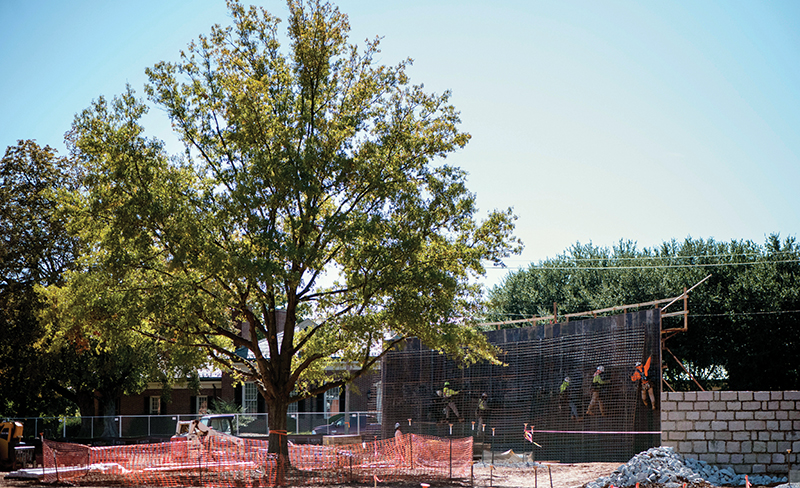 Bell Tower Green, Salisbury’s only downtown park, is more than a passive green space, say park representatives and designers. The park will be a place where everyone can celebrate together and connect with their neighbors.

The vision for what is soon to be a 3.5-acre park began over 260 years ago with the founding leaders of Rowan County seeking a common space near the Square, according to the original charter.

“It was identified by DSI (Downtown Salisbury Inc.) as a missing component that other successful downtowns in North Carolina that were growing had,” Walser said.

Discussion to make that common space possible came down to several potential sites. Its current location was picked when First Bank did not renew its lease on the building, and the property, which borders West Innes, South Church, West Fisher and South Jackson streets, sat vacant for several years.

There were conversations among the city staff and the council as well as members of the Maxwell Chambers Trust, which owned the property as part of First Presbyterian Church, sought property to build a park, Walser said. They were unable to reach an agreement. And in 2015, the city approached the Blanche & Julian Robertson Family Foundation to say, “This is the last chance to have something of this scale in downtown Salisbury,” Walser said.

In 2016, the Robertson Family Foundation bought the property, which included the Bell Tower, Gazebo Park, the former Wrenn House restaurant, over 200 parking spaces and the 1973-built bank building.

From the start, the foundation wanted the park to be environmentally friendly and feel like a natural area, Walser said.

“So some places will be a little more heavily managed and planned and engineered. Other parts of the park will be more natural and wild where you can get behind some bushes and read a book or have a picnic and you’ll feel like you’re not in the middle of town,” he said.

The master plan for the park began in 2016, and LandDesign, which came up with the layout of the park, began looking at parks of similar size, said Allison Merriman, the company’s senior associate Studio Leader.

Merriman said the LandDesign team looked at Charlotte’s Romare Bearden Park, which is one of the company’s designs, as well as New York’s Bryant Park and Jackson Square, a historic park in the French Quarter of New Orleans.

Senior Designer Jeffrey Mis said designers took the elements from those parks and asked themselves if they would work in Salisbury. The goal, he said, was to make sure they were meeting the user’s needs. Merriman said people working on the project met with city government, city planners, art groups, churches that surround the space, high school students and those living in residential areas around the park.

Once the community provided feedback, those ideas were taken to the Bell Tower Green board.

“I think that every board member will say that they are pleased with where we ended up,” Walser said.

The park may lack traditional slides and swings for younger children, but it will incorporate a creative space for artistic play, Mis said.

Board President Dyke Messinger said he is confident there will be a “huge demand” to have events at the park. One couple has delayed their wedding because they want to have the first wedding in the park.

“This is huge. Everybody wants to be there,” Messinger said.

Both Messinger and Walser said they hope the events that were held before the park project, like the Rowan Blues/Jazz Festival, Juneteenth, Fiesta de Rowan and Pops at the Post will return once the park is complete.

It will start to look a little green soon, Walser promises.

“I think the imaginations of people riding by will be able to see what, up to this point, has been an elusive vision. It will start to look like a park by the summer even if it’s not completely open,” Walser said.

By late spring or early summer, people will start to see the green. By May or June, the basic structure of the water wall feature and bathrooms will be in place.