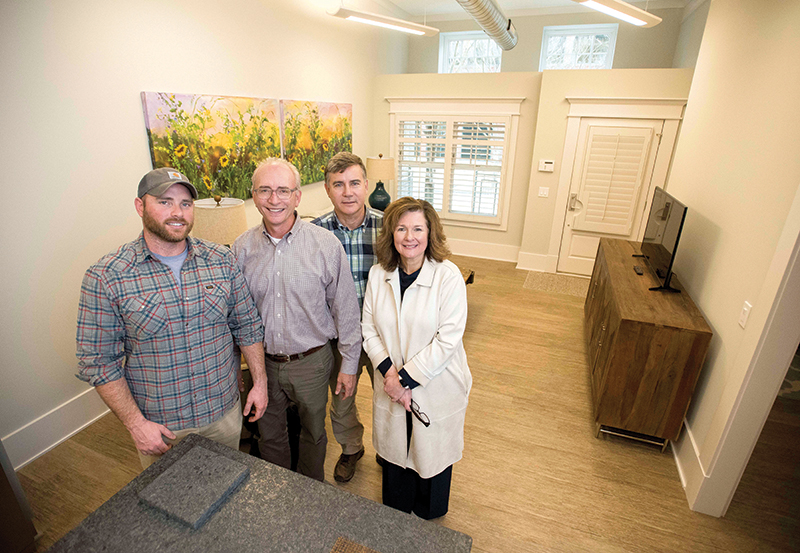 JON C. LAKEY/SALISBURY POST Ben Fisher, Luke Fisher, Danny Fisher and Property Manager Ellen Robertson in the unit that serves as a AirBnb. Fisher Reality's new high-end apartments in Salisbury on the corner of East Innes and North Lee streets were rented before the completing of the build project. The four units are roughly 800- to 850-square-foot flats, Ben Fisher said, each with an open-concept living area, walk-in closet, laundry room, parking space, and access to basement storage. Salisbury,North Carolina,2/12/20.

The Fishers have owned 132 E. Innes Street for years.

The 1910 building has gone through variations, such as a space for the Chamber of Commerce, Visitors Bureau, Elizabeth Dole’s campaign office and a bank. But as the need for office space declined and the need for quality living offerings rose, the Fishers decided to redevelop it.

It is now the 132 Flats, a three-apartment complex with an AirBnb apartment. The apartments quickly leased when they opened in late 2019, with two before they were completed.

“Salisbury, we feel like, is getting to that tipping point. So we can justify the rents to do this type of development, which is very nice and more expensive,” Luke Fisher said. “We don’t know how deep the market is. We’re not doing a lot of them. We’re doing it to dip our toe in.”

The Fishers are in the apartment business, now for three generations. It started with the late Carrol Fisher. Then, the business was passed to Luke and Danny Fisher. Now Luke’s son, Ben Fisher, is involved. Luke and Danny Fisher have been concentrating on other markets outside of Salisbury.

Returning to Salisbury made sense, especially after the success at nearby 516 Flats on West Innes Street. And Ben Fisher said the business needed to do 132 Flats, the first ground floor apartments in downtown, right.

“It’s important for the first people developing in town that you set a good example, that you set a precedent, because it could get out of control,” Ben Fisher said. “If Salisbury gets on the map, developers will be knocking on the door, and they don’t care about downtown Salisbury, like we do.”

Luke Fisher said the apartments were top-notch and well-received. Ben Fisher said the business thought about details that could last a long time and affect downtown forever.

The apartments are one-bedroom. The kitchen has custom cabinets, quartz countertops, stainless steel appliances and an island. The bathroom has a deep tub. The closet is walk in. The transom windows invite light into the high-ceiling apartment.

The 132 Flats also have designated storage and parking. They have also submitted an application for the apartment’s Green Building Standard Certification, showing it’s possible to make an old building efficient, Ben Fisher said.

“There are very few properties, if any, that are turn-key, livable,” Ben Fisher said. “Everything that is available requires significant work. A lot of that is hidden in the walls, in the floors and the roof.”

But they encourage growth.

“We love to see more people do it,” Danny Fisher said. “It’s the best thing for this town.”

The more the Fishers do, the more they will learn how to redevelop older downtown buildings, they said.

“We’ll do more, but you have to be selective and you have to be careful, and it’s expensive,” Luke Fisher said. “These old building are expensive, but that’s what Salisbury is all about: it’s about its history.”