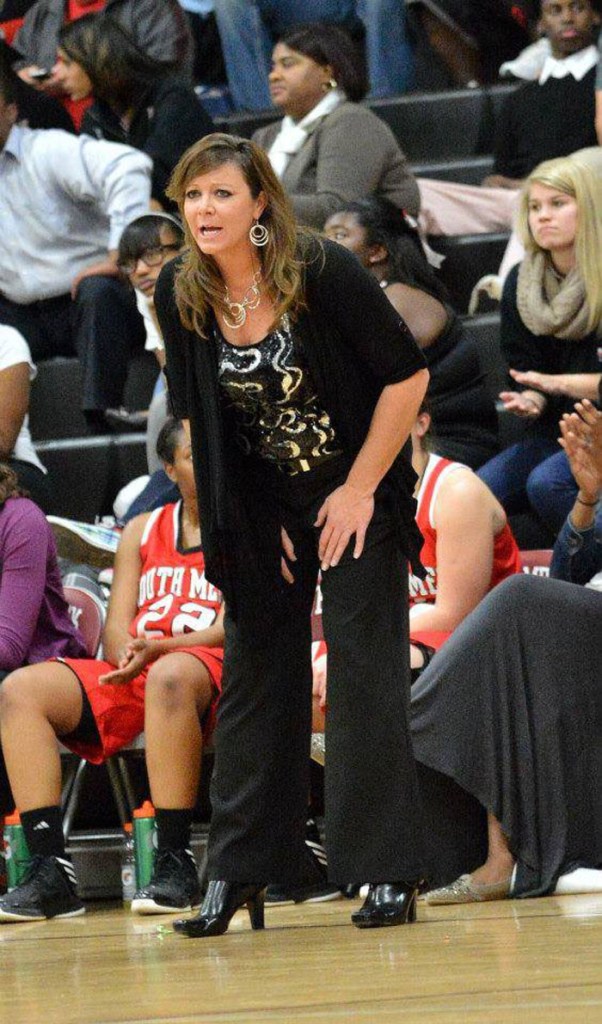 Cristie Patterson Mitchell, who had originally planned to come back to Rowan, has been working for Charlotte-Mecklenburg schools since 1998. SALISBURY POST File Photo

CHARLOTTE — Kamora Cannie has extreme quickness and a smooth outside shot and made second team All-Rowan County as a freshman playing for 1A North Rowan.

Cannie had made the South Mecklenburg varsity squad — that’s a massive 4A school with nearly 3,400 students — before a family move relocated her to Rowan County.

There’s a nice story about Cannie breaking the news to South Meck’s head coach that she was leaving.

“She told me her mom was moving to a little town that she’d never heard of and that I’d probably never heard of — some place called Spencer,” South Meck coach Cristie Patterson Mitchell said. “I told Kamora that I had heard of it.”

Mitchell didn’t laugh out loud, but she did smile. It’s a small world.

She knows all about Spencer and North Rowan. That’s where her hoops career got rolling back in the early 1990s, when she was still Cristie Patterson. Since then, most of her life has revolved around basketball.

Coached by Gary Atwell, North was very tall and very good in 1990-91 when Mitchell was a sophomore. Freshman Stephanie Cross, who eventually would score over 2,000 career points for the Cavaliers and another 1,349 points for the University of Maryland, and Monica Starks, who would score even more points than Cross during the 1990-91 season, both stood 6-foot-1. Mitchell, the small forward, was listed at 5-foot-10.

The late Ed Dupree, who was writing for the Post, made frequent references to “North’s trees” during a 22-5 season in the 3A ranks that included a conference tournament championship.

By the 1992-93 season, Mitchell’s senior year, Starks had graduated, and then Cross went down with an injury in December. That’s when life changed for Mitchell, who had always been a knees-and-elbows, blue-collar grinder. She’d averaged a modest 8 points per game her junior season, but with Cross out, someone had to score for the Cavaliers. It turned out to be her.

Mitchell scored 95 points in the five games Cross missed, 19 points per game. She accounted for half of North’s offense.

“It was all new to me — I’d always been a rebounder, a hustler, a role player,” Mitchell said. “But scoring was fun. It was different, but it was something I felt like I could get used to.”

After Cross returned, she led the Cavaliers in scoring, but Mitchell’s confidence level was up and she continued to thrive offensively. She had several games in the 20s and averaged 15.9 points for the season. She was second team all-county. She would score 680 career points for the Cavaliers.

That senior breakout led to the chance to play at St. Andrews Presbyterian College in Laurinburg.

St. Andrews was just getting started at the Division II, competing in the Carolinas-Virginia Athletic Conference, a league that is now Conference Carolinas. The CVAC in the 1990s included schools that since have moved up to the D-I level, such as High Point and Longwood.

“I was the shortest post player we had at St. Andrews, so they nicknamed me ‘Pee Wee'” Mitchell said.

St. Andrews didn’t have great teams, but Mitchell had a fine career. After being a high school small forward, she started at center in college and used her strength and tenacity to succeed against taller opponents. She scored more than 1,400 career points for the Knights. She made all-conference in 1994-95. After sitting out the 1995-96 season following a prolonged illness, she came back and made all-conference again in 1996-97.

In the 1996-97 season, she was an automatic double-double. She had a 29-for-37 shooting week against Pfeiffer, Queens and Barton that made her CVAC Player of the Week.

An ACL injury, the second one she’d suffered, meant the end for her playing career, but she was a Dean’s List student as a P.E. and Sport major at St. Andrews, so she knew basketball was going to continue after she graduated in 1998. She just didn’t no where it would continue.

“The dream always was to come back to Rowan County and coach, but no one had a job for me,” Mitchell said.

Instead, she was hired to teach and coach girls basketball at Charlotte’s Olympic High. She never looked back. She’s been working for Charlotte-Mecklenburg schools since 1998.

She left Olympic after three years when E.E. Waddell High opened in 2001. She got married in 2002.

She continued to teach and coach girls basketball at Waddell until that high school closed in 2011.

She was announced as South Meck’s new head coach in April, 2011. That meant change.

South Meck has lots of tradition, more resources, an opportunity to win championships.

“South Meck is a great place to work,” she said. “It’s really diverse, multi-national, some kids who are the children of multi-millionaires and some who are on the opposite end of the spectrum.”

Mitchell recently finished her 22nd season as a high school coach. South Meck went 25-5 in 2017-18 and had a winning season ever year since 2014-15. She has kids who enjoy being in the gym year-round.

She knows she has over 200 wins, but she’s not sure what her career record is and doesn’t lose any sleep worrying about it.

“When I got into it coaching, I was focused on getting those wins, but after a while, the wins and losses become secondary to helping kids,” Mitchell said. “You’re in this for the kids, trying to make a difference in their lives.”

The “CHC” took off in 2012 when Andrew Wiggins, the first pick in the 2014 NBA draft, played in the event. It also helped that Michael Jordan was on hand to watch his nephew play for Davidson Day. The presence of Wiggins and Jorgan brought ESPN coverage and national attention, and the tournament has continued to grow in prominence.  Now it’s ranked as one of the top Thanksgiving tournaments nationally. Four NBA lottery picks have played in the tournament, including Joel Embiid and Jamal Murray.

Last November, the CHC featured 34 teams, including 14 girls teams. Many of them were powerhouses.

Mitchell and Walker’s organization also branched out into the “Select 60 Showcase” for girls to help boost the recruiting profile of the state’s top female players.

“Recruiting opportunities for girls were many years behind the boys,” Mitchell said. “We’ve helped change that.”

Mitchell, who has a couple of basketball-playing sons in the school system, the oldest at South Meck, earned her masters degree back in 2008.

The plan was to eventually move out of the teaching/coaching ranks into administration, but that’s never been easy to do. Each year, there’s another group of players that needs her attention and guidance.  She’s continued to come back to coaching every year because there’s nothing quite like the impact a coach can have on a player. Every year it’s been, well, OK, I’ll do it one more year.

“Basketball is in my blood and I love coaching the sport for the close relationships that you build,” Mitchell said. “There’s nothing quite like going to a wedding of one of your former players or holding one of their babies. That’s bigger than winning a ballgame. I learned that a long time ago.”