FAITH — A Faith resident was charged Thursday after someone spotted her tossing donated food into the street and threatening a citizen, according to a report from the Granite Quarry-Faith Joint Police Authority. 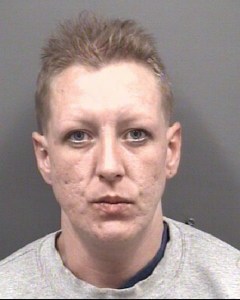 Emily Ann Lambert, 37, of the 1000 block of Gardner Street, was charged with misdemeanor communicating threats and misdemeanor second-degree trespassing. According to a report, police received a call regarding a suspicious person near Faith Elementary School.

Upon arriving, the officer noted the woman had thrown donated food from a box at the school onto the ground. The officer found Lambert at the intersection of Legion and Gantt streets. She allegedly had threatened a Faith resident and was issued a $6,000 secured bond.

According to the Rowan County Sheriff’s Office, Lambert was arrested by the agency a week ago after a resident called to report a woman they didn’t know was at their Ellen Street home in their front yard around 3 a.m. on March 15.

They asked her to leave but she refused, said Capt. John Sifford.

When a deputy arrived, the woman, later identified as Lambert, was standing in the carport of the home. Lambert told the deputy he needed to arrest the people inside the home. When the deputy told Lambert to move on, she allegedly began arguing and cursing the deputy.

Lambert showed up at another Ellen Street home an hour later, according to authorities. The caller said a woman was in their front yard and would not leave. Lambert was arrested in that incident and charged with misdemeanor resist, obstruct, delay an officer and given a $2,500 secured bond.