Some restaurants slim down, others hang on during coronavirus outbreak 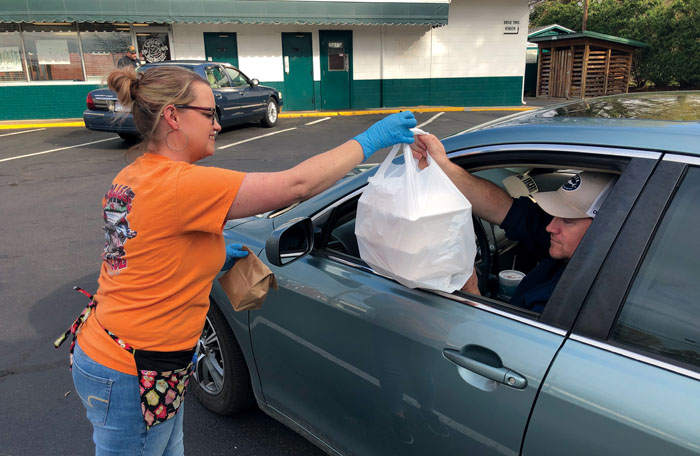 SALISBURY — As some restaurants close their doors completely due to the COVID-19 pandemic, other places are doing just enough to keep the lights on and the food cooking.

The National Restaurant Association estimates that between five to seven million restaurant jobs will be lost over the next three months due to the COVID-19 pandemic, caused by the coronavirus. Here, restaurants began eliminating dine-in service and offering only take-out and delivery orders for customers on March 17 following a directive from Gov. Roy Cooper.

The directive has led some places, like New Sarum Brewing, located at 109 N Lee St., to get creative.

New Sarum co-owner and brewmaster Andy Maben said the business began preparing to transition to take-out and delivery services only on March 15 before the governor’s directive. The staff had to complete online courses to ensure they were compliant with regulations for delivering alcohol. The beer has to be delivered in a translucent bag or in a case box so that it’s visible.

Maben has also knocked off $2 for every four-pack, six-pack or growler ordered. And as long as the total is $20 or more, the brewery will also deliver food from its neighboring food truck within a 10-mile radius.

“We’re taking it one day at a time and one six-pack at a time,” he said.

So far, it’s been enough to get by, but Maben said he had to layoff his sales employees with the guarantee they’ll be able to return once business is back up.

“(I’m going to), as long as I can, try to coast this for the next four weeks or so,” he said, adding that he’ll be left with no money in the bank and a complete reliance on his distributors. Then, he may have to resort to Small Business Administration loans to inject some cash flow into the brewery.

The biggest problem so far, he said, is that the sale of kegs has been impacted.

Maben credits an “amazing group of clientele” in the community, who “came out and tried to help support our business.”

Maben added that even the customers have been creative. Some who wish not to come into direct contact with the deliverers will tape their IDs to the window and put their face against it when their beer gets delivered.

In addition to its drive-thru, College Barbecue, located at 117 Statesville Blvd., is offering curbside pick-up with servers who come out to vehicles to take orders.

But the cost of doing business during this time has “gone up greatly,” according to owner Jay Owen. He added that the cost of supplies, including pork, are expected to increase, which will impact the amount of barbecue the restaurant is able to offer.

“It’s a nightmare getting through all the changes,” Owen said.

He added that he’s cut back on his part-time staff and limited the hours of his full-time staff.

Owen said the community support, however, “has been fantastic,” recognizing that “everybody feels helpless” and are “day-by-day trying to survive.”

Owner Yer Yang said her staff has been reduced to just one chef and herself. Additionally, she’s had to cut her sushi menu during this time because she’s unable to afford and keep fresh fish for customers. She said the to-go orders have been “just enough to keep the lights on.”

“You can only coast along for so long,” Yang said.

And though a stimulus package being moved through the U.S. government will help for a month or two, she added that even if restrictive measures are lifted in one or two weeks’ time, “things are going to pick up slowly” because of the financial impact.