The city school system has stepped up to produce bands with its 3-D printers that hold plastic face shields in place. KCS is making the bands for Atrium Health.

KCS Director of Career and Technical Education Daryle Adams said the district received an email that said the health care system needed more of the shield holders for hospital staff, and was seeking local help to print the devices. Adams said the district has 3-D printers in Kannapolis Middle School and A. L. Brown High School. So, naturally, it offered to help.

“As soon as a 3-D printer finishes one, they set it up to start making another,” said KCS Superintendent Chip Buckwell. 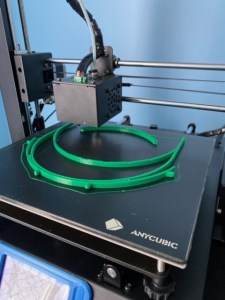 The system is printing with a flexible material so the face shield can fit around the head properly. It takes a few hours to print each one, and Adams said it takes a lot of material. The district will have to order more filament to produce the devices.

Work began on the project Friday, and the first round of five mask holders will be delivered to Atrium on Friday. Adams said the first batch is a small test run, and KCS will take feedback from hospital staff on tweaks to make sure they are comfortable and durable.

Adams never expected to be in a situation where he was co-opting school 3-D printers to produce medical supplies during a pandemic, but he is happy to be doing it.

“I’m just glad that we have the devices to do it,” he said.

Adams said he has seen the shortage first-hand because his wife works in health care. He also emphasized the importance of keeping people on the front lines of fighting the spread of the respiratory infection safe so they can continue their work.

“In a sense, it’s a war,” Adams said. “We have to make sure all our health care employees have the equipment they need, and just as in World War II how we had to turn production over to the war effort.”

Buckwell said the district wants to be a good community partner and fill a need, especially in the midst of the outbreak.

“This is an example of what happens when community partners can get together,” Buckwell said. “This might be saving lives and this just raises the bar a little bit.”