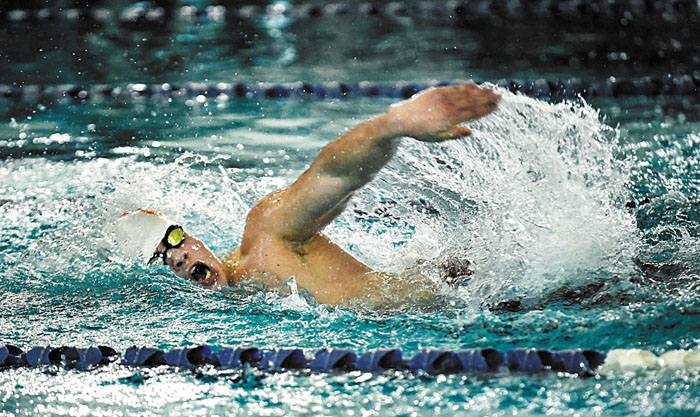 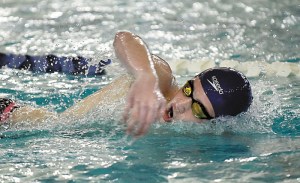 But they say there’s a first time for everything.

“I hoped that we’d be able to compete, but I knew that South Rowan and Salisbury are always so strong in the county,” Carson coach Mel Eaton said. “I would’ve been happy finishing in the top three, but our kids, they were just awesome. They were hungry. They wanted it, and when they hit the water, they swam hard.”

It was less than a decade ago that Carson’s swim team was so small that the Cougars practiced with South Rowan.

Six years ago, Carson’s John Patella made a splash as county swimmer of the year.

Salisbury (county champ in 2017 and 2018) and South (2019 winner and 15-time county champ) kept the Cougars, who made progress under former coach Caleb Helms, at bay until they broke through this season.

“Going into the county meet, I didn’t really think we had much of a chance of winning,” Carson senior Cole Dixon said. “But then we won the 200 medley relay to start off the meet.”

That was a massive win because that relay included the top swimmers from South and Salisbury. When Carson’s four standouts won that event, it meant the Cougars had a realistic chance to take the meet. They just had to keep the momentum going.

“That first event set the mood,” Dixon said. “After that, we were all super-stoked. Everyone on the team gave 100% every time they were in the water.”

With championships come individual rewards and awards. Eaton, a veteran coach, but a rookie with the Cougars, is the Post’s Rowan County Coach of the Year. Dixon and sophomore Cooper Sever are co-swimmers of the year.

Why those two Cougars? Well, they both were 4-for-4 on first places in the county meet, with two individual wins and two relay victories. Their relay mates Matthew Epley and Jacob Jackson were right behind them. Epley had a first and a second individually. Jackson had a first and a third.

South Rowan’s Braxton Vagner, who edged Epley in the 100 breaststroke with a school-record time, and Salisbury’s Roshen Amin, county champ in the 100 butterfly, qualified as individuals for the 1A/2A State Championships. They managed to score in the state — Amin got four points for 13th in the butterfly and Vagner got two for 14th in the breaststroke — but Rowan’s boys weren’t much of a factor at the state level.

Carson, which moved from the Midwest Regional to the West Regional in several sports this school year, didn’t have any state qualifiers, but as Salisbury coach Ryan Starrett pointed out, qualifying for the state in 3A and in 1A/2A are two very different animals.

Sever’s 200 IM and 100 butterfly times in the 3A West Regional fell short of getting him to the state event — he placed 13th and 12th in the regional — but he would’ve qualified comfortably in both events in any of the three 1A/2A regionals.

“I did qualify for states as a freshman (in the 500), so this was tough, a real disappointment, not to make it back this year,” Sever said. “But that gives me a goal to shoot for. I’ve got a lot of motivation to work this off-season and next season.”

While they are teammates, Dixon and Sever couldn’t have more different backgrounds in the pool.

Dixon came to swimming very late for someone who became a county champion.

“Freshman year, I tried the sport just out of curiosity and started getting into it,” Dixon said. “Then I tried club swimming, but swimming all the time was starting to cause some shoulder problems. I had to cut back to just swimming for the school.”

As a sophomore, Dixon helped Carson do well in two relays.

As a junior, Dixon finished second in the 50 and 100 sprints to Salisbury standout Roarke Burton, while continuing to contribute in the relays.

Then he enjoyed his coming-out party as a senior with his perfect day in the county meet. He won the 50 and 100 and swam on Carson’s 200 free and 200 medley relay wins.

Dixon served as team captain for the Cougars.

“That meant that I led the stretches, but mostly it meant trying to set a good example for everyone and trying to help everyone get better,” Dixon said.

This season was Dixon’s last hurrah as a swimmer. His part-time job at Olive Garden has been affected by COVID-19, but he expects to attend Rowan-Cabarrus Community College next fall. He hopes to attend a four-year school after that, but he’s also looking at his military options. He also has talent as a welder that could lead to a secure career if he decides to enter the work force.

While Dixon is moving on from the sport, Sever has a major future in the water. His father, Michael, is Catawba College’s head coach. He competes on his father’s Tidal Wave Aquatics club team almost year-round.

“I got started in swimming at 4 or 5 and was starting to swim in meets when I was 7,” Sever said.

When the Severs moved south, Cooper enrolled at Southeast Middle School, while his sister, Taylor, provided a boost for Carson’s girls program. Taylor was county champion in the 100 freestyle as a senior and also swam on the winning 200 free relay team.

Cooper made an immediate impact as a Carson ninth-grader. In the 2019 county meet, he won the 500 freestyle (that’s his favorite and best event), was second to South’s Blaise Bumgarner in the 100 backstroke and helped the Cougars place in two relays.

This season, he was individual county champion in the 200 IM and defended his 500 free title, in addition to the 200 free and 200 medley relay victories.

“The county meet was exciting because we were underdogs,” Sever said. “Any time you do something that’s unexpected, it’s exciting. I just tried to be as competitive as possible in every event I was in.”

Carson’s county success was followed by a second-place effort, behind South Iredell, in the North Piedmont Conference.

Sever has two more years of high school to keep excelling. Then he hopes to continue to compete in college.

“The dream since I was in seventh grade has been go to to the Naval Academy,” Sever said.

Whatever happens in the future, Sever, Dixon and their teammates always will be county champs. They’ll always own the distinction of being Carson’s first-ever champs in the pool.

“We had great kids and we had a great season,” Eaton said. “They put in the time and they deserved all of their success. They earned a lot of bragging rights.”