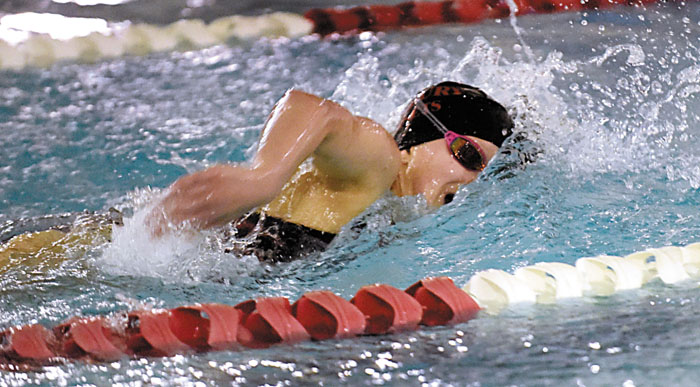 Salisbury's Emily Knorr in the 500 yard freestyle during the county swim meet on Jan. 23, 2019. Photo by Wayne Hinshaw, for the Salisbury Post 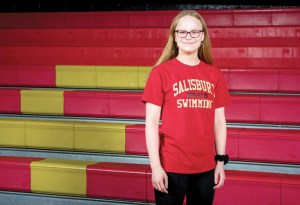 SALISBURY — Salisbury junior Emily Knorr racked up the second and third state championships of her career and made the Post’s Rowan County Swimmer of the Year award an easy decision.

The second-best swimmer in the county obviously was Emily’s twin sister, Katie, who had a third and a fourth in the 1A/2A State Championships.

Rowan County Coach of the Year also was a routine selection. Salisbury coach Sallie Pittman’s team won the county championship — and won it by quite a bit over South Rowan — even without the Knorrs. They were on a recruiting trip to West Virginia the day of the big meet at Hurley YMCA.

“It tore them up not to be at the county meet, but it all worked out for the best,” Pittman said. “Emily committed to West Virginia, and we won the meet.”

Knorr, who is considering majoring in biology, also had an offer from Penn State, but she “fell in love with West Virginia,” which has brand new swimming facilities.

Eight of the 12 girls who qualified for all-county recognition by winning a relay or finishing in the top two in an individual event in the county meet were SHS Hornets. Kate Burton had a perfect meet with four firsts, winning the 100 butterfly and 200 free and two relays.  Phoebe Hollingsworth and Leah Cressler had three firsts and a second. Anna Grace Woolly had three firsts. Meredith Burton had two firsts and two seconds. Sage Huffman had two firsts and a second. Autumn Walser swam on a relay winner, while Maggie Alexander had a second.

Team-wise, the Hornets were strong enough to beat Oak Grove and two-time defending champ North Davidson in the Central Carolina Conference meet. It was Salisbury’s first league title since North Davidson, a 4A school before Oak Grove opened about 6 miles away, moved down to the CCC. Both Knorrs went 4-for-4  in the conference meet, taking their two specialties and helping win two relays, but there also was a lot of help.

“The Knorrs were really good, but we were able to get back on top in the conference because we had some depth,” Pittman said. “You can’t win with just firsts. We’ve got a lot of girls that play other sports, so we’ve just got them for the swim season. But for four months, they put everything they’ve got into the pool. We were usually practicing from 7:30 until 9 p.m., so they sacrificed a lot of stuff for us to be a really good team.”

For Emily Knorr, sacrifice has been the name of the game for a long time. She’s sidelined right now by COVID-19 concerns, but her normal sessions with her club team, the Mecklenburg Swim Association, are 2 hours, 45 minutes, with two hours in the pool, augmented by “dry land” workouts before and after.

“It takes a lot of years of dedication to get to where Emily is right now,” Pittman said. “Sure, she’s got some talent, but she’s a blend of talent and time and effort. In this sport, you kind of have to sell yourself out to be great. I’m sure there are times when she wishes she could just hang out in front of the TV and be a normal teen-ager, but she’s totally dedicated to what she does.”

She’s not hard to get along with. Many of her best friends are her swim teammates.

“That was really the best thing about this whole season, everyone getting along and having a good time,” Knorr said. “We were hyped for the meets and we always had fun.”

Knorr looks mild-mannered, but she’s a female version of Clark Kent. She’s a competitor. Her intensity level changed when she was a freshman. She lost in the 200 free that season in the CCC Championships to North Davidson standout Morgan Dennis, who was a year older.

“Since then, she got really determined to be the best, made up her mind that no one was going to beat her,” Pittman said. “She’s embraced every challenge. She’s gotten bigger and stronger. I don’t know if she even weighed 100 pounds when she was a freshman, but now she’s getting some muscle.”

Knorr wasn’t the CCC Swimmer of the Year or even the runner-up this season.

“She was disappointed about that,” Pittman said. “I thought she was pretty clearly the best swimmer in the conference, but she’ll use it as motivation. She doesn’t mind swimming with a chip on her shoulder.”

As a freshman, Knorr was fifth in the 200 free and second in the 500 free in the state meet. Salisbury finished seventh in 1A/2A.

As a sophomore, Knorr was a close third in the 200 free. She won the 500 free, swimming almost seven seconds faster in the state meet than she had a year earlier. Again, Salisbury’s team finished seventh.

“This season the goal was to win both events in the state,” Knorr said. “I don’t want to sound cocky, but I knew I’d win the 500 if I swam my race.”

She won both events.  She took the 500 with relative ease, as she predicted, by a full three seconds.

Both her times were faster than her sophomore clockings, although she still wasn’t satisfied. She aspires to break the 1A/2A state records in both events, and she was close this season in the 200.

“I was going for it, but I didn’t make it, so I wasn’t thrilled with my time,” Knorr said. “But that’s a goal for next year.”

Salisbury also got points in the state meet from an eighth-place 400 free relay finish (the Knorrs, Huffman and Hollingsworth) and for a 13th in the 200 medley relay (the Knorrs, Hollingsworth and Woolly). The Hornets finished eighth in the team standings.

There was a lot of time in the pool and on the deck in the state meet for Knorr. She stayed sharp during the down times by swimming 50-yard warm-ups.

Fatigue is the least of Knorr’s worries. She might excel brilliantly down the road in the longer college events, such as the 1000 and the 1650.

“The pace she starts with is the same pace she’s going to finish with,” Pittman said. “That makes her special.”

Swimmer of the Year