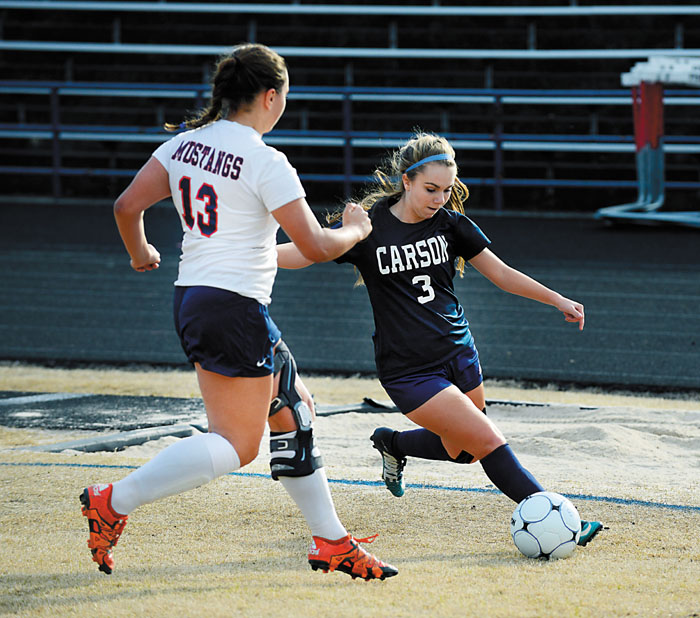 Carson's Gracie Thomason and East's Hailey Huffman go after the ball during a match on March 28, 2018.. photo by Wayne Hinshaw, for the Salisbury Post

CHINA GROVE — Carson senior soccer star Gracie Thomason is as team-first as it gets, but she had allowed herself one individual ambition.

When she found the back of the net six times in the Cougars’ first three matches this season, she boosted her total to 72 goals for four varsity seasons.

She’s the leading scorer in Carson history, but for now her career is on hold due to the COVID-19 threat.

“I did hope to make it to 100,” Thomason said. “So it’s really disappointing to have our season stopped. I just hope we can play again.”

Thomason signed with Catawba College back in the fall, so that dream, at least, was fulfilled. Family is everything to her and she wanted to stay as close to home as possible for higher education. Catawba provided the ideal fit. Catawba has a Division II soccer program that’s on the rise, with two straight NCAA tournament appearances and a swelling talent pool. Just as important, Catawba offers the strong nursing program that meshes with Thomason’s career choice.

“Catawba was always in the back of my mind for years,” Thomason said. “But meeting with the players, walking around the campus, I fell in love with it.”

She’s been in love with soccer a long time. Her first fling with sports was on the T-ball field, but once she was introduced to soccer, T-Ball was history.

“There’s no waiting around in soccer, so it was the sport for me,” Thomason said with a laugh. “I started playing club soccer in third grade and stayed with it.”

When Thomason arrived at Carson, all of her soccer experience was as a defender, but coach Lauren West made a decision to use her on the attack.

“I knew from the first moment that Gracie walked on to the Carson soccer field, that we had something special,” West said. “She had the speed and the work ethic that would make her into that strong forward that our program desperately needed, and she quickly accepted the challenge of converting into one. Three years later, she’s proven her ability to rise to that challenge as our leading all-time scorer.”

As a freshman, Thomason had a five-goal game against West Rowan, plus three hat tricks — two against East Rowan and one against Concord. She scored 19 of Carson’s 40 goals and had seven assists.

“When Coach said she wanted me to move to forward it was like, ‘Well, OK, we’ll see how it goes,'” Thomason said. “I wasn’t sure at first. But once my nerves settled down, I was ready to go. It couldn’t have worked out much better.”

For Thomason — or for Carson.

West got more than she bargained for. She not only got a finisher, she got a program-changer.

“Gracie is the type of player coaches dream of having, because she puts what the team needs over what she wants,” West said. “We’ve got a lot of soccer girls who play on a successful basketball team and most years we’ve had to start without them. Every year I talk to Gracie about where we’re going to need her to play until we’re whole, and every year she’s ready to do what’s best for our team. She’s never complained about where she plays or how long she plays.”

In Thomason’s sophomore season, Carson made the move from South Piedmont to North Piedmont and improved from 7-12 to 12-7. She had 25 goals and 13 assists. She had the second five-goal game of her career. She scored multiple goals in seven other games.

This season,  Thomason had gotten off to a super start. Carson (2-1) had scored 10 goals in its first three games and she’s scored or assisted on nine of them.

“We’ve got a hard-working team,” Thomason said. “And we have a chance to be a really good team.”

Thomason scored four times against A.L. Brown and had two goals against Davie, while raising her career assists total to 29.

“When you see her on the field, she’s constantly trying to help others score and to succeed,” West said. “She’s encouraging to her teammates, a great role model for the younger ones.”

Even though high school sports have been canceled, Thomason still continues to work on her skills individually.

If the season resumes, she’ll revive her quest for 100 goals. If it doesn’t, she’ll be remembered as one of the best ever to play for the Cougars.

“In combination with my other seniors, Gracie’s leadership has helped build a successful program and team-first mentality at Carson that will propel us to success in the future,” West said. “I feel absolutely blessed that I’ve had the opportunity to coach her.”