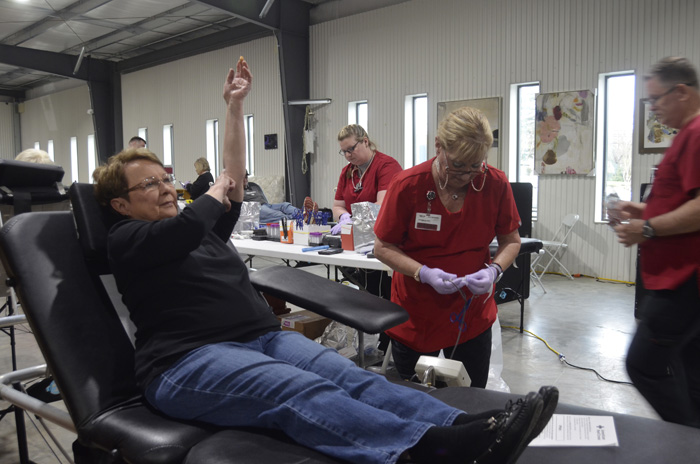 SALISBURY — Bryan Jacobsen was supposed to donate blood last week, but his appointment had to be postponed after the Hurley YMCA shut down amidst the COVID-19 outbreak.

Several days later, the Salisbury resident was able to give blood on Wednesday at the Habitat for Humanity Restore. Jacobsen said he was glad to give especially during a time of nationwide crisis.

According to Maya Franklin, external communications manager with the American Red Cross, the organization has been hosting “pop-up” drives because of recent cancellations, including at schools, churches and other locations. That’s contributed to a shortage of blood.

But in the face of cancellations, there have also been community partners, like Habitat, who agreed to host an emergency donation drive.

Jacobsen, like some others at the site waiting to give, received an alert via the American Red Cross app about the new donation site. Others received a text via Habitat for Humanity that it was a location for a blood donation drive.

Jacobsen said donating blood is a way to give during the coronavirus crisis that doesn’t cost a thing.

“As long as you’re healthy,” he said.

Franklin said she wants to assure people that blood donation is a safe process. Staff are checking temperatures and adhere to social distancing guidelines as well as constantly sanitizing surfaces that donors touch, including the beds. Hand sanitizer is also a fixture.

“We’ve definitely stepped up our sanitizing procedures and are trying to only allow people to donate blood who are healthy and well,” Franklin said.

Donna Smith, who gave blood Wednesday, received an update via email and has donated blood in the past.

Smith said the main reason she gave was, “because of what’s going on with the coronavirus and because of the fact that so many people are not able to give there’s such as shortage.”

All blood types are needed from donors who are not sick, Franklin said.

Before donating and entering the location where a blood drive is taking place, each person is checked to make sure they have a temperature no higher than 99.5 degrees. Each person is asked a series of basic questions about travel, being exposed to the virus and being a caretaker for someone who has tested positive for the virus.

Potential donors can sign up for the American Red Cross app. Once downloaded, users can enter the zip code where they reside or an area that is convenient.

“There, you can make an appointment to donate blood or first-time folks to donate platelets. There is a need for platelets as well at our donation centers in Huntersville and Dilworth on Park Road,” Franklin said.

The app allows the user to keep track of past donations, some health history readings and take “selfies” on the app to get notifications of where their blood has been distributed.

Those who do not have the app can still make an appointment via www.redcross.org or call 1-800-REDCROSS.

Anyone who would like to give blood today, can make an appointment via the Red Cross app, the website using sponsor code: Salisbury Community or call or arrive at the Habitat for Humanity Resale Store. The store is located at 1707 S. Main Street, Salisbury, from 10 a.m. to 2:30 p.m.