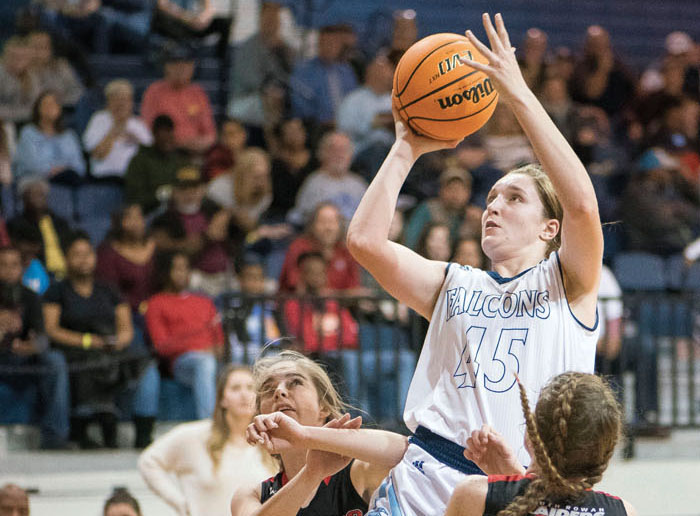 MOUNT ULLA — Individually, you can’t have a better season than West Rowan senior Abigail Wilson had.

The 5-foot-11 forward was an easy choice as Rowan County Player of the Year. The consistent UNC Asheville signee broke a stack of program records, including points in a season (681), scoring average in a season (26.2) and points in a career (2,191).

One program record Wilson didn’t break was career scoring average. Her mother, Wendy Hampton Wilson, who starred for three seasons for the Falcons in the 1990s before heading to Florida State, still holds that one — barely. Abigail averaged 20.47 points over four seasons. Wendy averaged 20.51.

She also averaged 11.5 rebounds per game,

“She might not have been the most athletic kid on the court all the time, but she would out-work anybody,” West coach Ashley Poole said. “I never coached a kid who wanted it more.”

This was a season Poole had waited for and Wilson had waited for. There were high expectations for West, which had five senior starters.

West fulfilled some of those hopes and dreams. The Falcons went 20-6.

It was a year in which Rowan County had five girls teams that won at least 20 games. West beat all of them at least once. One of Salisbury’s two losses was to West. Two of Carson’s four losses were to West.

“I thought we had a great season, thought the seniors really stepped up to the plate,” Wilson said.

West played 11 of its 26 games against county opponents. Wilson averaged 25.7 points in those games. That was remarkable production because Salisbury, Carson and East Rowan all allowed fewer than 40 points per game for the season. Those were stellar defensive teams. Wilson put up 28 against Salisbury, averaged 25 in four games against Carson, managed 24.3 in three games against the Mustangs.

Wilson scored 44 percent of West’s points, a staggering total for one person on such a good team. That stat encouraged double-teams, but the Falcons found ways to counter-punch.

“Some teams were doubling me after I caught the ball, but we adjusted and started hitting me with a pass on the move before they could bring the double-team,” Wilson said. “And I got better at recognizing the defense and finding the open man,” Wilson said. “A lot of times if there were two on me, Whitley (Arnott) was wide open underneath.”

“Seeing her go through what she did and still seeing a smile on her face every day, seeing the strength she had each day, that put a lot of things in perspective for me,” Wilson said. “Even if I didn’t have a great game, I was healthy. There wasn’t much to complain about. My mom was going through so much more.”

The peak for West’s season came early — the Dale’s Sporting Goods Sam Moir Christmas Classic. As the No. 2 seed, the Falcons had to beat Salisbury and Carson on back-to-back nights, but they were up to the challenge. They beat the Hornets by 14 in the semifinals, the only game Salisbury would lose before the 2A West regional final.

Wilson’s mother had surgery the morning of the Salisbury game.

“No one expected her to come to that game, and I told her just to stay in bed and rest,” Wilson said. “But I’m in the game and I turned around and she was standing there with a big smile on her face. That meant a lot to all of us.”

Wilson scored half her team’s points and led the Falcons to a 52-49 win over Carson in the Moir championship game, the first title for West since 2012. Wilson totaled 82 points in the tournament and was a no-brainer choice for MVP.

“When we played Carson, I remember Coach Poole told us that was the biggest crowd we’d ever play in front of in our lives and we played about as well as we can play,” Wilson said. “That was an amazing experience, definitely the highlight of the season. It meant everything to the seniors. All of us will remember that night forever.”

Wilson was an efficient scorer, shooting 54 percent from the field and 74 percent from the foul line. She didn’t take a lot of 3-pointers, but she made almost half of her attempts. She showed improved ball-handling and passing skills as a senior and played good defense.  She should be able to make the transition to being a small forward or a “stretch 4” at UNC Asheville.

“She loves the game and she’s totally dedicated to it,” Poole said. “She was a dream to coach. She’s going to do whatever it takes to make sure her team is successful.”