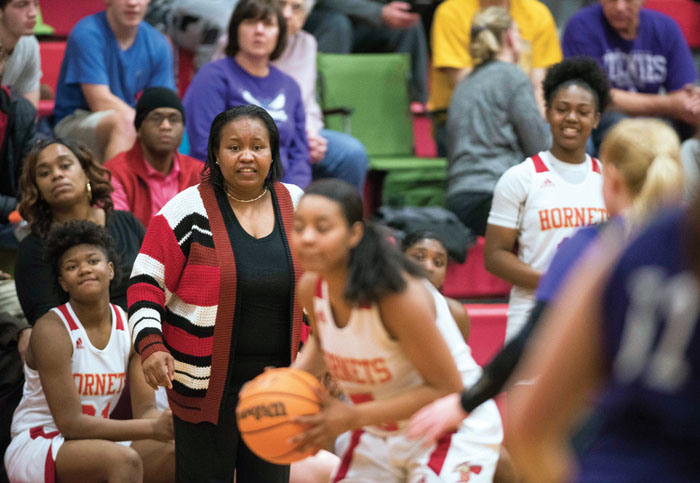 SALISBURY — On the court, Salisbury’s girls were the county’s youngest basketball team, but a bunch of 15-year-olds played a very old-school game.

It’s not easy selling a team on a defense-first philosophy in 2020, but the Hornets bought in. This Salisbury team scored fewer points per game than the previous three, but it claimed more victories.

Brice orchestrated a stunning 29-2 season that put the program back on the map as one of the best in 2A. Salisbury arrived at least a year ahead of schedule.

It was a year of terrific girls hoops in the county. West Rowan, North Rowan and East Rowan all won 20, while Carson won 25. But the Hornets were the last team standing. They reached the regional final, and the win over Forbush that got them there had to be the best win of the season by any Rowan team. Forbush was loaded with solid seniors, but the Hornets pulled out an incredible game.

Brice is the Post’s Rowan County Coach of the Year for the second time. She also was honored in 2016-17, when the Hornets improved from 14-12 to 21-3 and won the Central Carolina Conference championship.

Brice is 120-64 in seven seasons at Salisbury, a winning percentage of .652. She’s eighth all-time on the county wins list. She’s first among African-American coaches.

Even Brice wasn’t all that confident initially. Troutman was an intimidating presence — a sure 15 and 15 every night. Salisbury was going to be smaller and less physical without her, and the Hornets also had lost quickness with the departure of buzz-saw guards Jinika Glenn and Chantal Robinson.

“I don’t know that I saw this team doing what it did right away, but (assistant coach) Robert Hairston did see it,” Brice said. “He told me that this group was special. He said we could compete for the CCC championship. Then in our second game, we played Dudley (a 3A team that would win 20 and a conference title) and we beat them pretty good. That’s when I started thinking Robert was right. You never know about freshmen, never know how quickly they’re going to be able to adjust and catch up to the speed of the varsity game. Varsity is a lot different than middle school, but our freshmen caught up fast.”

One of those freshmen, Bryant, is Brice’s daughter, so she’s been well-schooled since she’s been old enough to hold a ball. She doesn’t possess crazy athletic ability, but she plays under control like a 30-year-old WNBA veteran. She sees everything. She knows when to shoot and when to drive and when to get the ball to someone else. She’s a scorer and a passer and a ball-handler and a defender and a pretty decent rebounder. That’s about everything. She had an offer from D-I UNC Wilmington before she played her first game for the Hornets.

One of the other freshmen, Huntley, is blessed with crazy athletic ability. She’s not a consistent scorer yet, but even as a freshman she gave the Hornets a lot of the rebounding and shot-blocking Troutman always provided. Huntley’s vertical leap is astounding. Girls don’t normally jump like that.

“So much God-given talent,” Brice said. “Just a great athlete.”

Salisbury was 7-0 when they arrived at the Dale’s Sporting Goods Sam Moir Christmas Classic at Catawba. East Rowan and West Rowan also came into the event undefeated. Carson had lost once. There was plenty of hype, plenty of anticipation.

In the semifinals, West’s five seniors, taller, as well as older, made the Hornets look young. Salisbury lost 60-46.

The third-place game the next day was a key test because no one feels like playing in a third-place game. There’s a lot of carry-over disappointment from losing in the semis. The Hornets handled the situation with surprising maturity, Bryant scored 15, and the Hornets beat a good East team, 50-41. That victory started a 21-game winning streak.

The final pieces of the puzzle fell into place in January for an ego-less team. Bryant and senior Anayia Fulson were the scoring leaders, but both would average a modest 13 points per game.

Fulson could’ve scored more, but her focus was on leading. There were nights the Hornets needed her defense or her ball-handling more than points, so she didn’t take a lot of shots.

“She had a great season,” Brice said. “Her best season. She did everything we needed her to do.”

The Hornets got a lot of 9s, 10s and 11s in the scorebook from sophomore 3-point shooter Rachel McCullough. Huntley and sophomore Jaleiah Gibson averaged 15 tough points between them, and Morgan proved to be a perfect sixth person, able to defend guards or forwards.

But mostly the Hornets did it with defense. In their 12 CCC regular-season games after Christmas, North Davidson was the only team that managed to reach 40 points. The Hornets beat the Black Knights 61-47 and 61-43.

The Hornets had an unusual bench, veteran reserves — seniors Jonnesha McEntyre, Jaliyah Oats and Janesha Mashore and junior Jania Bolder. There were games when none of them scored, but they were always part of it.

“People probably don’t realize how important those girls were to our success,” Brice said. “Even when they didn’t play much, they never got an attitude. They were always encouraging teammates and holding teammates accountable. We did a lot of things together away from the court, and that helped this team build a strong bond. We played hard and we played together, and when you do those two things, you can accomplish a lot.”

There was some adversity. The Hornets lost Hairston’s calming presence and defensive expertise for a chunk of the season.

“That was a blow,” Brice said. “His knowledge has been the foundation of our program.”

The Hornets helped fill the void with former coach Andrew Mitchell’s advice. Mitchell’s 2009-10 Hornets set a school record, allowing just 29.4 points per game on their way to a 29-0 season. This season’s Hornets had the program’s stingiest defensive numbers since 2009-10 — allowing 34.9 per game.

“I look up to Coach Mitchell and learned some things from him, and he said he learned a few things from me,” Brice said. “That made me feel pretty good.”

Brice was an outstanding player at Catawba. People might remember her as a scorer because she poured in 1,441 points and still ranks ninth in program history. She shot 46 percent from the field, which was exceptional for someone who took a lot of 3-pointers.

People may not remember how good Brice was defensively. She played 20 years ago, but still holds the Catawba program record for steals in a game (9), in a season (112) and in a career (324).

So maybe it wasn’t a surprise that this team made its mark defensively on its way to going 18-0 in the CCC and adding the conference tournament championship.

In the first three rounds of the playoffs, the Hornets allowed 33, 33 and 24 points and won very easily. In the third round, they shut out Ashe County for an entire quarter.

Forbush was next. Forbush had ended Salisbury’s season in 2018-19, chewing up the Hornets in the third quarter and pulling away, but the rematch would include a momentum-changing 3-pointer by Bryant to open the second half and the fourth quarter would provide the finest moments of Fulson’s career. Fulson led four Hornets in double figures with 19 points. Gibson, playing with a sprained ankle, got a critical rebound off a missed free throw that led to Fulson’s game-deciding bucket.

“We showed in that game, and all season, really, that we had a winning mentality,” Brice said. “Anayia played feisty this season, and our younger girls followed her lead.  We always kept fighting.”

Salisbury finally had its 21-game winning streak halted by Newton-Conover in the regional final in Hickory. Bryant scored 27 points in a breakout performance, but Newton-Conover’s 6-foot-3 senior Chyna Cornwell might be the state’s best player. She carried her team to a 65-53 victory.

But the Hornets stayed in it, they didn’t stop scrapping, and they expect to be strong again next season, even without Fulson.

“We lose another outstanding player, but I know we’ll keep putting in the work to be great,” Brice said. “This is a special group.”